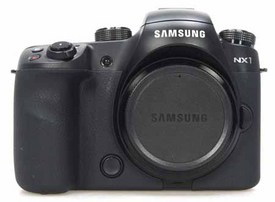 In the mirrorless versus SLR camera debate, you could say that Samsung has thrown down something of a gauntlet with the NX1. With this flagship model, Samsung has created a very compelling reason for SLR lovers to consider a mirrorless model, and for fans of camera makers with long histories and hundreds of compatible lenses, to possibly try something new.

Most importantly, the NX1 delivers very high image quality with its 28MP BSI APS-C CMOS sensor. BSI stands for "back side illuminated", a technology that improves low light performance by keeping the sensor's light-capturing elements unobstructed by circuitry. As a result, the camera produces very little noise in images shot at high ISO settings, and you can crank it up to 25600.

There are loads of customizable and sophisticated features. Three of the four positions on the four-way control aren't even labeled because you are left to assign them the function of your choosing. There are three dials in all - one behind the shutter button, another on the top of the back panel, and a larger dial around the four-way control dubbed the command wheel.

Dedicated buttons make it easy to perform numerous tasks without having to navigate through a cumbersome menu. You get buttons for auto exposure lock, activating auto focus, turning on the electronic viewfinder (although there is also a sensor that's on by default), and connecting to a mobile device. And even when a menu is needed, the touchscreen and dials function smoothly to avoid unnecessary hassle. The Fn button serves up an icon-driven menu where you can change many settings with a simple finger swipe without having to go to a second menu. In addition, there are dedicated buttons atop the camera for changing the AF mode, ISO, metering mode, and white balance. These sit atop a dial for quickly changing the drive mode.

The burst modes deliver lightning-fast performance, even when capturing RAW files. In high-speed burst mode, I shot JPEGs at 13.9fps, capturing 78 shots in 5.6 seconds. Shooting in RAW also whizzed along, at 11.5fps, and did not fatigue quickly - the camera was able to capture roughly 18 to 23 shots before slowing to a modest 0.8fps. When capturing RAW files in regular burst mode at 5fps, the NX1 chugged along for over six seconds, recording 31 shots before pausing and resuming at a slower 1.8fps pace.

Rounding out the camera's flexibility is the built-in flash, which recharges quickly and can be used at two burst mode speeds. In standard burst mode, you can shoot at 1.3fps with the flash. At high-speed burst, the camera captures images at 3.3fps. The flash throws around a fair amount of light for a built-in model, with a drop off somewhere around 15 to 18 feet. The flash is spring-loaded and you raise it by pressing a button just below it. There also is a flash shoe for attaching an external flash.

The NX1 excels at auto focus. It's quick and adjusts well to moving subjects. The hybrid AF system has 205 phase-detect points, which covers 90 percent of the frame. Together, these make the camera a valuable tool for sports photography, combined with its formidable burst modes. Paired with the touchscreen function, you can make adjustments quickly to make sure you get a sharp shot. You can tap on the screen to position your AF box both when shooting stills and while recording video. And while recording video, the camera does not just focus in haste and create a nauseating visual; rather, it exercises a little patience so the adjustment is gradual.

I tested the camera with the 45mm lens. With a maximum aperture of f/1.8, this fast lens is arguably best suited for portraits and stationary subjects you want to isolate with a shallow depth of field. The relatively new NX lens mount offers limited lens selection, but if you are looking to buy your first interchangeable lens camera (and you aren't bringing a lens collection to the table), the selection may suit your purposes. The 45mm lens, like many others by Samsung, has an iFn button you can customize. It also has a switch for shooting in 3-D.

Shooting with the 45mm lens, I was very happy with the image quality in almost all situations. Colors tended to look very accurate, and details looked very sharp. And, shooting in low light was not hampered by any dramatic rise in digital noise at a modest ISO. You will see in the studio shots on our Samples Page that the NX1 introduces very little noise, even at the highest ISO settings.

I did notice, however, that some shots suffered from reds that looked oversaturated (note the photo of roses on the Samples Page). Also, the camera tended to use a large aperture setting with the lens, even when I was shooting landscapes in broad daylight - even when I'd chosen the Landscape scene mode (or, Smart Filter, as it's called). This sometimes resulted in some blurry details in the distance.

But color can be a subjective thing. And the camera gives you plenty of customizability to make it suit your eye. For example, every white balance setting can be tweaked using an on-screen grid - that includes all presets. The camera also offers a white balance bracketing feature you can quickly access with the drive mode dial, so you can quickly capture a few different color treatments. This same bracketing position can also be assigned to perform auto exposure, Picture Wizard, or depth bracketing.

The LCD sports a very high resolution. Images are very crisp and colors look vivid. The screen folds upward 90 degrees and downward 45 degrees, which can help you get creative angles low to the ground or get a shot while holding the camera over your head. One quibble, however: I found it difficult to fold the screen outward. There is only one small lip to help you get a grip on the edge of the LCD. I found myself repeatedly digging with my fingernail to get under the screen's edge.

When it feels easier to track a moving subject while looking through a viewfinder, and feeling more connected to the camera, you can use the electronic viewfinder. The EVF is of a high resolution, but the fact remains that you are looking at a screen and not through the lens via an optical viewfinder. If you are using manual focus, you are relying on the camera's magnification feature - when you press the shutter button halfway, the on-screen image magnifies to help you lock focus, with the aid of focus peaking, which highlights the edges of the objects in focus. If you are shooting very active subjects, such as at a sporting event, you may run up against the refresh rate of the LCD or electronic viewfinder. I certainly found it difficult at times to shoot in burst mode while monitoring my framing on the LCD. And while looking through the electronic viewfinder was an improvement, it still did not match the experience of looking through an optical viewfinder while panning to track movement.

Outfitted with all varieties of wireless - WiFi, NFC, and Bluetooth - the NX1 can easily share directly to a smartphone or hop on a wireless network. Using the Samsung Camera Manager app, you can use the remote viewfinder feature and use your Android smartphone to trip the shutter. I did not find this setup as easy as with previous Samsung models, however. This particular app was not, apparently, in Google Play, so I had to change a privacy setting on my smartphone to install the app.

The Li-ion battery is rated to last 500 stills. This CIPA rating assumes 50 percent flash use. But if you use a fair amount of burst mode and significantly less flash, as I tend to, you could get a lot more mileage out of it. In my testing, the camera captured almost 900 still images and a few short videos before calling it quits. You have to charge the battery in the camera with what comes in the box, though you can pick up an optional external battery charger.

Bottom line - The NX1 offers just about everything you could ask for in a serious camera: very high image quality, fast autofocus, quick burst shooting, and copious controls (including touchscreen). The only potential pitfalls are the limited lens selection, lack of an optical viewfinder (which is germane to mirrorless technology), and the not-quite-stellar battery life - but an extra battery and external charger can be had. If those don't deter you, the NX1 will likely wow you.