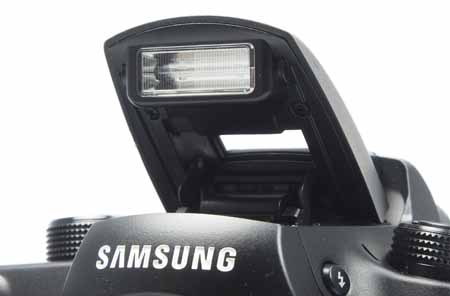 Built-in flashes are rarely a highlight on sophisticated cameras, but this one comes close. It scatters around a healthy amount of light for its diminutive size. Better still, it refreshes quickly, allowing you to use it in both regular burst mode, and in high-speed burst mode. That is not to say that the camera can shoot as fast with the flash as without - not even close - but the simple fact that you can shoot at two speeds continuously using the flash is a big plus. In my testing, the camera shot at 1.3fps in standard burst mode, and at 3.3fps in high-speed burst mode.

The NX1 offers a flash shoe for attaching a more powerful external flash.


The NX1 has both a stero microphone and a stereo headphone jack behind one door. Behind a separate door are the HDMI, USB, and shutter release ports.


The electronic viewfinder activates automatically when your eye nears it, whether in shooting or playback mode. If you tend to activate it accidentally in playback mode, you can turn this feature off and use the EVF button beside the viewfinder to turn it on.


The memory card slot sits behind a spring-loaded door around the corner from the back panel controls. You slide the door back and it pops open.

You have to charge the Li-ion battery in the camera using what's included in the box. But you can buy an external battery charger separately.

The battery is rated to last 500 shots (CIPA standard), which uses 50 percent flash. In my testing, using a fair amount of burst mode and a small percentage of flash, I recorded almost 900 still images and a few short videos before the battery called it quits.