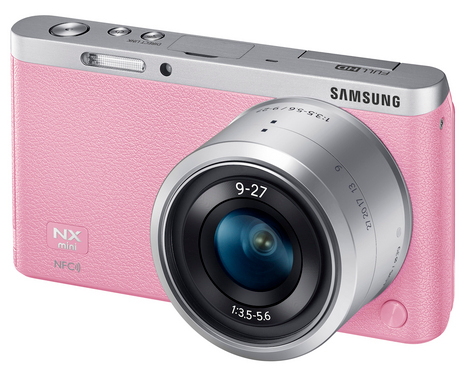 In early 2014, Samsung announced the world's slimmest and lightest ILC, the NX Mini. Dubbed the the "selfie" camera, the NX Mini is a compact SMART camera available in five different leatherette finishes -- white, pink, mint green, brown and black.
Despite its compact size, the NX Mini boasts some impressive features, notably a 20.5-megapixel BSI CMOS image sensor (1-inch type), 6fps bust shooting, and Full HD (1080/30p) video capture. The biggest selling point, however, may be the 3.0-inch (75.2mm) Flip Up and Touch Display, which will allow you to frame selfies and group shots perfectly. Find it too difficult to find the perfect pose AND press the shutter button at the same time? Samsung says no problem. They've included "Wink Shot", which will automatically take a photo two seconds after a wink is detected.
Finally, this SMART camera includes built-in Wi-Fi and NFC technology to back up photos and share to the web via compatible smartphones and tablets (you need a free app). Exclusive to Samsung products is "Tag & Go" connectivity, which allows pairing the NX Mini to a compatible device simply by touching the two together. From there it's easy to to transfer multiple images to phones via Mobile Link, or even share images with up to four devices via Group Share. Even cooler? You can uses your smartphone as a secondary display and remotely control the NX Mini using Remote View Finder Pro. And, should you love taking selfies AND have a newborn in the house, why not turn your NX Mini into a Baby Monitor via an app that activates your smartphone whenever the NX Mini detects noise.
FYI, the NX Mini is NOT compatible with current NX lenses unless an optional mount adapter (ED-MA4NXM) is used. Otherwise, Samsung is debuting an all new mount system, dubbed the NX-M series. Two new lenses -- the NX-M 9mm f/3.5 ED and the NX-M 9-27mm F/3.5-5.6 ED OIS -- will be available as kit lenses on the same day as the cameras release. A third lens -- the NX-M 17mm f/1.8 OIS -- will be available at a later date.
Samsung NX Mini Features:
The Samsung NX Mini is available in two different kits: the $449 version is paired with the 9mm NX-M lens, and for $549, the NX Mini is paired with the 9-27mm NX-M lens. Also, the 9mm and 9-27mm NX-M lenses will be sold separately for $179 and $279, respectively.
Additional Product Views