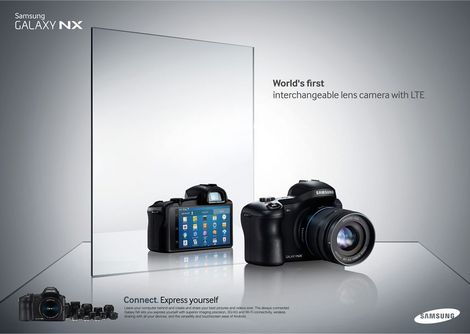 Samsung today announced the GALAXY NX, the world's first ILC (interchangeable lens camera) with LTE, 3G/4G, and WiFi connectivity. In other words, Samsung has built an entry-to-mid level ILC that runs off the Android operating system just like your Galaxy smartphone or tablet. Not only can you choose from "an entire universe of Android apps" -- apps to help edit and and special effects to 20.3 megapixel images and Full HD video -- but you can then instantly share your final product anywhere at blazing speeds to Facebook, Instagram, YouTube, and more.
With a 1/6000 sec shutter speed and 8.6fps high speed continuous shooting, you might think the GALAXY NX is only for experienced pros. Worry not. If you've ever used a Google smartphone, you already know how easy the menus are to navigate. Plus, Samsung includes a number of newbie-friendly features such as Photo Suggest, which suggests places to take great pictures based on your location; Story Album, which allows you to create customized digital photo books; an Advanced Hybrid Auto Focus (AF) System; Camera Studio, which lets users customize settings on their most frequently used apps or modes; and 30 Smart Modes.
What are Smart Modes? Here are three examples: "Multi Exposure merges two different shots together to produce one distinctive image, while Animated Photo connects continuous shots of up to five seconds, creating a moving GIF file. For added realism, Sound & Shot stores sound and voice together as the picture is taken, so moments are captured exactly as they happened."
Samsung GALAXY NX Features
Pricing and availability for Samsung's new GALAXY NX remain TBD.
Additional Product Views