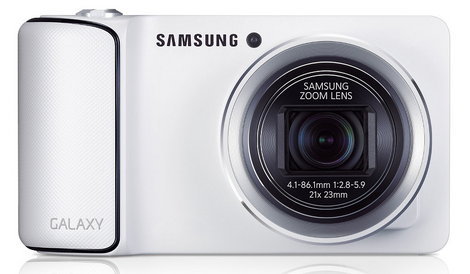 The Samsung Galaxy Camera is the second model to use the Android operating system, following last year's Nikon S800c, but the Galaxy Camera is the first to use the Android version 4.1; aka Jelly Bean. Samsung has done a good job of merging the features of a mid-range digital camera with the natural interface of a smartphone in creating the Galaxy Camera, which makes it very easy to share photographs immediately after you shoot them with others through e-mail or through social networking sites.

With its 4.8-inch high-resolution LCD touchscreen, the Galaxy Camera features one of the largest LCD screens that's available on a digital camera currently in the marketplace. While preloaded with various apps, you can download more from the Google Play store, similarly to any other Android powered device. Samsung didn't forget the photographic features, either, offering a 16-megapixel CMOS image sensor, a 21x optical zoom lens, a popup flash unit, a rechargeable battery, and full HD video recording. Automatic and full manual modes are available with the Galaxy Camera.

The Samsung Galaxy Camera is available in Cobalt Black or White, and comes in three configurations:

See our lowest price button above for the most current online pricing.