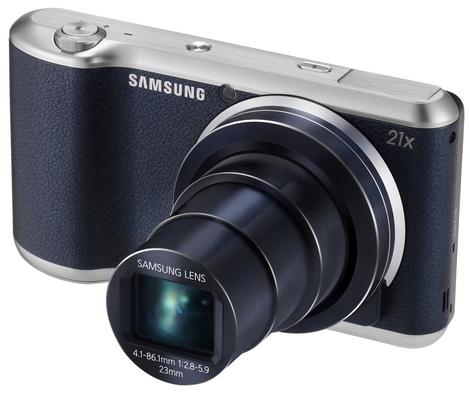 Samsung has made a few improvements to its GALAXY Camera, re-branding it the GALAXY Camera 2 for 2014. If you already own last year's model, you may not want be ready to take the plunge, and while the surface specs are quite similar, the Camera 2 boasts a number of key improvements, including enhanced battery life, a new 16-egapixel BSI CMOS image sensor, which is not only better in low light conditions, but also gives this smartphone the ability to capture Full HD 1080p video.
Other Camera 2 upgrades include 2.0GB of internal RAM, a pre-loaded Dropbox app with two years of free 50GB cloud storage, and NFC (Near Field Communication compatibility). With NFC, you can pair the Camera 2 to another Android smartphone or Tablet with the Tag & Go feature, Photo Beam pictures automatically to paired devices, Mobile Link to select images to transfer between devices, and the Remote Viewfinder feature to control the camera remotely via a second screen.The GALAXY Camera 2 also features a long 21x optical zoom lens, 28 Smart Modes for various shooting conditions, and it runs on the Android platform, given users access to tons and tons of apps. Finally, along with full HD video, the Camera 2 offers Multi Motion Video, which records super fast or super slow motion footage at a reduced resolution.Samsung GALAXY Camera 2 FeaturesPricing and availability have not yet been confirmed. However, the original GALAXY Camera cost $449.99.
Additional Product Views