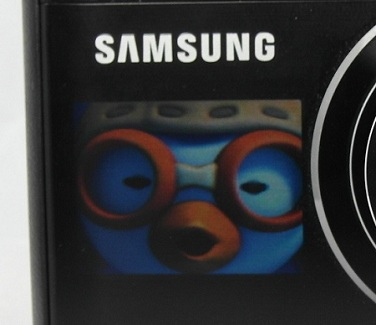 Although the discussion of a camera's Features & Controls usually starts with a look at the lens, it's the LCD on the front of this DualView DV300F camera from Samsung that will grab your attention first. When you activate this 1.5-inch LCD, you can display the image that will be photographed to simplify the act of shooting a self-portrait; you can display a countdown for shooting self-timer images; or you can have an animation play (shown here) that will hold the attention of children while you shoot their photos. Partly because the animation is accompanied by audio, this feature really does work pretty well.
When the front LCD is powered down on the black version of the DV300F, it's almost impossible to see, almost making this camera look like any other digicam. Keep in mind that the front LCD isn't a sharp or high-powered LCD, offering only 61,000 pixels of resolution, but it works well for the tasks Samsung designed it to perform.

The DV300F includes only a 5x optical zoom lens, which is on the low end of cameras in today's market. Obviously, with the LCD on the front, this DualView camera is designed specifically to shoot portraits, so a large zoom lens isn't all that important. This lens covers an equivalent focal range of 25 - 125mm, along with an aperture range of f/2.5 to f/6.3, which is pretty good for a sub-$200 camera. The lens is coupled with a 1/2.3" CCD image sensor, which offers 16-megapixels of resolution.
Even with such a small zoom range, it still takes more than a second for the lens motor to travel through its full zoom range. The DV300F lens does have at least 10 stops within its zoom range, which will help you achieve the most accurate focal length for each particular shot. This is another feature that works really well for portrait photos. The lens only extends a little less than 1 inch from the camera when at its full zoom length, and the lens fully retracts inside the camera body when the unit is powered down. A cover protects the glass when the camera is turned off.
The measurements for the TTL AF range for the DV300F are:
The DV300F contains a small built-in flash unit along the top of the front panel of the camera, just to the left of the lens housing. You can see it, along with the autofocus assist lamp, here. With a camera designed specifically for portrait photos, it'd be nice to have a larger flash unit, but the flash on the DV300F works pretty well for close-up shots.
The unit has a flash range when shooting wide-angle photos of 0.66 to 13.45 feet (0.2 to 4.1 meters) and a range at the telephoto end 1.64 to 5.25 feet (0.5 to 1.6 meters).
There are several flash modes available with the DV300F, including Auto, Auto & Red-eye Reduction, Fill-in Flash, Slow Sync, Red-eye Fix, and Flash Off, which is helpful for finding just the right flash for a portrait photo. For a point-n-shoot camera, the DV300F recovers pretty well after using the flash, although you'll still have to wait a few seconds between shots when using the flash.

The right area of the top panel of the DualView DV300F has your standard buttons, including the shutter button on the right -- surrounded by the zoom ring -- and the power button just to the left of the shutter. The power button is slightly raised away from the camera body, although it'd be nice if it was a little bigger and a little more extended from the body.
The DV300F has no mode dial.
The left area of the top panel of this Samsung camera contains the F.LCD button, which allows you control the front LCD. Press this toggle button to turn on or off the front LCD screen. By default in Smart Auto shooting mode, the front LCD will display the image that will be photographed, but by changing the mode in which you're shooting, you can change what's displayed on the front LCD.

The LCD display screen on the back of the DV300F is a really nice model, measuring 3.0 inches diagonally. It also has 460,000 pixels of resolution, which provides sharp images.
You can pick from three different brightness settings with this Samsung unit, including Dark, Normal, and Bright. Or you can allow the DV300F to set the brightness automatically through the Auto setting. If you're shooting outdoors in sunlight, use the Bright setting to minimize problems with glare on the LCD screen.

Along the right side of the back panel of this Samsung DualView camera, you'll find the control buttons. Along the top of the control panel are the Home and Menu buttons. The Home button gives you access to the majority of the primary menus and settings for the camera, including the Program, Movie, Special Effect/Magic and Scene menus, as well as the main camera settings. The Menu button provides quick access to a few of the camera's most used settings, such as the Flash and Photo Size menus.
In the middle of the control panel is the four-way button, which is what you use to navigate through the many on-screen menus with the DV300F. Because this camera has no mode dial, you must use the four-way button quite a bit to move through menus, and I thought this button was a bit too small to be used comfortably. It also isn't raised enough away from the camera, making it tough to press the button accurately at times. The four-way button includes the Disp button along the top, which determines what's shown on the screen as you're preparing to shoot; the Self Timer button on the right; the Macro button along the bottom; and the Flash button on the left. The settings that are available through each of these buttons depends on the mode in which you're shooting.
The bottom two buttons on the control panel include the Playback button on the left and the Delete button on the right.
Samsung has included a micro USB 2.0 slot behind a sturdy hinged door on the right side panel of the camera. The DV300F has no HDMI slot.

The latched door on the bottom of the camera hides the rechargeable battery and the microSD memory card. (You also can also use a microSDHC or microSDXC card with the DV300F.) The latched door is on a spring and is held in place by a toggle switch, which is nice.
You won't find a separate battery charger included with the DV300F, as Samsung chose to put together a design that forces you to charge the battery inside the camera through a USB cable that connects to an adapter.
You're going to find that the battery lifespan with the DV300F will depend greatly on how you will use the camera. If you use the front LCD and the animated mode quite a bit, along with the Wi-Fi capabilities, you're going to drain the battery more quickly than if you use this DualView model more like a typical point-n-shoot camera.
During my tests, I found that the battery life for this camera to be a bit below average for a point-n-shoot camera, providing about 2 to 2.5 hours of battery power. That's not terrible, although for a camera that doesn't have a large zoom lens, you might expect a bit more battery life during normal operation.