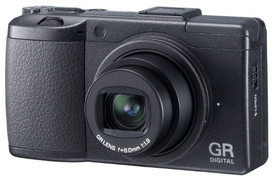 For 2009, Ricoh has updated their sophisticated GR Digital II with several upgrades. The all new GR Digital III offers almost an identical body design, which is not only compact, but very stylish with a professional look and feel. Some of the new features on the GRD3 include a new 28mm equivalent fixed lens, which offers the same focal view we saw with the GRD2, however this newly designed unit offers an even greater aperture range, with a maximum aperture of F1.9.

Resolution has been left unchanged, with the same 10-megapixels of resolution, however Ricoh claims the GRD3 offers a new "high sensitivity" CCD image sensor. Other improvements include macro focusing down to 0.39 inches (1cm), an impressive 3.0-inch LCD with 920K dots, more powerful Li-ion battery pack, GR Engine III image processor, new Dynamic Range Scene mode, along with loads of cool accessories. Like its predecessor, the GRD3 is aimed more towards the enthusiast user who is looking for a sophisticated compact camera that offers loads of manual control as well as excellent performance and image quality.

Like I mentioned above, the GRD3 features the same exact body design and layout of the GRD2. While offering an almost "retro" 35mm film
camera look from the front, the GRD3 still gives you all of the features of a modern
day
digital camera on the top and back. We found that most of the controls were placed in a comfortable position, and worked well without any problems. However, the rocker switch at the top right on the back can cause a few issues. First off, it's in the same position that one would find a zoom control on many compact digicams. While this doesn't seem like a problem at first, it did in fact cause a couple small head aches. This switch can control various camera functions, with the default setting being exposure compensation. So, if you were to accidentally hit the switch thinking you are going to zoom the lens, you will have just added some level of exposure compensation, which could really affect the quality of the image you are trying to capture. While the switch is very handy once you get the hang of it, I foresee many users having similar problems due the habit of using his type of operation to control a zoom lens.

Overall, I found the camera fit very well in my large hands, and was easy to operate with one or two hands. This is possible mostly because of the nice large hand grip on the right hand side of the camera. Ricoh has continued the use of the locking mechanism on the mode dial that we saw on the GRD2, which is a unique function that will help ensure you don't accidentally change the exposure mode. The new 3.0-inch LCD was a pleasure to use in all lighting conditions. This is the only viewfinder on the camera, unless you purchase one of the optional optical viewfinders that attach to the flash hot shoe. With a nice anti-glare coating, there are virtually no angles which reflect the light, which could cause problems with seeing your subject. The LCD also produces a crisp image with good color reproduction. This is by far one of the nicest displays you will find on a compact digicam. The onscreen menu system hasn't changed much, and offers logical organization, which allowed for quick and easy navigation. Like past models, Ricoh offers loads of useful accessories that will
help further enhance the versatility of this camera, including a wide
angle conversion lens, several carrying cases, an external flash unit,
etc.

Shooting performance from the GRD3 was pleasing. It was able to capture its first image after start up in about 2.3 seconds. The shutter delay (aka shutter lag), was instantaneous when the camera was prefocused, and a blazing fast 1-2/10 of a second including auto focus. The shot to shot in single shot mode was also very good, averaging only 1.7 seconds between frames with the flash off, or 1.9 - 2.5 seconds with the flash enabled (depending on the power output). There are also 3 separate continuous shooting modes. First is the standard Continuous mode, which allowed me to capture 10 shots in only 4.9 seconds (2.0 fps). Next we have M & S Continuous modes, which record 16 smaller images in a sequence, then save them as a single 10-megapixel image. Both modes captured 16 images in just 1.8 seconds. M Cont. will save the last 16 images and S Cont. will only record 16 total. All of our timing tests were
done using an OCZ Class 6 4GB SDHC memory card, ISO auto, Auto mode, flash off and all other settings to the factory default unless noted otherwise. Times may vary depending on lighting conditions, camera settings, media, etc.

Much like its predecessor, the GRD3 captures beautiful photos that show a pleasing amount of contrast and sharpness, which gives images a crisp look. Colors are very natural, and the cameras Multi exposure metering system helped the camera capture good exposures in various conditions. Image noise is very low for a compact camera when using ISO 800 and below, thanks in part to the "larger" 1/1.7-inch CCD image sensor, which offers almost double the surface area to that of a sensor found in your typical 10-megapixel consumer digital.

While some may see a camera that has no zoom, or a fixed lens as inferior, that is quite the contrary. The GRD3's 28mm equivalent lens offers a great deal of versatility when wanting to capture sharp images, especially when there is very little light. This newly designed lens offers a maximum aperture of F1.9, which will allow you to capture blur free hand-held images at much slower shutter speeds than possible with your typical compact models. You can see for yourself by looking at some of our aquarium photos on the Samples page. While some are a bit on the dark side, these images still offer a good amount of detail, and one could easily brighten them up with a bit of positive exposure comp., or in an image editor. Overall, I feel this lens compliments the GRD3's new image sensor nicely, with very few aberrations or lens distortions.

I was a bit disappointed to see that Ricoh did not upgrade the video or movie mode options on this new model. Some form of HD video capture is almost standard on digital cameras these days, and the addition of a 720p (or better) HD video option would have really added to the appeal of this camera. Disappointment aside, the GRD3 does capture nice clean VGA video, which plays back nice and smooth thanks to the real-time, 30fps frame rate. Sound is clear, however the mic is very sensitive and does pick up a lot of back ground noise.

Ricoh has beefed up the Li-ion battery pack on the GRD3, with a new 3.6v 1250 mAh pack (compared to the 1150 mAh unit that was included with the GRD2.) They claim you can capture up to 370 shots on a single charge. I was able to capture about 345 sample, with various short video clips, on a single charge. Overall, this is pretty good battery life, however I do recommend you pick up a spare pack just in case. If you're in a bind, you can also use two AAA batteries to power the camera, however don't expect more than 25-35 shots on a set.

Bottom Line - like its predecessor, Ricoh's latest GR Digital model in not your typical consumer compact digicam. This is a very sophisticated camera that offers a wealth of exposure options, along with very high-end features. These include a larger imager 10-megapixel sensor, high-resolution 3.0-inch LCD with 920,000 pixels, a bright 28mm fixed lens, and much more. Aimed more towards your advanced photographers, the GRD3 would make a great backup camera for a professional who would like to carry around a compact model for quick snap shots, that still offers plenty of manual controls. But, don't let that scare you novice users away. The GRD3 also offers very tame Auto and Program modes, which perform well with little to no fuss. With a MSRP of US$699, the GRD3 is one expensive digicam. So, if you are one who is in the market for a very well-built camera with some outstanding features, and price is not an issue, look no further.

Ricoh has announced an updated firmware for the GR Digital III