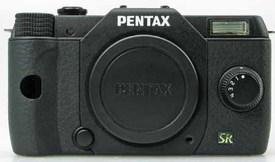 The Pentax Q7 is in a small, attractive package. The rugged magnesium alloy body measures just 4 inches wide by 2.3 inches tall and 1.3 inches deep (not counting the protruding lens). With the ability to swap lenses and a wealth of manual controls and filter effects, the Q7 seeks to deliver an SLR-like photographic experience in a pocket-size form. However, the CMOS sensor in the Q7 is also small (1/1.7-inch), contributing to less-than-stellar image quality compared to other EVIL (electronic viewfinder interchangeable lens) cameras, especially the APS-C sensors found in EVIL cameras made by Sony and Samsung.

Using the flash shoe, you can attach one of six external flashes to get more powerful illumination, including an external flash ring for macro aficionados. At press time, there were seven lenses in the Q series: two fixed focal length lenses, the standard 3X zoom we tested, a 15mm-45mm telephoto zoom, a fisheye lens, and two toy lenses.

The Q7 offers a lot of versatility in a tiny package. One unique feature is the quick dial located on the front of the body. Its four positions can be assigned a handful of features, including user-selectable custom settings. The default settings are four of the nine Smart Effects, which produce a variety of color treatments, such as Vintage Color and Warm Fade. You also can set the dial to change the aspect ratio or focus method, but in some instances this is not as rewarding as being able to assign each position a different Smart Effect. That's because when using the dial to switch from autofocus to manual focus, you get just the two options, each one assigned duplicate positions. This is the same when assigning ND filter to the dial - you get two "on" positions and two "off" positions. If you could split the difference and get to Smart Effect assignments plus an on/off for another setting, it would be even more useful. One side note: You need to remember to put the Quick Dial back to its off position; otherwise, it overrides the mode dial selection - you will find yourself turning the mode dial to Auto, but the LCD will continue to say the camera is in Program mode. Also, while in a Quick Dial setting, you cannot use the menus to change those settings.

The camera's built-in effects are attractive. The Smart Effects and digital filters offer a wide variety of creative options. There are 11 digital filters, and each one comes with at least one parameter adjustment. When choosing a digital filter in the menu, you use the dedicated exposure compensation button to access these adjustments. In many cases this is just a simple intensity tweak, but some filters offer more. For example, the extracted color filter lets you select two colors and the range of each. The shading filter offers six shading types and a +/-3 level intensity adjustment. With all of this creative control at your fingertips, it seems almost beside the point to mention that there are 21 scene modes available to assign to the scene mode position on the mode dial. Especially considering that this camera can shoot in HDR mode as well as capture RAW and JPEG files simultaneously.

The camera gets kudos for being able to shoot in burst mode with the flash - and to be able to go and go (I stopped at 25 continuous shots). However, with flash the burst is at a slow 0.7fps. This is same speed when shooting at RAW+JPEG (fine) without flash - again, notable the camera can do it, but not a high performer. The biggest stumbling block in burst mode for this camera is that the focus is locked at the first frame. This is especially problematic when trying to capture fast action - which is, after all, when you most need burst mode. Here also is where you run into the limitations of not having an optical viewfinder. If you are having to pan with your subject, and are zoomed in somewhat close, you will be playing a guessing game as to whether your subject is in the frame. You will find yourself often looking at a blank LCD, and turning off the instant review will not bring a preview image on-screen.

This lack of auto focus after the first frame in burst mode resulted in a lot of blurry photos in my testing. In general, I found the auto focus lacking in quick response and often unable to grab onto my subject. The camera uses contrast detection AF, which is arguably slower than phase detection AF at tracking moving subjects. However, the camera does offer a variety of auto focus menu options, including face detection and tracking AF. When switching to tracking AF instead of relying on auto AF, I got better results.

The camera also offers manual focus, and the 02 standard zoom lens I tested has a focus ring. Unfortunately, you'll have to dive into the menus to turn on manual focus, rather than being able to flip a switch on the lens barrel or camera body. To help you achieve sharp focus while looking at the LCD, the camera offers focus peaking, which highlights the edges to help you lock onto your subject. You can also enlarge the image by a user-selected magnification by simply turning the focus ring. All of this is very handy, though still not as ideal as looking through the lens via an optical viewfinder.

The pop-up flash on the top of the camera is an attractive design feature. Springing upward on a hinged arm, the flash sits a full inch above the camera body. This both helps to reduce redeye in portraits, and avoid casting a long shadow of the lens barrel (that is, if using the 2.25-inch deep 02 standard zoom, which I used in my testing). You can see the result of this on the Samples Page. The company does not publish a range for the flash on its website, but in my testing I found it to be usable up to roughly 15 feet. That is, able to moderately illuminate subjects at that farthest distance, but not necessarily powerful enough to attractively light a group shot and a background that far away. Built-in flashes are rarely so powerful, and that's why the Q7, like any serious camera, offers a flash shoe for attaching an external unit.

When shooting with the built-in flash in Auto and Program modes, I was surprised to find that the camera often used high ISO settings. Typically, using a flash helps a camera keep its ISO low, and thereby reduce digital noise. But in my testing, indoor shots I took with ambient daylight coming through the windows, the camera often chose to use ISO settings as high as 2400 or even 3200 with the flash firing. The results were unattractive, with lots of splotchy textures obscuring edges and details. And in manually setting the ISO, my results were not much better. At the lowest ISO settings, my indoor shots were too dark. Only beginning at ISO 400 did my shot look adequately lit, and at ISO 800 I saw a noticeable drop-off in fine detail - evident enough to see when zoomed in by 4X on the modest-resolution LCD.

Unfortunately, the Q7 does not deliver top-notch image quality at lower ISOs in broad daylight either. A close inspection of afternoon landscapes I shot showed a lack of sharpness in detail. In addition to the contrast-detection AF at times being slow, shots of static subjects at optimum focus still lacked the sharp detail you'd expect from a camera this sophisticated, and at this price range. The inability to focus happened more frequently at higher magnifications with the 02 standard zoom lens. And, as previously mentioned, the camera only focuses for the first frame in burst mode, so any change to the zoom will result in a blurry shot.

The video quality of the Q7's full 1080p movies is on a par with compact digital cameras. You won't get the quality of a high-end camera or digital camcorder, but it is certainly adequate. But distortion at the edges when using the zoom lens, plus what seemed to be jittery anti-shake, contributed to less-than-smooth results. When panning in movie mode, the optics of the lens seemed to distort the edges so much (in order to accommodate the small sensor) that the effect was potentially nauseating. Also, the anti-shake mechanism seemed to do a somewhat jittery job of reducing hand shake; again, not entirely pleasing to watch. I found these attributes distracting with stationary subjects, but not noticeable if there is a lot of movement in the video.

Battery life was impressive in my testing. Though the battery is rated to last just 250 images when using the flash half of the time, or 260 images without the flash, I was able to record 449 photos and 20 short videos on a single charge. Admittedly, very few of those photos were shot with flash; but still, 449 is significantly more than 260 shots.

Bottom line - The Q7 offers a lot of attractive features and manual controls in an appealingly small package. But its performance puts it in the point-and-shoot category rather than the prosumer class - which fails to justify the price ($500 for body only at press time), or further investment in additional lenses. Mediocre image quality, high digital noise, lack of auto focus in burst modes, and slow auto focus in general, make the Q7 hard to recommend. If you only take snapshots that won't run up against these limitations, and you just have to have the smallest interchangeable lens camera possible, the Q7 will fit rather than cramp your style.