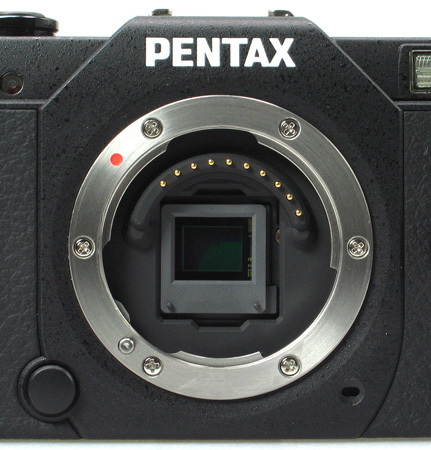 The Q7 has a 1/1.7-inch backlit CMOS sensor that can capture 12.4 effective megapixels (12.76 MP total). This is notably smaller than other EVIL and four-thirds cameras offering interchangeable lenses.

The camera can record RAW and JPEG images simultaneously, though at a slower speed in burst mode than JPEG-only recording.

The camera uses contrast detection auto focus, and you can focus manually with the focus ring on the lens barrel.

At press time, the company website offered seven Q series lenses, including a wide-angle toy lens, telephoto toy lens, and fish-eye. The web site lists the 01 standard prime lens as the one included with the camera body; it has a fixed focal length of 47mm (35mm equivalent), a maximum aperture of f/1.9 and maximum shutter speed of 1/2000 second.


The four-position dial on the front of the camera body is called the Quick Dial. The default setting is Smart Effect - each position corresponds to a different photographic effect, such as brilliant color and warm fade. In addition to the nine effects you can assign to one of the four positions, you can assign one of three user-selectable custom settings.

You also can assign one of four other functions to this dial, but this can be limiting. Focus peaking and ND filter, for example, only offer on and off, which means that you get two positions for on and two for off (you can't mix and match Smart Effects and focus peaking on/off to the four positions).


The 3-inch TFT LCD offers a modest 460,000-dot resolution. As a result, you won't see the finest details in your images, not when trying to focus manually (though the camera does offer focus peaking, which highlights edges to help you lock focus accurately).

Note that the Q7 does not have a viewfinder, so you will have to frame all your shots using the LCD. In most cases, this is no hindrance - the screen is sufficiently bright in almost all occasions, though its slick coating is quite reflective, which can be a little distracting. Where this is a serious hindrance is when shooting in burst mode - with the refresh of the image on the LCD unable to keep up with the pace of high-speed shooting, it is unlikely you'll be able to keep a moving subject in the frame for all your shots. You'll be left guessing, especially if you have zoomed in substantially to capture somewhat distant action.


The mode dial is located on the right side of the top of the body, falling beneath the index finger. It sits beside the shutter button. The thumb dial sits behind the mode dial.

The built-in flash, flash release switch, and playback buttons are located on the left side of the top panel. This placement of the playback button takes some getting used to if you're accustomed to this button being on the back panel (where most cameras have it). It makes image playback a two-handed operation.

Note also the flash shoe for attaching an external flash. At press time the company offered six external flashes, including a ring flash.

The Q7's flash doesn't merely pop straight up - it swings up on a hinged arm like a miniature crane. But it's not just for looks (let's face it - this extension puts the flash arm at risk of injury). Take a few flash shots with the flash down in poorly lit conditions, and you'll see that this distance from the camera body is necessary to avoid a long shadow from the protruding lens barrel.

There is no range for the built-in flash mentioned on the company website or in the manual, but in my testing it had a usable range up to roughly 15 feet. On the Samples Page, you will see this in IMGP0443, which was taken in completely unlit room with the flash down (thereby causing the big shadow from the lens barrel at bottom right). However, "usable" does not necessarily mean "attractive". The flash is not adequate for illuminating a near subject and a background at the farthest distance of its range. Also, when my subject was close, I found the flash in Auto mode tended to overexpose faces.


The back panel has a familiar layout, with a thumb dial at the top and a four-way control surrounded by various buttons. No surprises on the four-way button assignments; these are dedicated to selecting (clockwise from top) the ISO, drive mode, white balance, and flash mode.

The AV +/- button pulls up an exposure compensation on the LCD for quick adjustment. The green button below it can be assigned one of five functions.


The Q7's ports are on the bottom of the camera, recessed behind a rubberized flap. The camera comes with a USB cable but does not include HDMI or AV cables.

The SD card port is on the side of the camera, around the corner from the four-way control.


The rechargeable lithium-ion battery is housed on the opposite side of the camera as the SD card, behind a spring-loaded door. You charge the battery out of the camera in the included battery charger.

The battery is rated to last 250 images (with 50% flash use) or approximately 260 images without flash. But in my testing (admittedly with a low percentage of flash use), the battery recorded an impressive 449 photos and 20 short videos before calling it quits.