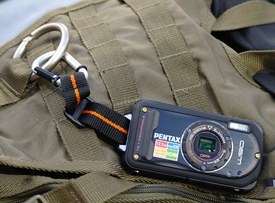 For 2010, Pentax has updated their "lifeproof" line of rugged compacts with the all new Optio W90. Dubbed their "11th generation waterproof digital camera", this unit builds off of the popularity seen from past models, like the Optio W80. Many of the core features of the W90 have not changed from its predecessor, such as the 12-megapixel image sensor and 5x optical zoom lens. However, Pentax has added a great deal to the ruggedness of this model with a redesigned, tougher exterior and increased water depth and shockproof ratings. The W90 can now be taken down to depths up to 20 feet (16.5 ft. on the W80) underwater, or dropped from as high as 4 feet (3.3 ft. on the W80). Pentax also added a larger 2.7-inch LCD screen, HDMI output, new LED lamps mounted around the lens for macro shooting both above and underwater, and a new Digital Microscope scene mode. Like past models, the W90 boasts dustproof and "coldproof" (14°F/-10°C) specifications as well.

While the body shape of the W90 has not changed much (it still has a nice rectangular shape), they have added some "toughness" to the body. The exterior has a much more rugged feel, with hardened rubber accents and a metal "face". Pentax also added a larger wrist strap mounting point that accepts their new heavy duty strap that uses a carabiner (a clip used by rock climbers, etc.). This allows you to hang the camera on your backpack, belt loop, etc.; I even attached it to my camelbak pack while we were out and about. Overall I love the look and feel of this camera, it just screams TOUGH.

The control layout has been untouched, all the same controls remain in almost the exact same positions on the camera's body as with past models. I found that each button is well labeled and of good size. Pentax also left enough room between each button to ensure you don't press more than one at the same time. One handed shooting is simple and comfortable, however I still think a zoom control mounted around the shutter release would be much easier to use than the rocker switch on the back: however this is a personal taste, some may like this setup more than I do. The larger 2.7-inch LCD is a welcomed addition. It offers a much large view of your subject, and menu text is more legible compared to the 2.5-inch screen on the W80. While it offers the same resolution (250k dots), the live image still looks good under most lighting. They claim the LCD features an anti-reflective coating, however I found that was not 100% accurate: there are still many angles which reflect light. Thankfully, the live image is bright enough that these reflections should not hinder you from seeing your subject(s).

Image quality from the W90 is similar to that found on the W80, considering they share the same imager, processor, and lens. Overall, the camera produces nice 12-megapixel photos for a camera in this price range. Outdoors the camera captured good exposures with accurate color reproduction. Images are also nice and sharp, with only slight edge softness along the right hand side of the frame. Image noise is a bit higher than I'd like to see when viewing images at 100% (aka pixel peeping), with moderate amounts of speckling noticeable even at the lower ISO settings. This is unlikely to be seen in small prints, however they may rear their head when creating large prints or tight crops.

When shooting indoors, you will have to work within the limits of the small built-in flash. When using ISO Auto, it does well with subjects no more than 8-10 feet away at wide angle. However, if you plan on zooming in tight to your subject, or manually setting the ISO for the best quality possible, the flash range will be reduced noticeably. Our indoor close-up portraits show good flash coverage and pleasing skin tones, however like we noted earlier, there's a considerable amount of noise present when viewing images enlarged (75-100%) on a PC monitor.

One cool new feature on the W90 are three tiny LED lamps mounted around the lens. They claim these are for use with the new Digital Microscope mode or when shooting close up macro subjects; the W90 can focus on subjects just 1cm away from the lens. The LEDs don't produce enough light to illuminate anything over a few inches away, however they do help when shooting extremely close objects.

The 5x optical zoom covers an equivalent zoom range of 28-140mm. This is a nice range for a compact camera, as it gives you a good amount of framing possibilities. The wide angle end is good for indoor shooting, large groups, or landscape photos, while the telephoto end of the zoom will help you to tightly frame subjects. It will not however bring distant subjects up close; a super-zoom is needed for that job.

Using the W90 underwater is a snap, you simply set the camera to the preset "Underwater" scene mode; there are separate still photo and video options. These settings have been optimized to help you produce the best possible photos underwater. In order to get pleasing shots, you're going to want to be sure the water you are shooting in is nice and clear. Pools and some bodies of water will produce nice photos, however your typical pond or river will more than likely be too dark and murky. One tip we want to add, you'll want to be certain you always clean off the lens after shooting underwater or in the rain. Water spots on the lens will produce some unwanted aberrations in your photos from dry land.

Not only can you shoot photos underwater, the W90 can shoot video underwater as well. You have three resolution options when shooting video, 640x480, 320x240 and 1280x720. The frame rate can also be set at either 15 or 30fps; the latter will produce the best quality videos, but with larger file sizes. The movies produced by this camera are typical for a consumer point-n-shoot. Video is nice and smooth with good exposure and colors, however there's a good amount of noise; especially in lower lighting. The microphone also picks up the slightest breeze as well as all kinds of background noise. When filming in the rain, you'll notice that the microphone position is less than ideal, as drops of water strike the top of the camera. You can see some examples on our samples page, including a rain and drop test we performed on the camera while using it at a local Cleveland Indians game.

Battery life is decent for a compact camera. The tiny 3.7v, 740mAh Li-Ion rechargeable battery provided with the camera can net you about 200 photos on a single charge according to Pentax. This sounds pretty accurate, as we captured about 150 photos, several short video clips, along with some extensive use of the menus and playback before having to recharge the battery to finish up our tests. I highly recommend you pick up at least one spare battery pack to keep with you, especially if you are planning a vacation.

Bottom Line - Pentax has created an appealing "lifeproof" camera with their new Optio W90. The W90 offers some nice improvements over past W-series cameras, class average image quality, good shooting performance, and loads of useful scene modes. Not to mention this is one tough camera. I truly enjoyed using this little guy, and out of all of the lifeproof models I've tested, it "looks" the coolest in my opinion. However, looks are not everything. Thankfully, the Optio W90 is not only pleasing to the eye, but performs well too. You can also check out the Olympus Stylus Tough 8010 and Panasonic Lumix DMC-TS1 to see some of the W90's direct competition. With a street price ranging from $260-330, the Pentax Optio W90 offers a great deal of versatility for the active lifestyle, and is sure to stand up to just about anything you can throw at it.

See our news post for more details by clicking on the link above of the photo below.