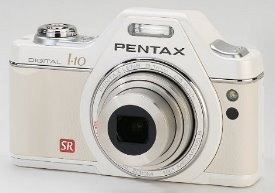 Retro appears to be the new "look" this season as Pentax has joined in creating a throw back feel to their ultra compact Optio I-10. The old style look is off set by new technology with 12.1 megapixels of resolution, a 5x wide optical zoom lens and a 2.7in. LCD, which are crammed inside the I-10's petite frame.

The I-10 is lightweight and compact enough to fit into a pocket pretty easily, but it has almost a toy-like feel when you hold it in your hand. The top bump of the camera would be the most obtrusive thing about it, but at the overall size of the camera I do not think it is an issue. As far as the controls go, all buttons are a decent size and I really didn't fumble with them. The only real frustration I had was with the zoom control. This unit is mounted at the top of the camera, wrapped around the shutter release. This is a common feature (and our favorite type of zoom control), but where Pentax mucks it up is that they mount the tab facing the back of the camera as opposed to the more common front facing tab. So instead of using your index finger to control zoom, you have to use your thumb which is already doing the work of running the back controls. While this isn't a huge hurdle to cross, it is odd and uncomfortable at first.

While the feel of the camera failed to impress, the image quality was definitely up to par. We took tons of pictures at the zoo and at a local car show and with the exception of the bright sunlight causing some blow-out, it did great. The colors were true to life, images were crisp and the OIS kept the pictures blur-free as we road the train on our safari trek. The I-10 also offers the ability to take pictures at a 16:9 ratio which creates a cool wide-angle photo but image quality will drop down to 9-megapixels. I was also impressed with the panorama mode, the couple I took turned out very good. I was equally impressed with the flash, which was powerful enough to light up our close range subjects. However, remember that this is a tiny flash unit which is not going to have the power to illuminate open rooms or subject beyond 6 feet or so; without boosting the ISO.

The I-10 offers video capture in all the standard formats and in addition to choosing whether to shoot in HD, VGA or QVGA, you can choose to shoot at 30fps or 15fps. The difference being that 30fps will create a smoother video with a larger file size, and 15fps will be less smooth, but a smaller file size. Keeping in mind that this is a ultra compact digital camera, the I-10 did great at taking video. The clip on the samples page is sharp and the colors are rich; again realizing what's taking the video. I did find that indoors where lighting is effected, the video was definitely more "grainy". The optical zoom can not be used while recording video, however you can either preset the focal length or use the digital zoom; the latter of which we recommend using sparingly.

Power for the I-10 comes from a rechargeable lithium-Ion battery. The corded charger will plug into any standard outlet and a second battery pack can be charging while you're shooting with another. Pentax claims that you can capture up to 250 photos or 100 minutes of video on a single charge (using CIPA Standard testing). Currently I have taken 144 pictures and several short videos as well as turning the camera on and off a lot during the review process with power to spare.

Bottom Line - The Pentax I-10 is a nice ultra-compact camera that takes good quality images and video for a model in this category. The retro looks adds style to the mix as well. With a street price of $250 US, the Optio I-10 offers a competitive value, however we highly recommend you look at some of the other models in the $150 - $250 price range, such as the Panasonic Lumix DMC-ZS1, Sony Cyber-Shot DSC-W330 or the Canon PowerShot SD980 IS to name a few.