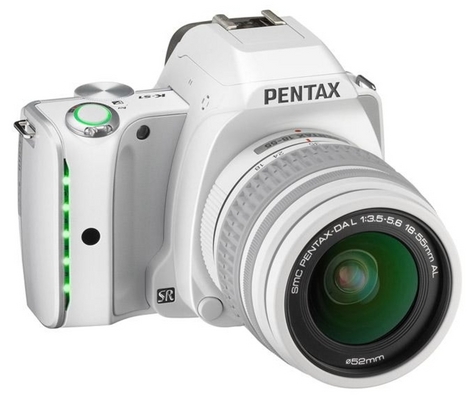 Ricoh Imaging has announced the PENTAX K-S1, a mid-level DSLR for customers "accustomed to a mobile interface" and built upon the solid footing set down by the more advanced K-3. There's a "newly designed" 20-megapixel image sensor capable of a 100-51200 ISO, 5.4 frames-per-second Burst Shooting, and a 1/6000 shutter speed. Add in some in-body shake reduction, and AA filter simulator, and even a 100% "filed of view glass pentaprism viewfinder.
Also new to the K-S1 is what the manufacturer calls the flat field user interface. Basically, menu and setting options are accessed not via the traditional dials and buttons, but by an integrated system that includes a back-lit LED selection dial (great for the dark), four-way navigation, and a 3-inch LCD display screen. Heck, even the power switch, model dial, grip are lit by LEDs.
While many 2014 cameras include built-in Wi-Fi, PENTAX has instead made the feature optional with the purchase of a "Flucard". Add one of those and the K-S1 will be able to transfer files over Wi-Fi, or turn your smartphones and tablets in wireless displays / remote control units.
PENTAX K-S1 Features
The PENTAX K-S1 will be available this September, 2014 for $749.95 (body only) to $799.95 (includes an 18-55mm kit lens). The three standard colors include Black, Blue, and White. In addition, colors available as part of the Fabric and Night Sky Collections include Cotton Beige, Linen Brown, Denim Blue, Tweed Gray, Sunset Orange, Dusk Gold, Moon Silver, Midnight Black, and Dawn Purple.
Additional Product Views