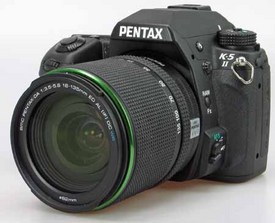 The Pentax K-5 II and K-5 IIs are aimed directly at serious photographers. These models are outfitted with a 16-megapixel CMOS image sensor, a rugged weather-resistant body, high light sensitivity (up to ISO 51200), and top shutter speed of 1/8000 second. The IIs is aimed at professionals who would prefer not to have the anti-aliasing filter, which smooths out fine details by decreasing high frequencies and distortion. I reviewed the K-5 II with the DA 18-135mm kit lens, which retails for $1,550.

The hefty K-5 II definitely feels like it could survive some serious knocks. The magnesium alloy and stainless steel body feels very rugged and weighs 26.1 ounces with the battery and SD memory card installed. The full-size hand grip is contoured to help you keep a firm and steady handle on the camera. Weather resistance is achieved through 77 protective seals, which make the camera operable down to 14 degrees F, or -10 degrees C. This full weather seal will help keep out moisture, sand, and dust, though dust is more likely to intrude during a lens swap and land on the sensor. To help with this, there's a helpful dust-removal feature whereby you take a picture to help locate dust, and can view that image on the LCD while cleaning the sensor.

Potentially, one of the greatest attractions of this camera is its ability to work with Pentax legacy lenses. The camera's KAF2 bayonet mount is billed to work with any Pentax lens, and the camera includes features to help the camera do so. For example, the ability to adjust the auto focus for a particular lens (called AF fine adjustment), and to store the autofocus fine-tune for up to 20 different lenses. Also, the camera has a feature called Catch-In Focus; this is designed for manual focus lenses - turning it on enables the camera to automatically trip the shutter when your focus is sharp.

The controls on the camera are plentiful and well designed. Switching to Live View mode is a breeze because its dedicated button falls conveniently under the thumb right beside the four-way control. The four-way control offers customary positions for changing the drive mode, white balance, and flash mode. The outlier is the rightward position, which launches the Custom Image function. You might consider this scene modes for pros (this camera has no scene modes). With settings like Portrait and Landscape, there is some analogy to scene modes, but many of the remainder are clearly aimed at serious photographers who know their color space and film developing methods, such as Bleach Bypass and Reversal Film.

There are digital filters as well. In shooting mode you get eight to choose from, such as Retro and Starburst. The custom filter allows you to adjust eight parameters, including high contrast and shading type. The edit selection of digital filters in playback mode is slightly different, and includes more artsy options like Sketch and Water Color. The camera also offers HDR mode for creating high dynamic range images in JPEG format.

Just above the Live View button sits and AF button and AF mode switch for quick settings changes. The two e-dials - one on the front and one on the back - make many settings adjustments a breeze. Plus, there's a customizable Green button on the back panel, and you can customize the RAW/Fx button on the body near the lens barrel. The dials can be customized, dependent upon shooting mode, and you can save a selection of 27 settings plus the entire Custom settings menu to the User position on the mode dial.

The focus mode switch beside the Live View button allows you to quickly change from AF single to continuous, or select manual focus. In the menus you select either 11-point or 5-point auto focus, and flip the switch surrounding the AF button to choose center-point AF or select AF, whereby you use the four-way buttons to select your focus point on an AF grid displayed on the LCD.

Pentax placed the playback and trash buttons at the top left of the back panel, next to the optical viewfinder, which gets them out of the way so during shooting everything falling under your right thumb relates to shooting or menus. On the top of the hand grip, behind the shutter button, sits dedicated exposure compensation and ISO buttons. The front e-dial is just below the shutter button.

When it comes to image quality, the K-5 II mostly delivers on the promise made by a 16-megapixel CMOS sensor. When I got the image I was aiming for, I was largely impressed. Details were crisp; colors and exposures were accurate. The exceptions mostly fell under two categories: auto exposure and Live View. The examples on the Samples page show the first - in some shots taken indoors at low ISO, the camera failed to adjust to capture a pleasing exposure. Outdoors too I ended up with some daylight shots taken in Auto mode that ended up with blurred action because the camera chose ISO 80 and a relatively slow shutter speed when everything was in shadow. A couple others, although exposed properly, lacked the fine details of other photos.

Viewed at 100% on a monitor the details looked a little pixilated (perhaps in part due to the anti-aliasing filter?) and fell short of the fine detail captured by my 8-megapixel Canon 20D. Abandoning full Auto mode and adjusting the ISO and shutter speed manually (as any serious photographer would do) delivered another comparative set of shots that proved the K-5 II's superior detail. In addition, I compared low-light shots taken in JPEG and RAW, and saw a clear difference. The JPEG files displayed a clear increase in noise that was even visible when fit to screen size. Viewing them at 100% showed a drastic increase in noise in the JPEG files versus the RAW images, beginning at ISO 1600. You can choose to shoot in one of two RAW formats: Pentax's own PEF or Adobe's DNG.

Of course, the camera offers a wealth of easily adjustable settings to get the look you want. The very high ISO 51200 setting allows you to get shots in dark settings without a flash you normally couldn't capture. But you have to pay the piper, so the saying goes. My indoor shots varied in noticeable digital noise, and it sometimes depended on subject matter. A shot including a lot of bare white wall suffered from a fair amount of digital noise at just ISO 400, both with and without flash (the flash shot was noisier). But a shot taken without flash of a busy arrangement of subjects under tungsten light in a red room looked great at ISO 3200, with little distracting noise. These were all taken with the Noise Reduction setting at Auto. You can turn this feature off or set it to low, medium, high, or custom. The custom setting lets you set the noise reduction level for each ISO.

Live View is a very convenient feature, but it has issues that aren't unique to Pentax or the K-5 II. The problem is that using Live View slows auto focus and thereby can result in more blurry shots - or missed shots - than when using the viewfinder. In my tests, using Live View increased the shutter lag from 0.6 second to roughly 1.8 seconds. Nonetheless, when your subject is static, using the 921,000-dot resolution LCD to frame shots can be fun and creative.

To help make Live View as functional as possible, there are three focus methods in the menus: face detection, contrast, and phase difference. It seems the general consensus is that contrast detection AF (which is used in point-and-shoot cameras) may be better for stationary subjects, and that phase detection is better for moving subjects. Contrast AF requires the light to hit the sensor, while SLR cameras use their mirror to bounce the light to the viewfinder and a phase detection AF sensor. So when an SLR lifts its mirror so you get a Live View of the sensor image, you wouldn't expect to be able to use phase detection AF. But the K-5 II makes this possible and lets you choose phase difference AF in Live View mode: You frame your shot using the LCD (with the mirror up), but when you actually press the shutter button halfway to focus, the LCD goes blank briefly because the mirror has folded down to bounce the light up to the phase detection AF sensor. You might say you get to have your cake and eat it too, but you just have to close your eyes when you take the bite.

The K-5 II can shoot at respectable burst speeds. The company bills its high burst mode as 7 fps, though my tests tallied 5 fps. There are two burst modes: Low shot at 2 fps, and high-speed burst clocked in at 5 fps in both JPEG and RAW formats. However, the camera has more stamina when shooting JPEGs. It could maintain 5 fps in JPEG format up to about 31 images, while in RAW mode it started slowing down at 25 images. All said, that's a long burst and a minor difference. If you need a longer burst, you can use low-speed burst and capture roughly 40 shots at 1.75 fps before it slows to 1.5 fps for the next 10 shots. After that, you can still record another 20 shots, limping along at 0.8 fps, but you'll still end up with a total of 70 JPEGs at the finish line. Using the built in flash, the K-5 II can snap 10 shots at 1 fps, then slows to roughly 0.8 fps for another 16 shots.

It's easy to whiz through images in playback mode. You use the front e-dial to scroll through pictures and the rear e-dial to magnify them. You set the default (initial) magnification in the menus, anywhere from 2X to 32X. Rather than take you through all thumbnail index page settings, turning the rear e-dial leftward takes you to an index view, then a folder view. Instead you use the Info button to pull up the multi-image display setting, and change it to either 4, 9, 16, 36, or 91 thumbnails.

There is not a dedicated movie button. Instead, you use the movie position on the mode dial to record up to full 1080p HD video. You can play it back in-camera on the high-resolution LCD, or via its HDMI port and an optional cable. I was impressed with the video quality, both its sharpness and the ability of the camera to adjust to changing lighting conditions (see our Samples page). The exposure adjustment wasn't exactly elegant, but it was quick enough to avoid missing the action, and the auto focus kept my moving subject in focus for the most part.

Serious shooters won't bother with the built-in flash, but in a pinch it might be useful within a 10-foot range. The small amount of light it casts tended to look harsh in my shots, but if you forget your external flash or don't have time to grab it, at least you also have incredibly high ISO at your fingertips.

Bottom line - The K-5 II is a serious piece of gear for serious photographers and pros, particularly those who have a large stash of Pentax lenses for their film cameras. The wealth of customizable button and dial options make quick settings changes an easy affair. The deep adjustments you can make to color settings and the easily launched Custom Image modes are very handy. The only questionable performance is in Auto mode exposures and JPEG processing - but who cares? If you're serious enough to buy this camera, you'll be shooting with manual settings in RAW mode anyway.