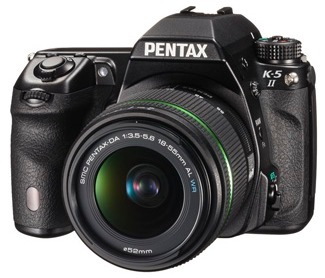 In late 2012, Pentax announced its 2012 flagship DSLR siblings, the K-5 II and K-5 IIs. Both camera models feature a 16.28-megapixel CMOS image sensor, a 3.0-inch LCD display, Pentax's PRIME II imagine engine, a newly designed Autofocus sensor for more accurate performance with faster lenses, a 1/8000 per second top shutter speed, 7 frames-per-second high-speed burst shooting, 9 image modes and 18 built-in digital filters. Both cameras are also weatherproof and dustproof, thanks to 77 special body seals; which also allow the camera to be good for reliable operation down to 14°F (-10°C).
Other built-in gadgetry includes their SR (shake reduction) mechanism to prevent camera shake from blurring photos and video recording (no matter what lens you are using), a dust reduction (DR II) mechanism to keep that CMOS sensor particle-free, an electronic level, and an extremely long batter life (approx 980 shots per full charge).
So what's difference between the K-5 II and the K-5 IIs you ask?
The IIs will cost about $100 more (body only) than the II because the IIs "is offered without an anti-aliasing filter, which is commonly found in many DSLRs to smooth computer generated imagery by decreasing high frequencies and distortion, but adversely reduces detail resolution. Without this filter, the K-5 IIs creates deeply rich, detailed imagery at supreme resolution levels." Pentax says this is better for professional photographers who typically shoot indoors and have greater control over lighting conditions.
Pentax K-5 II Features
Pentax K-5 IIs Features
The Pentax K-5 II will be available this October (2012) in three forms. The body-only version will retails for $1,199.95, while the the DA 18-55mm kit and the DA 18-135mm kits will set you back $1,349.95 and $1,549.95, respectively. The Pentax K-5 IIs is available in a body-only package, for $1,299.95. See our Lowest Price button at the top right of this page for the more current online pricing.