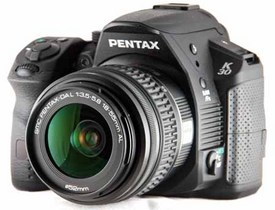 The Pentax K-30 feels good in the hand. Its handgrip is deep yet not wide, and allows you to get a firm grasp on the body while still being able to move your right thumb over a variety of buttons on the back panel. Included in the controls are two dials - one on the back that falls conveniently under the thumb, and a second on the front of the handgrip just below the shutter button. This variety of controls - including a programmable green button next to the shutter button and a customizable RAW file format button near the lens barrel - makes it easy to dive in and out of menus, and offers quite a few customizable options to suit your shooting style.

The camera sports live preview mode, so you can frame your shots using the LCD. The 921,000-dot resolution offers very crisp details and attractive colors, and in most situations offers a great alternative to the optical viewfinder for taking photos. I didn't always find it a perfect option in bright sunlight. And, once you get addicted to the convenience of framing shots with an LCD, you'll likely wish that the screen was on a hinge and could be angled outward so you could get creative with your angles. On the other hand, the K-30 boasts a weatherproof body and a hinging LCD may offer too great a weakness for a weather seal to overcome.

When using the LCD with autofocus, you can use the rear dial to magnify the image so you can inspect an up-close detail of your shot and check the focus. You can also set the camera to automatically magnify the image, and then adjust the magnification with the rear dial from 2X to 6X. To launch this feature with autofocus, you press the OK button on the four-way control. To help you further, the camera offers focus peaking, which highlights the edges of objects. In combination with the magnification, this feature helps make manual focus with live view and the LCD a usable combination.

In my testing, shutter lag when the camera had to focus was a brisk 0.3 seconds when using the viewfinder (and thus phase detection AF), while using the LCD live view slowed it down to approximately 0.8 seconds (using contrast detection AF). This was done while photographing a stationary subject in indoor light, and only applies to the first image (burst mode proceeded at a quick clip regardless of focus method after focus locked on). I also noticed some slight focusing sluggishness when using live view to photograph walking geese and flower close-ups in the shade. I was shooting in Program mode, and with live view the auto focus is set to single shot, not continuous, which was one culprit. One obvious remedy is to change the default autofocus method with live view from face detection to tracking, select or spot. But this requires a trip to the menus, as opposed to quickly changing the AF mode with the dedicated AF switch near the lens barrel; which only applies to shooting with the viewfinder. This switch allows you to select one of three positions: AF.S, C and MF. The AF.S position can function as AF auto, with the camera deciding whether to use single-shot or continuous AF. Some scene modes default to one or the other.

When using the viewfinder, you get more AF options. In addition to the AF switch, in the menus you can select from 11-point AF, 5-point AF, a user-selection from 11 points, and spot (at the center of the frame). Again, you have to make a trip to the menus to change the mode, but once in select mode, you can use the four-way control to move your AF point, with the 11-point graph displayed on the LCD. Also, you can use release-priority, which allows you to trip the shutter even if the subject is not in focus (not the default). In continuous shooting mode, release-priority maintains the shooting speed even if autofocus hasn't locked onto the subject.

High ISO performance is impressive. In my test shots the K-30 performed well even at ISO 3200. You can shoot at up to ISO 12800, though the noise becomes a bit too obstructive on fine details beginning at ISO 6400, in my opinion, when using NR Auto (the default). Even at the highest ISO settings, however, the shots are certainly usable, and you can choose from three levels of noise reduction: low, medium, and high. From my test shots, it appeared that the camera was applying medium noise reduction to shots taken at the highest ISO settings. Shots with low NR looked noticeably noisier, and those with high NR had a more smeared look on fine lines and details.

Image quality is impressive. The 16-megapixel CMOS sensor captures sharp, accurate exposures. And the high performance in low light gives you a lot of flexibility - I was able to capture good-looking handheld shots indoors at ISO 1600 and ISO 3200, without flash.

Switching to RAW mode is easy - there's a dedicated button on the camera body for this purpose. You can choose to shoot in RAW or RAW+JPEG, which captures simultaneously a JPEG file and a RAW image. By default this is for one shot, but you can choose to keep the setting change until the button is pressed again. The One Push File Format button also can be programmed to launch exposure bracketing, optical preview, digital preview, composition adjustment, or AF active area (for moving your AF point). I'm unsure of the usefulness of this last function - if you are in select AF you can already use the four-way control to move the AF point. I was hoping that pressing the button would change the AF mode from any other AF mode to AF select, but that is not the case - you still must go into the menus to change the AF mode.

As for speed, the K-30 does not disappoint. It can shoot at 5 frames per second, regardless of whether you are shooting in JPEG or RAW. The difference is that when shooting RAW files, the fast burst has a limit of roughly 9 shots before the time between shutter trips slows from 0.2 seconds to about 0.8 seconds. There's a limit of roughly 30 JPEG images at 6fps. The camera also offers a low-speed burst that shoots in JPEG and RAW at roughly 3.3 frames per second. In low-speed, I was able to get off 11 shots in RAW before the camera slowed from progressively from 0.3 seconds to, eventually, more than three seconds. In low-speed burst, there is no limit to the number of JPEG images you can record; other than memory card space of course.

For help with high contrast shots, the camera offers HDR (high dynamic range) shooting, which lets you choose the bracketing of your shots by one, two, or three EV stops. You get a selection of 11 custom image settings and seven digital filters when shooting; when editing in-camera you get a total of 12 digital filters. The scene mode selection is ample, offering you 19 options.

Navigating the K-30 in playback mode is just as brisk as when shooting. The rear dial magnifies images while the front dial lets you whiz through your pictures. You get five options for how much information you want displayed with your images, and the rear dial takes you to an indexed view when you zoom out (turning left). My only complaint is that turning it further does not increase the number of thumbnails displayed: you choose in the menus whether to have indexed view display 4, 9, 16, 36, or 81 images. You cannot change the number of thumbnails displayed on-the-fly. On the plus side, if you are using the RGB or RGB histogram view, you can toggle between the two displays by pressing down on the four-way control. There is also a calendar filmstrip display, which allows you to scroll through photos by date and simultaneously view four additional photos taken on that date.

You can shoot HD video but not play it in high-definition from the camera. The camera records full 1080P HD video, but it has only one port - a combination mini USB/AV port for playing it on a TV. You can make minor edits to your video in the camera; in movie edit mode you can cut a video file into separate segments. The K-30 records high-quality video, though in low light the video suffers from distracting graininess. Autofocus can be a little slow to adjust to moving subjects or zooming; and though you can use manual focus, this might be best only when using the viewfinder. That's because when shooting movies using live view, the LCD only displays focus peaking before you start shooting. Once video recording begins, the edge highlights disappear.

Being a digital SLR, of course, the camera has a hot shoe for attaching one of four optional external flashes. But the built-in pop-up flash is no dog; it has a usable range of roughly 2.3 to 16.4 feet. In my shots I found that it did an adequate job within this range, and threw around a lot of light for a small built-in flash.

Perhaps the most heavily promoted feature of this camera is one we are not exactly encouraged to test - its weatherproof design. The reinforced poly carbonate body over stainless steel chassis is rated to operate at temperatures as cold as 14°F, and as hot as 104°F. If you're out to capture adventures in the rugged outdoors, this design is a definite plus, especially since it offers weatherproof specifications; so getting caught in a rain or snow storm is no worry; as long as you are also using a weatherproof rated lens. And, if you're doing that, you're likely to be interested in the optional GPS unit, whose data is available in the camera via detailed information display, along with photographer name and copyright information. You can also get a wireless remote, though there's one odd caveat: Auto focus does not work by default with the wireless remote - you have to change the setting.

Another definite plus is that this camera can run on AA batteries. The battery compartment holds four AA batteries when outfitted with an optional battery holder. This is a great convenience when caught in a bind, or you simply do not want to buy a second rechargeable lithium-ion battery. This design, however, does have one obvious drawback: To accommodate the AA batteries, it appears the shape of the battery compartment has limited the size of the Li-ion battery, and thus affected its capacity. The Li-ion battery is rated to last just 410 shots (CIPA-rated, 50% with flash). However, if you get the optional holder and insert four AA lithium batteries, the camera is rated to last approximately 1,000 shots (CIPA-rated, 50% with flash).

Bottom line - The K-30 is fast, full-featured, and fun to operate. It delivers high image quality, records HD video, and is sturdy and weatherproof. Even if you're not the outdoorsy type, the flexibility for fast adjustments offered by the programmable buttons and two well-placed dials make the K-30 a serious contender. If a few autofocus quirks don't throw you, this dSLR will likely thrill you.