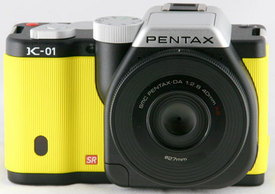 The most obvious draw of the K-01 is the K-mount, which can accept numerous lenses going back long before digital cameras came on the scene. If you are a long-time Pentax user with a big stash of K-mount lenses, the K-01 is likely a godsend. But for those of you looking for a compact backup to your SLR, or simply attracted to the concept of a mirrorless camera, the K-01 presents a number of alluring features and some equally questionable traits.

The image quality of the K-01 is top-notch. Shooting at 16 megapixels, the camera produces very sharp and attractive images. The 11 custom image adjustment options and 19 digital filters offer high-quality adjustments that deliver attractive results. You get a CMOS sensor and sensor-shift shake reduction and dust elimination, and a shutter speed range of 1/4000 to 30 seconds; along with bulb mode and silent shutter action. And, to expand the detail in shadow and highlight areas, you get a high dynamic range (HDR) mode with its own position on the shooting mode dial.

You'll likely be impressed with the built-in flash. For its small size, it throws out a lot of light. I found it capable to acceptably illuminating objects 20 feet away in a dimly lit room.

All of these features, plus 1080p video recording, make the K-01 sound very attractive. How alluring these features are in the end, however, will depend on how you shoot. If your style requires fast performance or often involves difficult subject matter, you may hit a wall with the K-01.

The first potential deterrent of any mirrorless camera is the lack of an optical viewfinder. This leaves you to use either the LCD or an electronic viewfinder (if there is one) to frame your shots. Pentax has taken an ingenious step forward with its focus peaking mode, which helps you get your subject in focus by highlighting the edges of objects to indicate they're in focus. However, even when viewing an image preview on the K-01's beautiful high-resolution 3-inch LCD (921,000 dots), I still found it difficult to trust; highlighted edges and all.

To help you further, you can set the preview to magnify automatically (roughly one second after auto focus has locked onto your subject), or press the OK button to blow up the image to 2X, 4X or 6X.

Though the LCD's resolution is top-shelf when viewing photos, you don't get the same ultra-crisp details with the live view, which makes focus peak essential because you can't trust your naked eye. And, unfortunately, the K-01 does not offer an electronic viewfinder as an option. I would have traded for the optical viewfinder on my 30-year-old manual film SLR.

One little LCD caveat I run up against: If you wear polarized sunglasses, using an LCD as a viewfinder will be troublesome on sunny days. In the shade, turning the camera vertically dimmed the display significantly, though it was still usable for framing a shot; in the bright sun, however, the LCD darkened almost entirely, requiring me to remove my polarized sunglasses (which happen to be prescription).

Unfortunately, the live view magnification feature is not available when using manual focus, which is disappointing. That's arguably when you need it most. As is, you're left to focus manually with the image on the LCD at 1X; you still get help from the flashing edges of the focus peaking feature if you have that turned on, but I found this more difficult to discern than, say, a blinking spot AF box accompanied by a beep to indicate sharp focus. In afternoon sunlight, this is particularly frustrating.

The K-01 uses contrast detection autofocus, which can be somewhat slow. Occasionally it had trouble locking onto my subject, swimming in an out as it did. In overestimating its focus speed, I ended up with quite a few out-of-focus shots, which was disappointing, including those of a moderately agile two-year-old. You get four autofocus options - face detection, tracking, multi-spot, and spot - which gives you a good amount of flexibility. The spot AF box can be easily moved with the four-way control buttons, and enlarged or shrunk using the thumb dial.

When the autofocus or burst speeds weren't being taxed, I was very pleased with the K-01. The image quality of my landscape shots in particular were extremely sharp and colorful. Adding one of the custom image options or digital filters enhanced the fun, and I mostly liked the results. Shooting close-ups of small objects with the 40mm wasn't ideal, as one would expect. But even when using a macro lens on the K-01, I suspect the frustration would be the same - trying to get the focus to lock on at just the right spot. I found myself taking many frames of, say, the same flower because the success of the autofocus, even when using the focus peak feature, was too hit-and-miss. Having to magnify every image on the LCD to ensure I got a sharp shot got tedious.

The K-01 makes a potentially bold stylistic statement, having been given its looks by well-known designer Marc Newson. Whether you like the getup or not is personal preference, but what's important to know is that the camera is not particularly small for a mirrorless model. Two of its competitors, the Nikon 1 J1 and Sony Nex-5, are significantly thinner and lighter.

One definite plus is that the K-01 could definitely take some knocks. The aluminum body feels very sturdy and is shaped like a brick. But that brick-like shape lacks an SLR-style handgrip, which is something I'd prefer to boost my confidence I wouldn't drop the camera. The thickness of the body is apparently necessary for the camera to accommodate the breadth of K-mount lenses out there - and there again lies the K-01 tradeoff: All of those lens options, but mounted on a camera that doesn't quite perform like an SLR.

On the back panel there are four buttons and a four-way controller, which for the most part work very well for navigating the menus, with the help of the thumb dial at the top. In particular, in shooting mode, the Info button launches the most commonly used settings as 14 icons - you use the thumb dial to change each setting without having to enter a menu and scroll via the four-way controller. However, you do have to use the four-way controller to scroll through thumbnails; you can't whiz through them using the thumb dial - turning it right magnifies an image up to 16X, and leftward takes you to index view. You also cannot change on the fly the number of thumbnail images displayed in index view; you have to make this setting change in the Info menu. Index view displays 4, 9, 16, 36, or 81 images at a time.

You can group them by folder or use the handy calendar filmstrip display option, in which you use up/down navigation to scroll by date, and left/right navigation to scroll through your shots.
The top panel has two programmable buttons on either size of the zoom dial, which offers a lot of flexibility. You can program the green button to change the file format, launch preview, turn on the focus peaking, pull up the custom image selections, or bring up the digital filter menu.

By default the red button serves as a dedicated movie recording button, though you can program it to perform any of the previously mentioned functions. If you program it for another function, you simply turn the mode dial to movie mode and press the shutter button to begin video recording. The HD quality of the K-01's video looks great, but video recording with this camera is limited by its autofocus - it only works initially. Thereafter, you have to manually focus to keep a moving subject from becoming a blur.

The K-01 is not particularly fast out of the gate. Even when shooting in high-speed burst mode, it only shoots at 3fps for the first three frames. Thereafter, it slows down to just 1fps, which makes it a poor fit for sports photography. Reducing the JPEG image size from 16 megapixels to 5 megapixels doesn't really help, resulting in 1.6fps. When shooting RAW files, only low-speed burst mode is an option, which the camera performs at about 0.6fps.

The manual touts that speeds up to 6fps can be reached in high continuous shooting mode, but I was unable to get anywhere close to that in my tests, even when reducing the JPEG resolution to 5 megapixels. The camera wasn't particularly fast off the line, either, with a lag of 0.4 seconds (2.5fps) between the first few images. Then it quickly slowed to about 1 second between shots, or 1fps. Trying to skirt this issue, I switched to manual focus, but achieved the same result.

For a mirrorless camera, the K-01 has great stamina. It's rated to fire 500 shots before crapping out, which is very impressive for a mirrorless model and puts it in the low end of the DSLR range. By comparison, the Nikon J1 is rated to last 230 shots and the Sony NEX-5N to capture 330 frames before running out of juice.

Bottom line - The Pentax K-01 is a great opportunity to give your stash of K-mount lenses a second life, or add the ability to mount them on your SLR backup. The high image quality is impressive, as is the ability to crank up the ISO to 25,600. Looking at photos at high magnification on the 921,000-dot LCD is a pleasure - but the lack of an electronic viewfinder option, sluggish autofocus performance and slow burst modes make it a ho-hum performer in a variety of shooting situations.