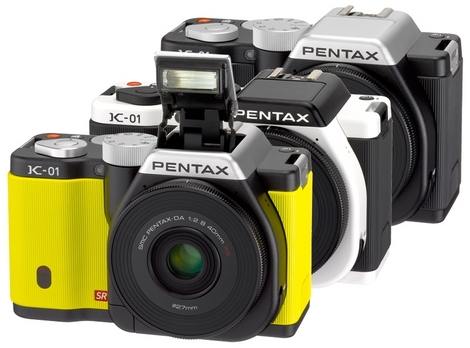 For 2012, PENTAX RICOH IMAGING has announced the K-01, the first backward compatible mirrorless camera to use existing dSLR mount lenses without any adapters, which was designed by one of the world's most acclaimed an influential designers, Marc Newson. Before laying his hands on this camera, Newson designed bicycles, cars, aircraft, yachts, and had his collected works shown at The Museum of Modern Art in New York City. The idea here was to create a beautiful camera that just so happens to capture world class images.

At the heart of this is a 16-megapixel APS-C sized CMOS image sensor with settings for Low Noise image capture as well as the ability for users to choose between multiple aspect ration. As an interchangeable lens camera (ILC), the K-01 will work with any K-mount lenses, which is great news considering PENTAX has made over 25 million of them. And don't worry about swapping out lenses; the K-01 has a sensor-shift Dust Reduction System to prevent dirt buildup. And, when you're shooting, that same sensor-shift system also helps with camera shake during still and video recording Another nice feature is Focus Peak Mode, which "provides fast and accurate manual focusing."


PENTAX K-01 Features:
The PENTAX K-01 is made with durable machined-aluminum and is available in black, white, or yellow. The K-01 is sold as a body-only kit with a MSRP of $749.95 USD or as a lens kit version -- which includes the pictured DA 40mm XS lens, the world's thinnest interchangeable lens -- for $899.95 USD. The lens can also be purchased separately for $249.95. See our buy box below for the most current online pricing.