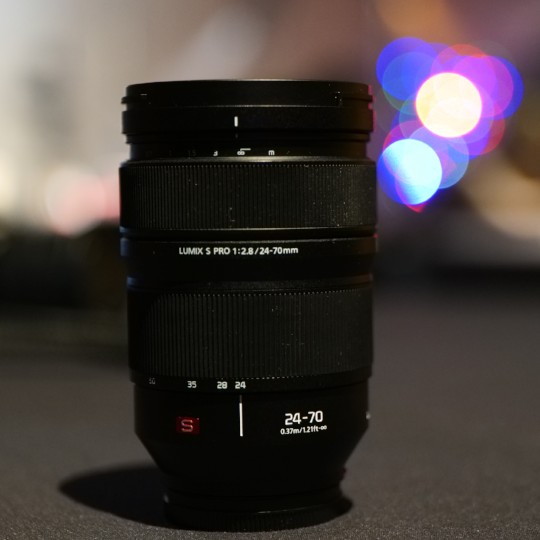 Panasonic has announced their first 24-70mm F/2.8 L-Mount zoom lens for their new full-frame mirrorless camera systems. With a constant F/2.8 max aperture across the zoom range, this standard zoom lens is weather-sealed for dust, splash, and freezeproof operation (down to -14°F). It boasts a double focus zoom system -- both a linear motor and a stepping motor -- for fast and quiet autofocusing. And there's even a manual clutch for quick and ergonomic manual focusing.

Click on any image in this article to see/download the original .jpg file!

We recently attended the Panasonic S1H launch event in Hollywood, CA where we got to play with the 24-70mm F/2.8 for about an hour. Here are our first impressions.

If you've ever used one of Olympus or Panasonic's Micro Four Thirds PRO-series lenses, you'll be right at home with the new Panasonic Lumix S PRO 24-70mm F/2.8. Yes, this wasn't a final production model, but it felt and looked like one. The metal and rubber surfaces felt rugged; there were no odd rattles or squeaks. We were unable to test our sample lens in any weather, but based on my experience with Panasonic lenses, my expectations for this one are quite high.

In short, this lens looks and feels as rugged as Panasonic claims.

The Panasonic Lumix S PRO 24-70mm F/2.8 feels hefty but not heavy and perfectly balanced in the hand when mated to the S1H. The S1H, for context, is a little heavier than its S1 and S1R siblings thanks to extra cooling and a slightly different vari-angle LCD display. They are all sizeable mirrorless cameras, especially compared to most Sony models, but they have wonderful ergonomics overall.

In short, the S1H (and S1 and S1R) feel great in the hand and it's a pleasure to use them for extended periods. Add in the new 24-70mm F/2.8 and, even though I don't shoot with Panasonic as often as I do other brands, I felt right at home with this lens. The zoom ring is located closer to the body and turns smoothly without suffering any zoom creep.

The focus ring is similarly smooth with the added, satisfying click of the manual focus clutch when one pops between AF and MF modes. For those less familiar with Panasonic and Olympus lenses, there's usually a moment early on when one accidentally leaves the lens in manual focus mode and can't figure out why the camera won't focus. But once it becomes part of your workflow, I personally prefer MF clutches to AF-MF toggle switches because they're easier to engage on the fly.

There are no other buttons on the lens barrel. It's pretty simple stuff.

While the point of the Hollywood event was to test out the video-heavy S1H body, I spent most of my time with this camera and 24-70mm F/2.8 lens combo shooting still images because that's mainly what we focus on here at Steve's Digicams. Still, I was able to test this lens' AF performance for both stills and video, where I was generally impressed.

First, let's talk about still photography. Despite being designed for videos -- it adds an optical low-pass filter to reduce moire where the S1 removes it for sharpness -- the S1H takes lovely images. I was able to test the 24-70mm F/2.8 in bright, mid-day Southern California Sunlight as well as under studio lighting and near-dark interior conditions. In all three scenarios, the lens focused quickly and accurately and I was also able to move the focus point around easily. In short, these are the types of speeds one comes to expect from a professional landscape and portrait lens, and the Lumix S PRO 24-70mm F/2.8 doesn't disappoint.

In video recording, I was less impressed, but I don't fault the lens. Panasonic continues to implement DFD (Depth From Defocus) contrast-based AF system and, though it's quite accurate, it feels slow compared to Sony's AF system, especially when shooting in darker scenarios. There's also a lot of hunting, as we've come to expect. That being said, outside of one-person crews and vloggers, almost all of the pro videographers who attended this event were shooting manual focus because that's the way professional filmmakers work.

In short, the Lumix S PRO 24-70mm F/2.8 is very quick to AF for still photographers, but its video limitations felt more like body issues than lens issues to me.

While we've been unable to open, edit, and play around with the .RW2 RAW files we captured during our event, I'm quite taken with the images this lens captures.

At 24mm, I see no barrel distortion of signs of vignetting when shooting close to a flat concrete wall. On the outer edges, I wouldn't call the results tack sharp, but this is a fairly low-resolution camera with an OLPF so the results might be imperfect regardless. Still, it's a very clean wide-angle image. At 70mm, the results are a little more impressive. No distortion or vignetting creeps up, and the images are indeed edge-to-edge sharp. I didn't encounter any fringing with the lens, either.

During our testing, I jumped between Panasonic's Standard picture profile and a couple of different Black & White monochrome options. This lens, in color, accurately renders light blue skies, red sign lettering, and green foliage on. I would have like to see a touch more contrast, but, I suspect, with the RAW files in hand, it wouldn't be hard to manipulate these images.

Panasonic's in-camera black & white modes are slightly addictive, allowing shooters to shoot a variety of flat or high-contrast images. Paired with the Lumix S PRO 24-70mm F/2.8, I could have shot black & white around Hollywood streets all day long if they would have let me.

As we'd expect from an 11-bladed aperture, the Lumix S PRO 24-70mm F/2.8 yields excellent bokeh. If you're shooting with lights in the background, you can expect lovely, circular orbs that turn slightly (American) football-esque as you near your subject and the lens' minimum object distance. What impresses me most about this lens' bokeh is the way it almost mimics and F1.8 prime lens in its smoothness and the way the orbs appear. I also enjoy the way this lens' sharpness rolls into smoothness along z-axis leading lines.

The Panasonic Lumix S PRO 24-70mm F/2.8 may be pricey, but that's what we come to expect in weather-sealed professional-caliber standard zoom lenses. Elegantly ergonomic, this lens produces sharp images, yields buttery-smooth bokeh, and suffers from minimal distortion and aberrations (I didn't see any, but my experimentation was far from exhaustive). And this is when paired with the video-focused S1H camera body.

If the final version is as good as our pre-production unit on this specific camera body, I can only imagine how great this would be paired to Panasonic's S1 and S1R mirrorless bodies. If you're a pro or enthusiasts shooting with Panasonic's full-frame cameras, do yourself a favor and check this lens out next month.

Click HERE to pre-order your copy today from B&H Photo-Video!