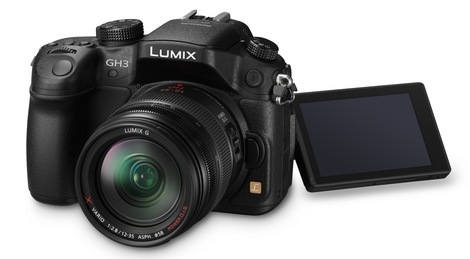 Panasonic's Digital Single Lens Mirrorless LUMIX DMC-GH3 picks up where the GH2 left off. This year's flagship Micro Four Thirds camera has an all new 16-megapixel Live MOS sensor and is designed to compete in the DSLR marketplace for the attention of professional photographers and video enthusiasts.
With an magnesium alloy full diecast frame, the GH3 is splash and dust proof, which is pretty impressive given its 3.0-inch OLED free-angle touch screen display. The new GUI (graphic user interface) makes operation and menu navigation simple. In addition to changing settings, you can also "AF Touch" rack-focus on the fly while shooting stills or video.
Panasonic's Venus Engine image processor helps the camera achieve an ISO range of 100 - 12,800 with high-speed burst shooting at 6 frames per second (good for a maximum of 18 shoots in RAW+JPEG and up to 80 shots in full resolution JPEG). The camera also boasts a full range of manual controls as well as a few creative image modes to match any shooting condition and/or desired stylization. For example, Photo Style allows users to choose one of six color types while customizing contrast, sharpness, saturation and noise reduction. Further, Creative Control includes 14 filters: Expressive, Retro, High Key, Low Key, Sepia, Dynamic Monochrome, Impressive Art, High Dynamic, Cross Process, Toy Effect, Miniature Effect, Soft Focus, Star Filter and One Point Color.
If video is your hobby (or profession), the GH3 has a lot going for it. You're shooting Full HD 1080p in 24, 30 or 60 frames per second. And, unlike the previous model which limited to AVCHD encoding, the GH3 adds MP4 and MOV file formats as well as uncompressed video output (All-Intra @ 72 Mbps; IPB @ 50 Mbps).
Like many consumer-level point-and-shoots, the DMC-GH3 includes built-in GPS and WiFi functionality. Thanks to LUMIX CLUB Cloud Sync, you can archive stills and HD video with the touch of a button, or indirectly upload files to Facebook, Flicker, Picasa, Twitter, or YouTube. We're talking full resolution stills (including RAW) and HD video too. There is also a free LUMIX LINK app for Android and iOS, which turns your smartphones and tablets into remote controls, back up storage, or even external video monitors. Heck, if you have the right gear on your home network, you can even stream photos to DLNA-compliant devises (like Panasonic VIERA HDTVs)
Panasonic LUMIX DMC-GH3 Features
Optional Features
Exact pricing and availability are not yet available, but expect the Panasonic LUMIX DMC-GH3 to cost just under $2,000 and be out before the year's end.
Additional Product Views