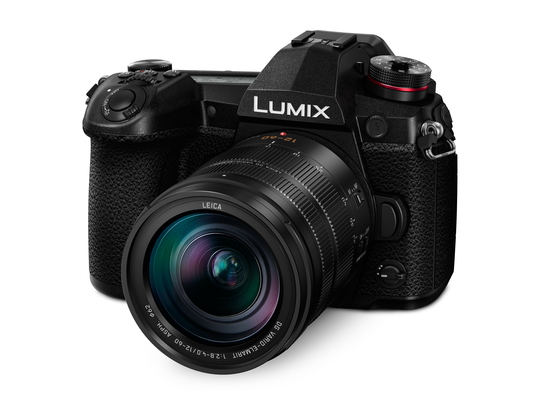 UPDATE: Pre-order the Panasonic G9 from Amazon here: http://bit.ly/PanasonicG9
Where the Panasonic GH5 is a video-first DSLM (Digital Single Lens Mirrorless) camera that can also shoot good still images in a pinch, Panasonic has unveiled the Lumix G9, a flagship still-focused sister model that can also shoot good video in a pinch.
Overall, the G9 is lighter, more compact, and set to cost about $300 LESS than the GH5, even though it offers many of the same parts and specifications as the GH5. Most notably, Panasonic has made a lot of changes to the image sensor and image processor, which results in a blazingly fast camera Panasonic claims "achieves the highest image quality in the history of all LUMIX G Digital Single Lens Mirrorless cameras."
Here's what else went into the sensor and processor:
"The 20.3-megapixel Digital Live MOS Sensor without low-pass filter drives the maximum performance of the lens and the Venus Engine 10 rendering high-precision yet natural images with its Multipixel Luminance Generation and Intelligent Detail Processing. An optimum gradation setting according to the characteristics of the sensor provides a wider dynamic range for smoother gradation. Plus, an AR coating on the sensor minimizes ghosts and flaring even in backlighting. A Tuned Three-dimensional Color Control detects not only hue and saturation but also brightness, and applies optimal control according to the value of each factor. This achieves rich color reproduction from dark to bright parts of the image, which especially improves the expression of skies or human skin. A Tuned High Precision Multi Process NR boasts high noise identification accuracy and preserves details even after the noise reduction process, which results in natural textures and precise detail especially in middle to high sensitivity image recording."
The G9 is the latest camera to include a High Resolution mode, but unlike the 4-shot Olympus OM-D E-M1 Mark II and Sony A7R III high res modes, the G9 combines "consecutively shot images while shifting the sensor", which results in an 80MP equivalent (10368 x 7776) image. RAW or .JPEG, up to you.
The G9 also features the same 5-axis in-body image stabilization as the GH5, but it's been tuned with a new algorithm to give you up to 6.5 stops of exposure compensation with our without Panasonic's Dual I.S. 2.0 compatible lenses. (Basically, the camera body alone will give you up to 6.5 stops on 180mm or wider equivalent lenses, while Dual I.S. 2.0 lenses extend that 6.5 stop capability to 280mm equivalent glass).
The 5-axis I.S. also comes in hand for 4K video recording. Like the GH5, the G9 shoots up to 4K/60p and up to Full HD 1080p at 180fps. However, unlike the GH5, you're not getting 10bit video, V-Log, or HLG HDR capabilities.
AutoFocus remains a similar Contrast AF + up to 225-point DFD (Depth From Defocus) points, but it's been improved again to "achieves the world's fastest AF speed of 0.04 sec*
In terms of displays, the G9 boasts the same blackout-free OLED Live View Finder (LVF) and 3.0" Free-angle Rear LCD Monitor (1040k dot) as the GH5, but adds a Status LCD onto the top right of the body (where the mode dial is on the GH5) so you can see all of your settings without looking through a viewfinder. The LVF also has a Night Mode, which removes the blue color from the on-screen image to help reduce eye strain (photos are not affected). There's also a joystick and dual UHS-II rated SD card slots as well as a full-sized HDMI output and a USB 3.0 Type B port, which can be used for powering the camera remotely.
Battery life is an average 380 shots in normal mode or a DSLR-esque 920 shots in the power-saving mode. Like every modern camera, Bluetooth and Wi-Fi are a must to allow for smartphone remote controlling, tethering, and/or to transfer image files for instant-Instagraming.
KEY FEATURES
PRICING & AVAILABILITY
The Panasonic G9 (aka the Lumix DMC-G9) will be available in January 2018 for $1,699.99. Pre-order NOW from Amazon.com! http://bit.ly/PanasonicG9