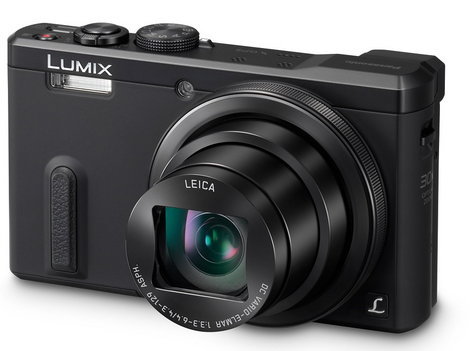 Just in time for CES 2014, Panasonic has released four new Lumix digital cameras. The DMC-ZS40 is a "Premium ... Compact Camera", which boasts some appealing specifications stuffed inside its petite shell. These include a 30x "Ultra" zoom lens, which covers a 35mm equivalent zoom range of 24-720mm. To help keep things steady with all that zoom, they've included their proven HYBRID O.I.S.+ image stabilization system.

Like most all of your 2014 compact cameras, the ZS40 incorporates built-in Wi-Fi and NFC technology, allowing you to instantly share photos and video with friends and family on Facebook and other social media sites. All that's needed is an Android or iOS smart device, and the free Panasonic Image Mobile app. This app also allows for remote operation from your smartphone or tablet, using the screen as a viewfinder and offering onscreen buttons to capture still images or video. The ZS40 also sports built-in GPS functionality, including GLONASS (Global Navigation Satellite System) compliance, which they claim affords, "higher accuracy".

Getting to the core specs, the ZS40 employs an 18.1-megapixel HS MOS image sensor that is coupled with their powerful Venus Engine processor. This combo allows you to capture high-resolution still photos at up to 10fps, along with full 1080/60p HD video.

As you'd expect, the ZS40 is loaded with easy to use exposure options for beginners, including iA (intelligent Auto), HDR (High Dynamic Range), and various other automatic scene modes. They didn't forget more advanced users either, with the PASM modes and a nice eye-level LVF (Live View Finder).

Pricing will be in the neighborhood of $449.95 US, and availability will be in mid April, 2014. It looks as though it will be available in all black, or black and silver trim.