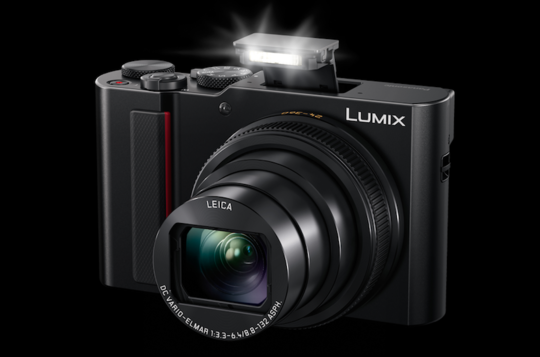 When the Panasonic LUMIX DMC-ZS100 came out nearly two years ago, it helped define the travel zoom camera. Technically, it's still a point-and-shoot, but it has a fixed zoom lens that produces images you previously could only get from an ILC or DLSR lens.
The new ZS200 just might set the standard again for truly tiny and affordable travel zooms. People are starting to come back to small digital cameras after years of abandonment for smartphones. There's an advantage to a camera like the ZS200. Its 1-inch MOS sensor might be smaller than Micro Four Thirds, APS-C, or Full Frame sensors, but it's way bigger than a cell phone sensor. When combined with Panasonic's new Venus engine, he ZS200 can capture images up to an ISO of 12,800, making it a travel camera that's perfect for day or night shoots.
What really separates this camera from other travel zooms or point-and-shoots is its amazing 24mm ultra-wide angle LEICA DC VARIO-ELMAR lens. Leica is known for their glass and when you combine their technology with Panasonic's 15x optical zoom, you now get a lens that is the 35mm camera equivalent of a 24-360mm zoom lens. This allows you to not only crush the background and grab Kurosawa-level telephoto shots, but fully wide this lens becomes a macro capable of taking in-focus images from 3cm away! If that was a traditional Canon DLSR lens it would probably be three feet long. But it's not.
Like the new GX9, the ZS200 is getting a 5-Axis Hybrid Optical Image Stabilizer to completely eliminate blurry pictures and shaky home movies, which you can capture in 4K at up to 30p. And. also like the GX9, it's getting Panasonic's L Monochrome mode to capture inky black and white images that look like they came from an old roll of tri-x. It also has the same Contrast autofocus system with DFD (depth from defocus) technology which can allow the camera to focus at lightning fast speeds, like .1 second fast (although contrast AF systems aren't as good as phase detection systems). The ZS200 also has the same 4K Photo burst shooting mode at up to 30fps. Oh, and it has a new LVF that's the biggest and brightest in its class.
I'm telling you the only thing keeping people from buying travel zooms like the ZS200 in the past few years was connectivity. Your phone makes it so easy to snap a picture and share. But this camera has both Wi-Fi and Bluetooth 4.2 allowing you to easily control your camera remotely or upload photos right to your phone so you can share them on social media. The technology barrier between devices is dropping and it's no longer a complicated mess. Take what you want now and upload the rest to edit later. This just might be the perfect vacation camera indeed.
KEY FEATURES
PRICING & AVAILABILITY
The LUMIX ZS200 will be available to purchase in either Black or Silver on March 20, 2018, with a suggested retail price of $799.99.