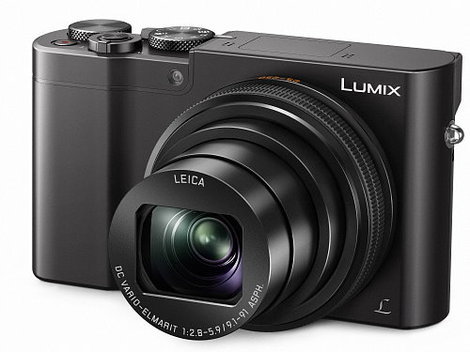 The second new ZS series camera for 2016 from Panasonic, the Lumix DMC-ZS100 is a powerful new compact camera that is packed with features photo enthusiasts will appreciate. While being compact, the ZS100 packs a punch with a 1-inch MOS image sensor that offers 20-megapixels of resolution, along with the ability to record UHD 4K video at 30fps (.mp4 format). Like past Lumix models, the new ZS100 also offers Panasonic's 4K Photo function, which allows users to extract high-quality, 8-megapixel still images from their 4K videos. If that wasn't enough to get you excited, the ZS100 can shoot at up to 10fps in burst mode (at full resolution), or 5fps with continuous AF.

This impressive 1-inch sensor is mated to an equally impressive LEICA 10x optical zoom lens, which offers an equivalent view of 25-250mm. This is a rather fast lens as well, offering a maximum aperture of f/2.8 at wide angle. Panasonic claims this lens/sensor combo will allow users to capture shots that are "clear, crisp, and natural; even when photographing at high ISO". This lens is aided by their new 5-axis HYBRID Optical Image Stabilization system, which will help you produce sharper handheld images in a variety of shooting situations.

Social media buffs will appreciate the ZS100's built-in Wi-Fi function, which allows you to connect the camera to your iOS or Android smart device for quick and easy photo sharing to your favorite social media sites. This Wi-Fi function even allows you to use your smart device as a remote viewfinder and shutter release, allowing you to control the camera from your smart device. Framing and viewing of captured content is handled via a high-resolution (1,040K dot) 3.0" touchscreen LCD.

The ZS100 will come in silver or black, with shipments starting in March. The suggested retail price will be $699.99.