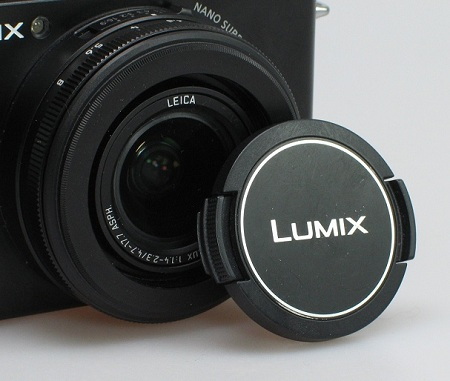 The F1.4 Leica lens on the Lumix LX7 is the star feature on this camera, as it provides quite a bit of versatility versus other fixed-lens cameras. You also can see the included lens cap here, which fits tightly onto the lens, unlike what you may find with some other lower-quality cameras.

The lens is mated to a large, 1/1.7" High Sensitivity MOS image sensor that delivers up to 10-megapixels of resolution at the default 4:3 aspect ratio. Panasonic claims that this sensor allows the LX7 to offer improved signal to noise ratio over the LX5 (up to 1.5dB). The use of their Venus Engine processing unit helps the camera capture images quickly, along with allowing for full HD video capture (AVCHD 60p or 60i), Intelligent NR (Noise Reduction), Multi-process NR, etc.

Panasonic included Power O.I.S. (Optical Image Stabilizer) with the Lumix LX7, and this feature is designed to combat camera shake and minor vibrations. When shooting at night, this can be an important feature to have available to make sure your images are as sharp as possible. However, the O.I.S. isn't quite as important on the LX7 with its small optical zoom lens as it would be on a model with a larger zoom lens.

Panasonic has included an aperture ring with this camera, which is something that's rarely found on fixed-lens digital cameras. As shown here, the FX7 has a aperture range of F1.4 to F8.0. Having a lens like this in the LX7 is pretty impressive versus other fixed-lens digital cameras.
You can see the aspect ratio switch here on the top of the lens housing, too, between the aperture ring and the camera body. It allows you to set the aspect ratio -- 1:1, 4:3, 3:2, or 16:9 -- by simply moving the switch. Having an aspect ratio switch is something I haven't seen on most other digital cameras - expensive, low-priced, and everywhere in between. With other cameras, you must switch the aspect ratio through the on-screen menus. Having this switch speeds up this process, so it's really great for a photographer who often changes the aspect ratio.
The downside to the lens is that it only offers a 3.8x optical zoom (24 - 90 mm), but the quality of this lens is so much higher than what you'd find on a standard point-n-shoot model that you'll likely be willing to suffer a bit of a trade-off in terms of magnification. You aren't going to be able to zoom in to shoot that photo of your daughter as she takes a shot from the other side of the soccer field, but the LX7 will create some amazing portrait and landscape scene photos, thanks to the high-quality lens.
Even with a relatively small zoom lens, the LX7 doesn't move very quickly through the zoom range, requiring about 2 seconds. I did count 16 distinct stops within that 3.8x zoom range, which is pretty impressive, allowing you to find the precise range you want to use.
Along the left side of the lens housing, you'll see another feature that's pretty rare for a fixed-lens digital camera: The focus switch. Through this switch, you can choose between manual focus (MF), auto focus macro (AF with macro icon), and auto focus (AF).
Manual focus adjustments are made through a switch on the top of the back panel of the camera, just behind the mode dial. There's no focus ring on the lens, as you might find with an interchangeable lens camera. As you're using manual focus, you'll see a magnified view of the center of the scene on the LCD, allowing you to make minute adjustments to achieve the sharpest focus.
Manual focus isn't available in a couple of shooting modes, such as Intelligent Auto and special effect/art modes, and the camera will give you a warning screen when you're in the wrong mode to use manual focus, asking you to switch to autofocus.
The measurements for the focus range for the LX7 are:
The pop-up flash unit on the Lumix LX7 is on the top panel of the camera near the area where your left index finger will rest as your holding the camera. Fortunately, there's a small area behind the popup flash where you can rest your finger, even while the flash is open. There's also a switch in the area behind the flash compartment through which you can open the flash manually. There's no way for the camera to open the flash compartment automatically.
Having a pop-up flash provides a better angle to the scene versus a built-in flash in the corner of the front of the camera, especially considering how far the lens housing extends from the LX7's body. Panasonic says the Lumix LX7 has a flash range of 2.6 to 27.9 feet (0.8 to 8.5 meters) when shooting wide-angle photos and 1 to 17 feet (0.3 to 5.2 meters) when shooting telephoto photos. During my tests, I didn't find that the flash was able to reach the far end of this range, but it still worked really well, and the flash responds very quickly for the next shot.
The LX7 offers quite a few flash modes, although the modes that are available depend on the shooting mode you're using. The flash modes are: Auto, Auto Red-eye Reduction, Forced On, Slow Sync Red-eye Reduction, Forced Off, and Flash Synchro.


The left side of the LX7's top panel contains a couple of the camera's nice features. You can see the pop-up flash compartment in the upper left corner of this image, labeled with "Panasonic DMC-LX7." The switch that opens the flash compartment is visible here, too, in the lower left.
To the right of the flash compartment is the hot shoe to which you can attach the optional viewfinder or other accessories. When you don't have anything attached to the hot shoe, a plastic cover (marked with "Push") protects the hot shoe's electronics, as shown here.
In the middle of this image, you can see the back of the hot shoe with the cover removed, along with the rectangular port to which an external viewfinder could be attached. The manual focus switch is visible in the upper right corner, too.
The right side of the top panel of the LX7 contains many of the primary controls for this Panasonic camera. On the upper right, you'll see the small red movie button, through which you can start and stop movies. The on/off switch is a good-quality switch, ensuring that it won't be pressed accidentally. The shutter button (in the middle of this photo) is surrounded by the zoom ring.
Finally, Panasonic included a mode dial with the LX7, which is great for quickly selecting the shooting mode that you want. The options on the mode dial (in clockwise order from the bottom) are Intelligent Auto (iA), Program AE (P), Aperture Priority (A), Shutter Priority (S), Manual Exposure (M), Creative Video Mode (movie camera icon and M), Custom 1 (C1), Custom 2 (C2), Scene Mode (SCN, 16 options available), and Creative Control (art palette icon, 16 options available).
You'll find a 3.0-inch TFT LCD screen on the back of the LX7, and it's a high-resolution screen, offering 920,000 pixels. It seemed a little dull to me, and the screen does have some glare problems when being used outdoors in sunlight, but you can pick from seven different brightness settings to try to combat the glare. Through the on-screen menus, you also can adjust the LCD's Contrast/Saturation, Red Tint, and Blue Tint - something we don't see on too many cameras.
At the upper right of this photo, you again can see the small switch that allows you to adjust the manual focus.
Before discussing the standard control buttons on the right side of the back of the Lumix LX7, notice the dial in the top right corner of the back panel. When using the on-screen menus, you can use this dial to scroll through the menus more quickly than using the four-way buttons.
The other control buttons look pretty standard, but they do provide some control over features that you may not find on less expensive cameras. I was surprised to find that there's no button dedicated to controlling the different flash modes here, as most cameras have (although you can assign the flash modes to the programmable Fn button).
At the top of the control buttons are the AF/AE Lock and Playback buttons. When looking through your stored images using the Playback button, you can use the scroll dial to move through them more quickly.
Panasonic has designed four separate buttons in place of the four-way switch that you see on many cameras, with the Menu/Set button in the middle. It'd be nice if these four-way buttons were a little bigger, but at least they're raised away from the camera, so they're pretty easy to use. When you're viewing menus on the screen, these buttons allow you to move between the menu selections. When in a shooting mode, though, these buttons are aligned with a particular shooting function. From the top, going clockwise, the four buttons allow you to set the following functions:
The two buttons along the bottom of the panel -- the Q.Menu and Disp. buttons -- give quick access to some of the camera's settings that are used most often. The Q.Menu button opens access to menus like the flash modes, the resolution, and the image quality options. The Disp. button removes icons and data from the screen while you're framing images.
The mini-HDMI and micro-USB ports are located behind a plastic hinged door on the right side of the Lumix LX7 camera. The door clicks into place.

As with most cameras, the battery and memory card slots are on the bottom panel, hidden behind a hinged door that locks into place with a switch. The LX7 makes use of SD, SDHC, or SDXC memory cards. The rechargeable Li-ion battery pack can shoot about 330 photos on a single charge, according to Panasonic, and my tests found that number is only a little high, which is an impressive battery life for a pretty thin battery.
Panasonic also included a separate battery charger with the LX7, which is a nice feature, because you don't have to charge the battery inside the camera. The battery charger plugs directly into an outlet without the need for any additional cables, which is also a nice feature.