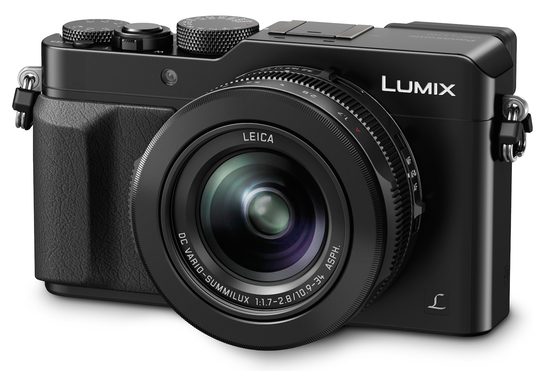 High-end all-in-one cameras have to be sharp to survive in today's digital camera landscape. They have to take pictures better than a cell phone but have the same ease of use and connectivity as one. The Panasonic Lumix LX100 II is everything and more than that.
This 17MP 4/3-inch High Sensitivity MOS Sensor camera has an incredible 24-75mm (35mm equivalent) F/1.7-2.8 LEICA DC VARIO-SUMMILUX lens that can shoot macro photography from as close as 3 centimeters away. Yeah... on an all-in-one.
The Lumix LX100 II's $1000 price puts it squarely against other all in ones like the Nikon COOLPIX P1000 with its 3000mm lens. But this is a totally different camera. You're not buying this camera for its telephoto lens, you're buying it for its super fast mid-range zoom that can deliver incredible bokeh and compact size.
Panasonic is putting a brand new 17MP 4/3-inch High Sensitivity MOS Sensor in this camera that's actually 21.77 MP over the total sensor. Like the LX100 the LX100 II has Multi-aspect shooting in which the camera isn't using the whole sensor but cropping it to get a 4:3, 3:2, 16:9 or 1:1. You can do this quickly and easily by using the multi-aspect ring. These different aspects are what gives you a 17MP image when having the camera set in 4:3 mode.
Panasonic is king of the 4/3-inch sensor having implemented various versions of it in almost all its higher-end mirrorless cameras like the GH5S, so, the image clarity promises to be excellent. When you combine that with the high-speed Venus Engine Image processor, you're getting a natural true to life image.
You can shoot 4K in 30p & 24P as an MP4 and shoot burst mode photos up to 11 fps like the LX 100. It has Wi-FI and Bluetooth 4.2 for low energry consumption when connected to your tablet or your phone to share images.
One of the biggest selling points of the Lumix LX100 II is not just the great images you'll get from it, but how you'll use it. It has a 2.7m dot 16:9 Wide Screen LVF (live viewfinder) with an eye-sensor to turn it off and on and an Aperture ring, a shutter speed dial and an exposure compensation dial. If you shoot in manual mode this camera forgoes the clunky menus that so many other all-in-ones have with physical controls. It feels like you're using a high-end full frame camera that costs twice the price.
The camera also dabbles a lot with the notion of 4K photography. It has 4K Burst Shooting of up to 30fps at 8MP, 4K Burst (Start/Stop) and 4K Pre-burst. You can also shoot 4K photos in any of the aspect ratios that the camera is capable of shooting. There's also an auto marking option for 4K photos where the software allows you to jump to the nearest shot that has the most amount differences in it.
It's F/1.7-2.8 LEICA DC VARIO-SUMMILUX lens has a power optical image stabilizer built in. It's made out of 11 elements in 8 groups with 2 ED lenses. Five of the lenses are aspherical with eight of them having aspherical surfaces. That keeps the images crisp and sharp, but also allowing you to get great Bokeh. This is a pocket camera you could shoot portraits with just as easily as you could shoot landscapes or close up of bugs. It even has a POST FOCUS system which allows you to adjust the focus AFTER the photos have been taken.
The Panasonic Lumix LX100 II could be the perfect second camera or travel camera for professionals and amateurs alike. It has pro features, physical buttons, dials and that outstanding Leica lens built right in. The only glaring negative off the bat is that the rear touchscreen is not adjustable. Regardless, the Lumix LX100 II appears to be another top of the line addition to the LX family and a camera that we can't wait to get our hands on.
KEY FEATURES
PRICING & AVAILABILITY
The Panasonic Lumix LX100 II will be available in October 2018 for $999.99