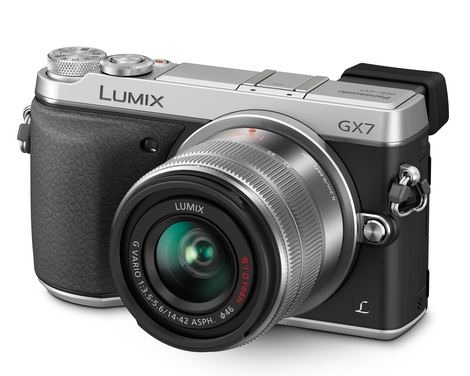 Panasonic continues to add powerful models to their popular line of Lumix G-series Micro Four Thirds cameras, which offer similar quality and performance to a dSLR, but in a much smaller package. For the summer of 2013, Panasonic unveiled the Lumix DMC-GX7, one of the most advanced models in the line to date.

To start, The GX7 received a newly developed LIVE MOS image sensor, which features "cutting-edge Semiconductor Fine Technology", along with larger photo diodes along with a new rounder lens design. They coupled the new sensor with the latest version of their Venus Engine processing unit. This combination allows them to claim that this 16-megapixel (effective) sensor is 10% more sensitive than the sensor found on the GX7's predecessor, the GX1, along with offering improved noise reduction, better detail reproduction, and greater saturation.

Being that the GX7 is being aimed at "the Hybrid Photographer", it can also record full HD video in AVCHD and MP4 formats, with stereo round and a 60p frame rate for high-quality, smooth video. For those who like the cinema look more, there is also a 24p option.

Framing and viewing stills and video are handled on either the 3.0-inch touch screen LCD or the resolute new tilting LVF (Live ViewFinder). The latter boasts a resolution of 2764k dots, 100% frame coverage, and and eye sensor that automatically turns the LVF on and off. The GX7 also boasts an impressive Eye Sensor AF mode, which starts the autofocus process as soon as you start to look through the LVF. The large rubber eye cup on the LVF helps make it much more comfortable to use compared some of the EVFs seen on other cameras, and it helps to block out some of the ambient light. The fact that the LVF tilts just adds to its appeal, allowing you to look down into the LVF, or straight on.

One of the most significant additions to the GX7 is its built-in image stabilization system, which Panasonic claims is, "nearly as effective as the MEGA O.I.S." found in their lenses. This system, combined with the new Live MOS image sensor. will help you capture sharper photos in both low-light and long telephoto instances. To top it off, the GX7 boasts a fast maximum shutter speed rating of 1/8000 of a second, making it the fastest gun in the Lumix line-up.

As with most of their G-series cameras, the GX7 offers a plethora of exposure options for beginners to professional photogs. Amateurs will appreciate the camera's Advanced 1A+ (intelligent Auto Plus) mode, along with over 20 pre-programmed scene modes for both still and video. There's also the Creative Control mode, which allows you to choose from a variety (22) of creative effects that can be applied to both still photos and video. Advanced users will be glad to see the GX7 retains the classic P/A/S/M options, along with the front and rear control dials for aperture and shutter speed (their operation will depend on which mode you are using).

Lastly, what would a camera from 2013 be without Wi-Fi? Yes, the GX7 also includes Wi-Fi connectivity (IEEE 802.11 b/g/n), as well as NFC (Near Field Communication) technology so you can use your Android or iOS powered smart device (smart phone or tablet) as a remote viewfinder and shutter release, or instantly upload photos to your favorite social media sight.

The GX7 appears to be one impressive ILC / EVIL camera, one we are excited to get our hands on. Check back in the coming months as we update this page once we get a unit in for evaluation.

Panasonic Lumix DMC-GX7 features:
The Lumix DMC-GX7 sports a sophisticated look and feel with its silver and black magnesium alloy, full die cast frame with rubber accents. The body only kit will sport a price tag of $999.99 USD, or you can get the standard zoom lens kit with the newly updated 14-42mm II kits lens for $1099.99 USD.