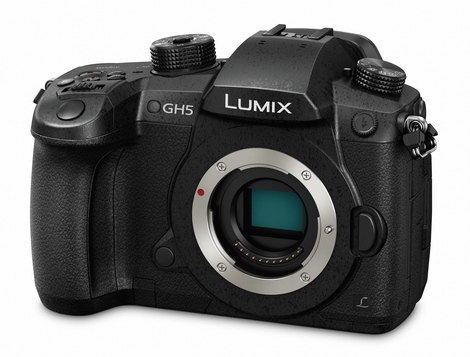 Panasonic's flagship ILC is getting a complete overhaul for 2017. Sharing only shutter speeds / life span, ISO range, and moving recording formats with the outgoing GH4, the Lumix DMC-GH5 is entirely new.

A 20.3MP Digital Live MOS sensor pairs with the Venus Engine, producing a camera capable of shooting up to 12fps in full resolution, up to 30fps in 6K / 18MP, or up to 60fps in 4K / 8MP resolution. DFD and Contrast AF technologies not only allow for blazing focus capabilities (up to 480fps), but allow for Focus Staking and Post Focusing in certain modes. The GH5's 5-axis Dual Image Stabilizer combines both an O.I.S. (Optical Image Stabilizer, 2-axis) with compatible lenses AND B.I.S. (Body Image Stabilizer, 5-axis) for up to 5 steps of exposure compensation and ultra smooth videos.

Speaking of video recording, the GH5 will be able to shoot 4K/30/25/24p 4:2:2 10bit videos as well as 4K/60p 8bit videos with no sensor cropping, so your lenses will retain their still image focal length. For context, 4:2:2 10bit video is necessary for making professional quality High Dynamic Range videos; it's a feature found on professional movie cameras, but not on high-end DSLRs like the 5D Mark IV. It's a features that sets the GH5 in a league of its own for mirrorless cameras (and even most DSLRs).

And if all of that weren't exciting enough, Panasonic has already announced that GH5's first few firmware upgrades will upgrade its video capabilities even further. Starting in April 2017, the GH5 will receive the ability to record Full HD 4:2:2 10bit videos. Then in July, 2017, add in 400Mbps 4:2:2 10bit All-Intra video recording in 4K 30p/25p/24p along with Full HD, high resolution video recording in Anamorphic mode and Hybrid Log Gamma in Photo Style mode with USB tethering (this means you can record 4K HDR video and watch it natively on consumer Ultra HD TVs).

Dustproof, splashproof, and freezeproof, the GH5 also boasts Wi-Fi and Bluetooth for wireless control and transfer of images as well as dual UHS-II SD Memory Card Slots for maximum performance. Lastly, there's a 3.6-dot OLED LVF and a 3.2" free-angle LCD screen with 100% field of view for composing your shots.

Prior to CES, we sat down with Panasonic in their Hollywood offices where we were able to hold and photograph (but not use) a pre-production model GH5 paired with the newly announced LEICA 12-60mm f2.8-4.0 Power O.I.S lens. The new body remains light and the ergonomics are improved -- the camera feels awesome in hand, rugged and solid, but lacks the bulk of larger DSLRs. The 12-60mm f2.8-4.0 combo should make for a compact and versatile pairing with excellent low light performance as well as shudder-free video.

As part of our demonstration, we compared the GH5's color, contrast, and fine detail capabilities to the outgoing GH4. The GH5's new sensor and improved processing algorithms are able to deliver bolder colors while deemphasizing flat areas likes skies and sharpening detailed areas like a field of flowers. The new processor also deemphasizes aberrations caused by shooting high-contrast edges, like buildings against a bright sky. From these specific demonstrations, the GH5 renders wonderfully natural images that are more colorful and more detailed and less noisy than the previous generation. It's also important to note that the GH5 handles color completely differently than the GH4 so you won't be able to transfer over custom color profiles (and end up with the exact same results) if you choose to upgrade. Honestly, though, you won't want to.

At the end of the presentation, I found myself thinking about the incredible Olympus OM-D E-M1 Mark II, a direct competitor for the GH5, and one of the best camera systems released in 2016. At first glance -- and without the ability to test them side-by-side -- the E-M1ii is a much more still-focused camera system, with better full-resolution speed. Both systems offer extraordinary image stabilization, but the Olympus can go up to 6.5 steps of exposure compensation. But the GH5's video capabilities are in a league of their own. 2017 is a very young year, but the GH5 just set a very high bar that most professional ILC and DSLR camera systems will have trouble meeting. This is all terribly exciting. We can't wait to get our hands on one to review.