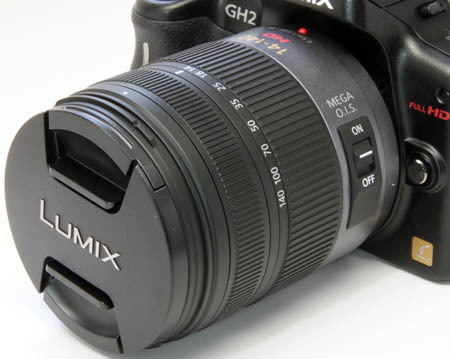 We are testing GH2 with Panasonic's Micro Four Thirds Digital Interchangeable Lens LUMIX G VARIO HD 14-140mm/F4.0-5.8 ASPH./MEGA O.I.S. Here you can see the lens on the body just like a standard dSLR. One of the few differences here is the lack of a manual focus switch on the lens where the MEGA O.I.S. switch is. This feature is built into the camera instead and will be shown below. However, the O.I.S. system will be built into the lenses than you buy, not into the camera body itself.

Here is the GH2's 4/3 mirror-less mount system that has been developed by Panasonic and Olympus. With the distance between the mount and image sensor, by removing the mirror, they have been able to drastically reduce the size of the camera body. This 16-Megapixel sensor has a Supersonic Wave Filter Dust Reduction System to keep the sensor and your images dust free.

The GH2 has some amazing video capture capabilities, assisted by the stereo microphone that is built into the top of the pop-up flash unit. This adds great stereo sound to your home HD movies.


Shooting and viewing your images can be done on either the Live View finder or the Swiveling LCD screen. The Live View Finder has an approx. 100% field of view and gives you the feeling of shooting with a dSLR with one bonus, all of the information is displayed exactly the same way as it is on the LCD screen. This is also a great way to extend the battery life of the camera. Next to the View Finder is a sensor that will automatically switch from the LCD to View Finder when the camera if held up to you face.

If you prefer to use the 3.0-Inch, 460k dot Touch LCD screen or you are in a tough shooting situation, you will be pleased to see that it can be moved and rotated to shoot around objects as well as moved to avoid glare from direct lighting. The screen can also be used to capture images just by touching it. This also tells the camera to focus where you touch.

On the top right of the camera body, you have a few of the camera controls including the Mode Dial with the power and burst/self timer modes built on. Next is the Shutter release for still images with a dedicated video record button under it. Finally at the bottom right is the Fn1 button, which is the first of 3 Fn buttons that you can program.

On the other side on top is the switch for the focus modes as well as a dial that determines the camera's AF (auto-focus) mode. To the far right is the switch to open the built-in flash unit.

Controls on the back: To the right of the viewfinder you can see the Play and AF/AE Lock buttons. Next is the selection dial, for quickly changing and selecting settings. To the right of the LCD you can see the Q. Menu, which allows you to change any setting that you see on the screen and the Display button, which controls the amount of information that is overlaid on the LCD or LVF. Next, we have the 4-way controller. It's used to navigate the menu system, scroll through stored files, and access various shortcut options. Press it 'Up' to adjusts the ISO, 'Right' for white balance, 'Down' for Fn3 which can both be programed to the user's liking. Lastly we have the Shutter Speed Effect/image delete button. This gives you a preview of what your image will look like with current camera settings.


The I/O ports are on the left side. At the top left is a combination input for using either an external microphone or the optional remote shutter release (right). Next is the MiniHDMI I/O port for full HD output. Last we have the combination port on the bottom that handles both standard definition A/V OUT (user- selectable NTSC or PAL) for output to a TV as well as USB 2.0 (high-speed) connectivity for transferring image data to the host computer (left).


The GH2 is equipped with a Secure Digital (SD) memory card slot and is compatible with any capacity SD, SDHC, SDXC or MMC card. Here the camera is shown with a PNY Pro 8GB Class 10 (20MB/S) SDHC card.

Powering the GH2 is a 7.2V, 1200mAh Li-Ion rechargeable battery. This is a very similar battery to that of the GH1, but it does allow for a couple more images allowing up to 320 images with the LCD and 330 with the EVF. These numbers are calculated for using the 14-140 lens. The quick charger shown above is also included with the camera and allows you to keep your battery, and a spare, charged and on hand at all times.