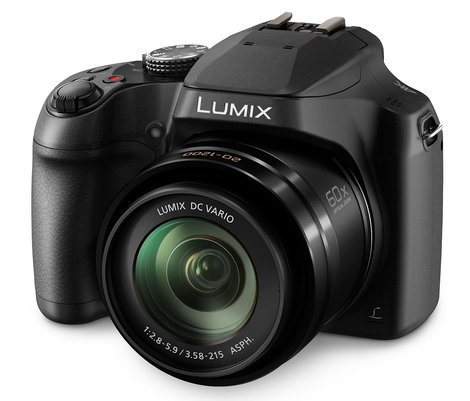 After nearly four years, Panasonic has updated their popular LUMIX DMC-FZ70 from 2013 with the all new LUMIX DMC-FZ80 for 2017. While the exterior looks very similar to its predecessor, the FZ80 has received some appealing upgrades, which we'll cover below. One feature that remains is the awesome LEICA f/2.8 60x optical zoom, which covers an equivalent focal range of 20 - 1200mm! To help keep things steady, Panasonic has included their proven POWER O.I.S. (Optical Image Stabilization) system.
The first note worthy upgrade to mention is the FZ80's ability to capture 4K UHD video, which is thanks in part to the new 18.1-megapixel MOS image sensor. Panasonic has included their latest rendition of the Venus Engine image processor, which helps the camera process the 4K video, as well as allows for the camera's blazing fast autofocus and burst mode speeds (more on that later).
The FZ80 also received some upgrades in the display/viewfinder department, with two high-resolution displays to help you frame your shots. First up is a high-resolution (1040K dot) 3.0-inch LCD with "static-type touch-control system". This new touch control system allows you to "immediately focus on a subject and even release the shutter by simply touching the screen." The Live ViewFiner (aka LVF) has been improved also, with a 0.2-inch type display with 1170K dots. Both monitors offer 100% frame coverage, as well as fast frame rates (60fps) to reduce image lag when shooting fast moving subjects.
Speaking of fast moving subjects, the FZ80 offers impressive burst shooting speeds, with continuous shooting at up to 10fps when using single AF, or 6fps with continuous AF. This, coupled with the generous zoom range, makes the FZ80 an ideal bridge camera for wildlife photography; which is aided even further by the lens' fast maximum aperture.
Panasonic has also included an improved AF system, with the FZ80 featuring Depth From Defocus technology (aka DFD AF). This system decreases focusing times by calculating "the distance to the subject by evaluating two images with different sharpness levels at a high 240-fps signal exchange speed. As a result, the LUMIX FZ80 achieves an AF of approximately 0.09 sec. This benefit increases as the focal length grows."
And, what would a camera be in 2017 without built-in Wi-Fi. The FZ80 offers IEEE 802.11 b/g/n Wi-Fi to connect to any Android or iOS powered smart device, thanks to their free Panasonic Image App. This allows you to quickly share photos on social media, as well as control the camera remotely (which in our opinion is the greatest benefit of Wi-Fi).
Last but not least, the FZ80 will offer Panasonic's Post Focus technology, which allows you to select the focus area of the photo after it has been captured. Panasonic notes that this is possible thanks by "combining the high-speed, high-precision DFD (Depth From Defocus) auto focus technology with 4K technology. Both Post Focus and Focus Stacking can be activated quickly with the dedicated button on the top panel."
This is one camera we're excited to get our hands on. Stay tuned for our in-depth review once they are available.
Panasonic Lumix DMC-FZ80 Features:
Price & Availability

The Panasonic Lumix DMC-FZ80 will be available in March with an MSRP of $399.99.