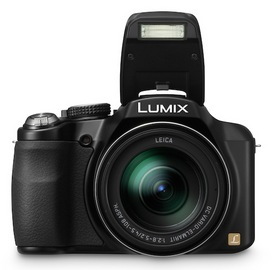 The Lumix DMC-FZ60 is part of Panasonic's high zoom series of cameras, second in specifications only to the flagship model FZ200. The camera sports a number of impressive specifications: a powerful 24X zoom, high-sensitivity 16MP sensor, 10fps burst mode, and 1080p high-definition video. The Leica lens offers a wide-angle view, giving you a full breadth of framing options from 25mm to 600mm (35mm equivalent). Helping out the powerful zoom is the inclusion of optical image stabilization, so you can get a crisp shot even when zoomed in close on a faraway subject. This system also helps minimize blur when using a somewhat slow shutter speed while hand holding the camera.

The body is compact and lightweight (weighing just over 1 pound with the battery and memory card installed), yet offers a substantial handgrip to help you keep the camera steady. The layout of the buttons and controls is well thought out, and offers two customizable function buttons, plus two custom positions on the mode dial. To help you make setting changes quickly, there is a thumb dial at the top right of the back panel, and a quick menu button below the four-way control. The thumb dial helps you move through the menus quickly, and the quick menu button brings up the most commonly adjusted settings. Of course there are the additional ISO and white balance positions on the four-way control. On the four-way control you also get a customizable function position (the other programmable function button is the AF/AE lock button, by default).

Additional dedicated buttons make it easy to make adjustments on the fly - the autofocus button on the top panel launches the focus menu. Beside it the dedicated burst mode button launches the continuous shooting menu. Having a mode dial at the ready lets you quickly change from, say, iAuto mode to a creative filter mode or scene mode. The mode dial also offers full manual control in addition to aperture-priority and shutter-priority positions.

The LCD is sharp and bright, though its 460,000-dot resolution is not the highest available. It offers a power LCD mode for making it extra bright when seeing it might be difficult, such as on a very sunny afternoon. You also get the electronic viewfinder as a backup for such occasions, which is a welcomed option. The resolution of the EVF, at 202,000 dots, is adequate for framing shots, but I would not trust it when using manual focus (which is an option with this camera). The camera does offer on-screen magnification to help you focus manually, but even with the fairly high resolution of the LCD, it can be difficult to eyeball the focus without some indicator (such as a flashing AF box).
In addition to the dedicated video recording button beside the shutter button, there is a creative movie mode position on the mode dial, which allows you to adjust settings such as the aperture. You can record high-definition video at 1920x1080 pixels or 1280x720 pixels, as well as standard-definition video at 640x480. Within the HD video menu you can choose AVCHD at 60i or 50i at 1920x1080, and AVCHD 60p or 50p at 1280x720. MP4 is an option in both of these menus as well.

The long story short here is that the camera offers many of the features and functions you will find in a dSLR or rangefinder camera, without the higher price and need for multiple lenses. There are optional conversion lenses, however, such as a telephoto converter lens and close-up lens, which require an optional lens adapter.

In addition to intelligent auto mode (iAuto), you can use iAuto plus, which allows you to adjust the exposure compensation, background blur setting, and color adjustment by pressing the rear dial. Note that I said "pressing" - the rear thumb dial doubles as a button, allowing you to make a selection with it rather than having to move your thumb down to the menu/set button on the four-way control. Very handy.

Via the quick menu button, you can quickly change the photo style from natural to vivid, for example, and switch the autofocus and metering modes. Exposure compensation of -3 to +3 stops is also found here. In all cases you can use the thumb dial to scroll and make a quick setting adjustment.

One example where the serious photographer might get stymied is the shutter speed of 4 seconds to 1/2000 second, which is probably fast enough to freeze most fast action, but does not allow you to make long exposures of a star-filled sky, for example. Stargazers usually require a 30-second or longer exposure, or "bulb", which can be triggered via a remote cable shutter. Similarly, the aperture range of f2.8 to f8 offers a wide opening that's great for capturing shots in low light, but not being able to stop down smaller than f8 can be limiting in some situations, and possibly affect the sharpness of the image.

Image quality is, on the whole, impressive. One common problem with powerful zoom lenses on affordable cameras is vignetting or distortion near the edges. In this regard the Lumix DMC-FZ60 exceeds expectations. Although a close examination of images at 100% on a 27-inch display reveals some distortion and blur at the edges and corners, I did not spot any chromatic aberrations. There is no unsightly digital noise, just some slightly fuzzier edges and, for example, the leaning of objects you know to be vertical. For a camera at this price, it's a fair trade-off for the powerful 24X zoom. The flexibility of such a powerful zoom is easy to understate - having such a broad range while still having a wide angle allows you tremendous flexibility. With the help of the optical image stabilization, I was able to get sharp shots even hand held at full magnification (600mm in 35mm equivalent) - though the autofocus in default mode sometimes had difficulty locking onto my subject.

Movie quality was not as impressive as still image quality. Despite the high-definition specification, video I recorded in ample outdoor light looked a little fuzzy - even when viewed at roughly 5 x 9 inches, never mind at full-screen on a 27-inch display. Video shot indoors suffered from more obtrusive digital noise, and the autofocus proved slow to adjust to movement and zooming.

The autofocus was not always stellar when shooting still images either. Although I was able to get sharp shots of moving toddlers at full 24X zoom, some of them were blurry, captured with inaccurate focus, even when zoomed out to wide angle. This is where the generous customization of this camera comes into play. When default autofocus fails, you are just a few button presses away from switching to, say, AF tracking or spot AF, if that's what you need to get the shot. Face detection AF is also an option.

This camera does not offer a flash shoe for attaching an external flash unit, but its built-in flash throws around a lot of light, given its small size. The company's specification gives the flash a 44.3-foot range, but my experience did not bear this out. When shooting at ISO 100, the flash had a range of about 15 feet before falling off. But, taking a tip from the manual and using ISO auto helped increase that range to maybe 25 feet - good enough to take an attractive portrait in an average-size room with both the person and the background adequately illuminated.

The high ISO range of this camera is handy for getting shots without using the flash. A look at the Sample Photos page shows the full range of ISO settings in action. There, you will see the increasing noise and distortion at the upper settings, ISO 1600 and ISO 3200. These shots are taken with a camera mounted on a tripod, so it's likely that when hand holding the camera in low light you will get more digital noise than is shown here. By comparison, you might look at the samples from Panasonic's own Lumix DMC-G5, a micro four-thirds camera that runs about twice the price of this model. There, you will see less noise, sharper details, and less cloudiness in bright colors at the higher ISO settings. But all in all, for the price, the DMC-FZ60 does a good job of managing digital noise in low-light shots.

The biggest disappointment of this camera is the burst modes. Despite Panasonic's claims of being able to shoot at 5 frames per second and 10 frames per second, there is one big caveat: not for long. In our timing test results, the 5fps and 10fps modes averaged out over 10 images to just 2.2fps and 1.6fps, respectively - yes, you read that right, the faster mode proves slower in the long run. That's because we compute these speeds over 10 images. Only the 2fps burst mode actually takes 10 images at the advertised clip. The other two modes can only muster three or four frames at the purported speed, then the camera pauses. In 10fps burst mode the camera paused for anywhere from 1.4 second to 3.5 seconds before resuming burst shooting. The results were the same whether we used a Class 4 SD card or a Class 10 UHS-1 SD card.

Battery life is an impressive 450 shots. The rechargeable Li-ion battery is removed from the camera for recharging, so you have the option of having a second battery on hand for long shooting sessions (or extended periods off the grid).

Bottom line - If you like a lot of dedicated buttons and manual controls at your fingertips, but don't want to spend the money for an interchangeable lens camera, the DMC-FZ60 will likely fit your hand like a glove. Its powerful 24X zoom, optical image stabilization and high light sensitivity all combine to give you tremendous flexibility for capturing attractive shots in most situations. As long as the disappointing burst modes won't trip you up, and you don't demand ultra-sharp video from your camera, this full-featured high zoom model should perform to your expectations.
You can check out the price of this camera on Adorama by clicking here.