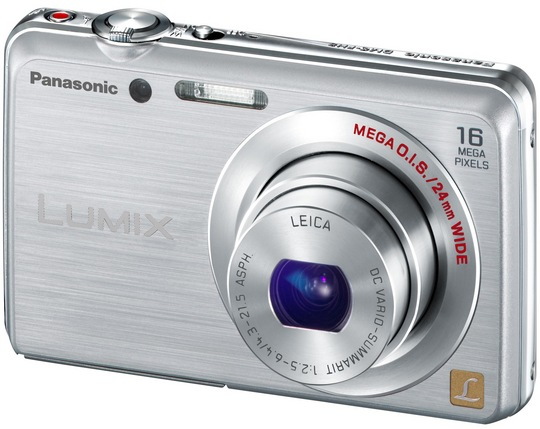 The Panasonic LUMIX DMC-FH8 is one of two new FH-series cameras announced at CES today. Though the FH6 is slightly more compact and more than likely cheaper, the FH8 boasts a variety of upgrades over its sibling digicam, most notably a larger 16-megapixel CCD Sensor (vs. 14.1), a 3.0" LCD screen (vs. 2.7"), 720p HD video recording in MPEG-4 (vs. Motion JPEG), three more color options, and two additional iA and Effect modes: 1) AF Tracking for keeping up with fast moving subjects, and 2) Miniature Effect, for an in-camera tilt-shift effect.
Other than that, the two cameras are similarly equipped. Highlights include a 24mm wide angle lens with a 5x optical zoom and 10x iA Zoom (digital zoom). Panasonic's proprietary Venus Engine image processor is the brains behind the operation, allowing for the camera to be slimmer and faster.
The two new FH series' iA (Intelligent Auto) Mode includes Optical Image Stabilization, Intelligent ISO control, Face Detection, Intelligent Scene Selector, and Intelligent Exposure to help any novice look like a pro. But don't worry if you do make a mistake, the Image Effects mode has Auto Retouch and Beauty Retouch in addition to Panorama Shot, which allows for both horizontal and vertical panoramas to be built in-camera from multiple exposures.
The FH series is designed with the modern shutterbug, which the capability to charge via a your computer's USB port or the included AC charger. Speaking of your computer, LUMIX Image Uploader software is bundled in here, and allows easy access to social media sites like Facebook and YouTube.
Panasonic LUMIX DMC-FH8 Features:
UPDATED: The Panasonic LUMIX DMC-FH8 will be available in early March (2012) in silver, red, violet, and black with an MSRP of $149.99.
Additional Product Views: