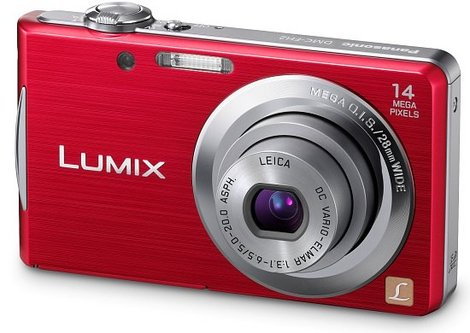 Panasonic's LUMIX FH-series of point-and-shoot digital cameras will see performance upgrades for 2011 as well as 20% slimmer profiles than their predecessors. The ultra-compact 14.1-megapixel DCM-FH2 features a newly-incorporated Venus Engine VI (which purports to enhance resolution, zooming capabilities, start-up speed, and auto focusing) as well as the newly-developed retractable 28mm wide-angle LEICA DC lens with a 4x optical zoom (increased to 5x with the Intelligent Zoom feature).

The Panasonic FH2, like all cameras in Panasonic's LUMIX model line, features their suite of iA (Intelligent Auto) modes. New to this model year are Intelligent Exposure (prevents blocked shadows and blown highlights), and AF Tracking (for following moving subjects). Remaining features include Intelligent ISO Control, Face Detection, MEGA OIS (Optical Image Stabilization), and Intelligent Scene Selector. Another nice feature is the ability to - directly from the camera when it is connected to a PC - upload images to Facebook and videos to YouTube. Built-in memory has increased this model year to 70MB, though realistically at 14.1-megapixels, this memory will fill up fast.