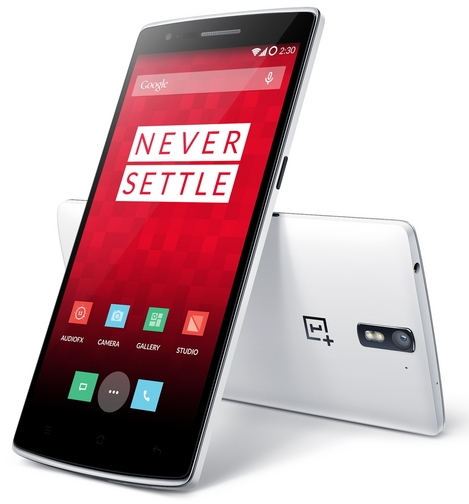 OnePlus has launched what it calls the "2014 Flagship Killer", the OnePlus One. The CyanogenMod-powered smartphone was "designed to be beautiful, timeless, and comfortable in the hand." It is only 8.9mm thick, though its tapered edges drop off to 4.6mm. Inside the One, you will find the world's fastest smartphone processor (the Qualcomm Snapdragon 801), 4G LTE connectivity (though no support for Sprint), 3GB of LP-DDR3 RAM, and 16-64GB in available internal storage (though no microSD slot).
The One's main camera is a 13-megapixel second generation Sony EXMOR CMOS image sensor capable of recording 4K (Ultra HD) video in full stereo sound, as well as 120 frames-per-second Slow Motion at 720p HD. The f/2.0 aperture lens features six physical elements and a dual LED flash. There's also a secondary, front-facing 5MP camera, for selfies. To view your latest shots and videos, the One boasts a large 5.5-inch Full 1080p HD touchscreen display with 178-degrees of visibility and enhanced durability thanks to LTPS and TOL (Touch On Lens) technologies.
For connecting the phone to the Internet or other digital devices, the One boasts dual-band Wi-Fi, Bluetooth 4.0, and NFC. It also features GPS, a digital compass, built-in stereo speakers, a tri-microphone with noise cancellation, and a 3.5mm audio jack.
OnePlus One Features
The OnePlus One is available now (through OnePlus Phone Smash). The 16GB Silk White will cost you $299, while the 64GB Sandstone Black model will cose $349.
Additional Product Views