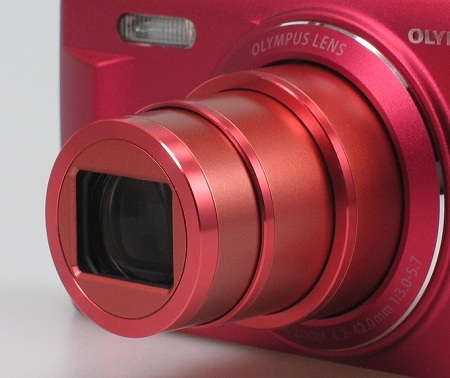 Olympus included a 10x optical zoom lens with the VR-350, which offers a 24 - 240 mm equivalent zoom range. In today's market, 10x has kind of become the dividing line for thin point-n-shoot cameras. It's becoming tougher to sell inexpensive digital cameras that don't offer a larger zoom lens, so it's nice to have the versatility available with this camera's lens. The VR-350's aperture range is F3.0 at wide angle and F5.7 at full telephoto.
The edges of the lens housing in the VR-350 extend a fraction of an inch away from the camera body, but the entire lens barrel retracts inside the lens housing when the camera is powered down. There's also a cover that automatically protects the lens glass when the VR-350 is turned off.
When the VR-350 is powered up, the lens barrel extends about an inch beyond the lens housing at the minimum optical zoom setting. When you extend to the full 10x zoom, the lens barrel's length is about 2 inches beyond the camera body.
The measurements for focus range for the VR-350 are:

Olympus has placed the tiny built-in flash unit to the upper left of the lens housing. Even though the flash is off-centered and the lens extends quite a ways from the camera body at full telephoto, I didn't notice any odd shadows in my test photos shot with the flash. However, this is always a possibility with this type of design, depending on the angle at which you're shooting.
Flash photos were surprisingly well exposed and sharp with the VR-350. Often times, point-n-shoot cameras with tiny flash units don't perform well in low light, but this Olympus model did a nice job.
Although the VR-350 responds a bit more slowly when using the flash, the camera's overall performance level is well below average, and it's unlikely you're going to notice the slight additional delay in shutter lag and shot-to-shot delays resulting from using the flash versus shooting without a flash.
According to Olympus, the working range for the VR-350's flash is:
The VR-350's 3.0-inch LCD screen (measured diagonally) is one of the nicest features of this inexpensive camera. It's very sharp and bright, and you'll have a hard time finding a nicer LCD screen in this price point among point-n-shoot cameras.
Unfortunately, Olympus doesn't give you much control over the brightness of this LCD screen. You can choose either Bright or Normal for the LCD screen's settings through the on-screen menu. Although glare on the LCD while lining up photos isn't a huge problem with the VR-350, the lack of multiple brightness settings can make it tough to counteract any glare you may experience. In addition, it's nice to have multiple options for dimming the LCD to help conserve power when the battery is running low.
The control buttons on the back panel for the VR-350 are pretty typical for a point-n-shoot camera. There aren't many options here for making extensive changes to the way the camera works.
The video button is in the upper right corner of the back panel. You can start and stop video recording with this button. The Playback button is above the four-way button, and it allows you to review the images stored on the memory card.
On the upper part of the four-way button, you'll find the Info button, where you can change the data that's displayed on the screen during still image shooting or when reviewing images during Playback. At the bottom of the four-way button is the Delete function. On most cameras, the four-way button allows you to control the flash and the self-timer, but Olympus has chosen to make you control those features through an on-screen shortcut menu.
The OK button is in the middle of the four-way button, and it allows you to make menu command selections. While shooting, you also can open the on-screen shortcut menu with the OK button.
Along the bottom of the control buttons are the Menu button on the left and the Help button on the right. To open the camera's primary menu screens, press the Menu button. You then can navigate through those menus using the four-way button. The Help button allows you to read photography tips and find specific shooting information for the VR-350.
Olympus has placed the battery/memory card compartment and an exposed USB port on the bottom panel of the VR-350. Without a cover for the USB, I'd be a little worried about some damage occurring to this port at some point.
The VR-350's battery/memory card compartment is protected by hinged door, which is locked in place with a latch. The hinged door is a little flimsy, and I could see someone accidentally snapping this door off if the camera gets bumped while the door is open.
The VR-350 will work with SD, SDHC, or SDXC memory cards.

Olympus' official estimate of battery life for the VR-350 is 300 photos on a full charge, and my tests were close to that number; at around 250 photos per charge. The battery has some thickness to it, which is good for providing decent power.
You'll have to charge the battery inside the camera through a USB cable and an AC adapter, as Olympus doesn't provide a separate battery charger. This, unfortunately, is common now with inexpensive, point-n-shoot cameras. You may want to purchase a second battery, just to be sure you have enough power for an extended photography session.