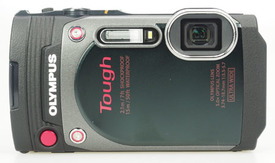 The Olympus TG-870 is a ruggedized, compact camera built to withstand punishment. It is waterproof to 50 feet, shockproof to 7 feet, and crushproof up to 220 pounds. It records 16-megapixel images and can record HD video at 60 frames per second, as well as high-speed movies at 120fps or 240fps. The TG-870 does not record RAW files. There are four underwater shooting modes, and a healthy assortment of effects and filters, including a full 360-degree panorama mode.

At 4.4 (w) x 2.5 (h) x 1.1 (d) inches, the TG-870 is not the most compact point-and-shoot, but it's not particularly bulky either, considering its ruggedness. At 7.8 ounces, it has a little heft to it, but if you plan to go rappelling off a rock face or swim with sharks, that's a comforting attribute - it feels solid. To record the locations of your adventures, the camera comes with GPS, and also offers Wi-Fi connectivity. You can use the OI Track app and transfer your GPS logs to a smartphone along with your photos.

The LCD (which has a resolution of 921k dots) can flip up 180 degrees to help you frame your selfies while in exotic locales. There is a programmable button on the front face that you can use as the shutter button, rather than having to use the shutter button up top. You also can program the movie record button on the back panel to perform a different task. In addition to the standard tripod mount on the bottom of the camera, there is a second tripod mount on the side opposite the battery door. This allows you to mount the camera vertically.

The zoom lens offers a modest 5x magnification, and a wide angle of 21mm. The aperture range is f/3.5-5.7. The lens does not protrude from the camera body, thus protecting it, and also keeps the came­ra compact. Similarly, the flash is built into the body and does not pop up from the chassis.

The camera offers 21 scene modes. In addition to typical scene modes for landscapes and night scenes, four scene modes are dedicated to underwater photography. An e-Portrait mode aims to smooth skin tones so people look more attractive on an HDTV. I particularly liked the super macro mode, which you select on the mode dial. Standard macro mode is something the camera selects automatically when you focus it on a close object.

There are three focus modes: Face/iESP, spot, and AF tracking. I found the first two modes worked well, but I was less impressed with the tracking AF. I routinely found that after selecting my subject within the AF box by pressing the OK button, the camera failed to follow my moving subject. And, when it did, it seemed a little slow.

The camera offers seven picture modes and 13 filters you can use to spice up your photography. All of them are accessible from the main shooting screen via the four-way control. I liked a lot of what these modes and filters had to offer. The picture modes offer subtle changes the color, such as a vivid or natural, and offer an imitation of a fish eye lens and reflection, whereby the top half of the frame is reflected in the bottom half of the frame. You can get creative with the art filters, creating something that looks like a watercolor painting or a photo taken by a pinhole camera. I particularly liked the dramatic tone filter, which added a lot of high-contrast drama to an otherwise very monochromatic cloudy sky. You can use most of these filters while recording video as well, though I found that many of them caused the footage to have very jerky movement (apparently recorded at a low frame per second rate).

Program mode offers the most customizable settings, though there is not an aperture- or shutter-priority mode, or a full manual mode. The eight-position mode dial gives you quick access to these basic shooting modes. Selecting settings for each mode is a matter of navigating a column of icons on the right side of the screen. Navigating to each icon expands to offer a menu of choices. This is a welcome arrangement, given that the four-way control does not include a thumb dial. Having a healthy assortment of settings available from the main shooting screen means you do not have to navigate through the main menu.

Image quality is good in daylight. I found most details sharp and colors accurate. However, at the full wide angle the lens reveals its limitations. Image P3040019 on the Samples Page best illustrates how much of the edges of an image get distorted when shot at full wide angle. It looks to me like little more than the center third of the frame is truly sharp.

The camera offers a modest amount of low-light sensitivity, with a maximum ISO of 6400. But I didn't have to push it very far to see artifacts. In fact, I could see digital noise in shots taken indoors at only ISO 200, without a flash. In general, photos taken in low light tended to suffer from a fair amount of digital noise and some textures looked smeared or splotchy. The same was true of video, which suffered from dancing pixels in low light. The usability of the built-in flash is limited in low-light situations. The online specifications for this camera don't mention a range, but I noticed a drop off at roughly 10 feet, which limits its use to only very near subjects. And, with that faint amount of light, I did not find its illumination particularly flattering in portraits.

Burst shooting at full resolution is not fantastic. The camera shoots at a modest 2.9fps in regular burst mode. There is a secondary burst mode that records at 7.8fps at full resolution, but it is limited to recording just seven frames. If you are willing to limit your resolution to 2.8 megapixels, the high-speed burst modes will certainly thrill you. High-speed burst 1 recorded at 22.2fps in my testing, and high-speed burst 2 recorded at 66.7fps. Both modes record up to 60 frames. But, again, that's a big step down in resolution. The same is true of the high-speed video modes. While recording at 240fps is a thrill ride, the camera records the video at 640x360; when recording at 120fps, the resolution is 854x480.

Playback mode is arguably the least sexy item on this camera. For starters, you cannot apply any of the attractive filters or picture modes to a photograph as an edit. The same is true of videos; the only thing you can do to them is trim off the beginning or end. Viewing photos and videos is enjoyable; the LCD has a high resolution and is quite bright. Navigating through your files, however, is a little cumbersome. You must use the four-way control, which does not offer a thumb dial. There is only one index view, offering 20 thumbnails. So, you cannot increase the number of thumbnails in order to page through your images more quickly. But you can page through your images in one click because the cursor jumps to the top row of a new page when you're scrolling upward, or to the bottom row of a new page when scrolling downward. It's not elegant, but the best you can expect with no dial at your fingertips.

Wi-Fi setup was easy. To connect the camera to my Android phone, I took a picture of a QR code displayed on the camera's LCD. Using the Image Share app on an iOS or Android phone, you can transfer photos and videos to your phone. The app also provides live view from the camera lens and basic remote control functions.

The battery life specification of 300 photographs is modest. But in my testing the camera performed much better. I was able to record 645 photos and 14 short videos on one battery charge. I did a moderate amount of burst shooting, and was not using the GPS or Wi-Fi, which would have drained the battery faster. If you want to charge the Li-ion battery in an external charger, you'll have to pick up that accessory. As is, with only a USB cable and AC adapter in the box, you have to charge the battery in the camera. Speaking of Wi-Fi,

Also in the box is a disk including the company's Viewer 3 program (Windows and Mac) for importing and viewing your files. The disk also includes a PDF instruction manual, which I found lacking in detail and difficult to navigate because of a very abbreviated table of contents. I often had to simply do word searches in an attempt to learn about a feature. For example, the manual does not mention the actual resolutions of high-speed videos. Nor does it explain lower frame rates of videos recorded with certain filters and effects that make the action look jerky. Nor was it written or edited by a native English speaker, and so was sometimes unclear in its explanations.

Bottom line - This Olympus Tough model offers a lot for the sports enthusiast looking to capture fast action in tough environments. High-speed burst modes, interval shooting, high-speed video and HD video at 60fps, are all exciting features, not to mention the hinged LCD. The tradeoffs for toughness, however, are a modest zoom, weak flash, and mediocre low-light performance, which make this camera less than ideal for an everyday go-to camera.