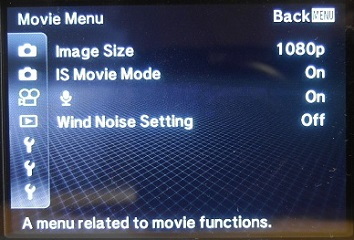 Please excuse the poor quality of these screen captures. The TG-830 kit does not include an AV output cable, therefore we had to photograph the display screen.

In the TG-830's automatic shooting mode, Olympus has chosen to include quite a bit of data on the screen. You'll see the mode in the upper left corner and the remaining battery charge and remaining space on the SD card in the lower left corner.
The upper right corner shows the popup menu icons, including the flash mode, self-timer, resolution, and aspect ratio. In the lower right corner the screen includes the movie resolution and the amount of video recording time remaining on the memory card.
When you press the Info button (which is the upper portion of the four-way button), you'll change the look of the screen to include a 3-by-3 grid and a histogram in the lower left corner. Press Info again to remove all data from the screen.
When you prefocus on the scene by pressing the shutter button halfway, you'll see a green focusing bracket, along with the current shooting mode in the upper left corner and the shutter speed and aperture setting along the bottom of the screen.
The shooting screen in Program mode looks pretty similar to what you'd see in automatic mode, although a few popup menu icons are added, including the exposure value, white balance setting, ISO setting, and burst shooting modes.
The popup menu is the fastest and easiest way to make changes to the camera's shooting settings. Just press the left side of the four-way button to activate the icons in the popup menu. Once one of the menu commands is activated, you'll see a longer bar appear along the right side of the LCD screen, and a brief explanation may appear along the bottom of the screen, which can be helpful for beginning-level photographers. You can scroll through the options using the left and right buttons on the four-way button.
In Program mode the popup menu options are:
As you turn the mode dial, you'll see a brief explanation of each mode appear on the screen. The mode dial options are:
If you like shooting photos with some fun special effects, select Magic Filter on the mode dial. The 11 different special effects you can select with the TG-830 iHS are:
The flash modes available with the waterproof TG-830 iHS include an LED On mode, which allows you to activate the camera's LED light, which is located next to the built-in flash. You also can activate the LED through the setup menu.
The LED will provide an extra illumination light to help you and the camera frame the scene in low light conditions, such as you may find underwater. Once you've activated LED On mode, the LED will illuminate whenever you press the shutter button halfway, as you would when prefocusing. When you press the shutter button fully, the TG-830 will turn off the LED and activate the flash in this LED On mode.
The flash modes are: Auto, Redeye, Fill In, Flash Off, and LED On.
Olympus has also included a built-in GPS unit with the TG-830, which you can activate through the third page of the setup menu. Once the GPS is on, you can see the GPS data screen by pressing the Info button on the upper part of the four-way button, scrolling through the options until the GPS data screen is active.
This screen shows an e-compass feature that indicates in which direction the camera is aimed, as well as the current time, date, latitude, and longitude. To include other data on the screen, just select the options through the GPS Settings menu.
You can make changes to the camera's many menus by pressing the Menu button on the back of the camera. Some of the menu options will be grayed out, depending on which shooting mode you've picked on the mode dial. When you open the menu screen, you'll see icons along the left side of the screen indicating the different types of menus that are available , including Camera (which is the shooting menu and marked with a camera icon), Movie (movie camera icon), Playback (play button icon), and Setup (wrench icon). Some types of menus include more than one page of options.
The Camera menu options include:
The Setup menu options include:
The movie recording screen that Olympus included with the TG-830 iHS looks a lot like the still image screen we discussed earlier. You'll see the movie mode in the upper left corner and the battery charge icon in the lower left corner. The popup menu icons are in the upper right corner, while the amount of available video recording time remaining on the memory card is shown in the lower right corner.
When you press the movie recording button on the far right of the top panel of the camera, you'll see a Rec icon appear along the bottom center of the screen. If you've turned the mode dial to Photo with Video Clip, you'll be able to shoot still images while recording movies. The image you just recorded will appear in a white box in the lower left corner.
Pressing the Info button at the top of the four-way button will change the type of data that's displayed on the screen while preparing to shoot movies, as shown here.
Olympus didn't include a lot of movie control options in the Movie menu: