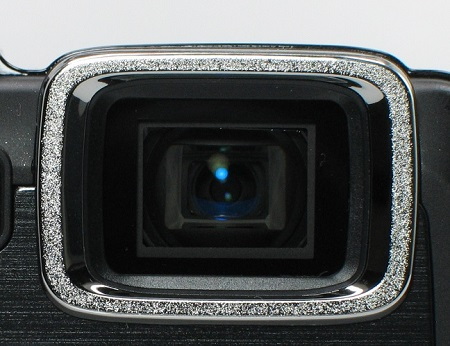 The biggest danger to the integrity of a waterproof camera case is the areas where the case opens to allow access to the battery compartment and the I/O ports. Olympus has included two compartments with the TG-830 iHS, both of which feature a double-locking mechanism to protect the camera's interior components from any leakage of water.
The lock on the bottom panel of the camera (shown on the left) protects the USB and HDMI ports. First slide the switch on the bottom side of the "L" to the right and then slide the switch on the upper part of the "L" downward to open the compartment. When the switches are open, you'll see an orange colored background; when the switches are locked, the background will be black.
The lock on the right-hand panel of the camera (shown in the right image above) protects the battery and memory card compartment. To open the compartment you first twist the silver lock to the left and then slide the black switch downward.
To lock both compartments, you just reverse the order in which you activated the switches.

The TG-830 iHS includes both a USB port and an HDMI port behind the locked compartment on the bottom of the camera. This camera can shoot movies at a full HD resolution, so the inclusion of an HDMI port is a good touch, especially for a camera in this price range.

Unlike many cameras on the market right now, the TG-830 iHS has the memory card and battery slots in the right-hand compartment of the camera. Most cameras use the bottom panel compartment to store the memory card and battery.
This camera can use any type of SD memory card. The TG-830's battery is a good size, and Olympus estimates that the camera can record up to 300 photos on a single charge. My tests showed that number to be pretty high, maybe 15% to 25% above what you could expect under normal working conditions. The battery will drain more quickly if you use the LED illumination light or the GPS unit more often.
Unfortunately Olympus didn't choose to include a separate battery charger with this camera, which means the only way to charge the battery is through a USB connection between the adapter and the camera. This means that you can't use the camera with one battery while a second battery is charging. If you choose to use two batteries, they'd both have to be fully charged before you start your long photography session.
The TG-830 has a very solid feel, which is what you'd expect with a tough, waterproof camera. Olympus has included several tough features with this camera, including: