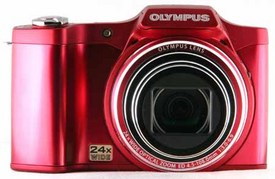 The Olympus SZ-12 is a 14-megapixel point-n-shoot camera with a very powerful 24x zoom lens (25mm - 600mm equivalent). This range is very flexible, allowing you to capture a very wide angle at one end (great for broad landscapes, for example), and use the powerful zoom to close in on distant subjects. Beyond this feature (very important, no doubt), the SZ-12 is a pretty basic camera. You get a typical assortment of shooting modes, basic editing options, and features.

Perhaps the most sophisticated feature is the sensor-shift technology that combats camera shake. That is, with a zoom lens that powerful, using a lot of magnification can result in a blurry picture. To minimize blur, the SZ-12 moves its sensor and adjusts both its ISO and shutter speed. Even so, it's not quite enough to deliver ultra-sharp images at the high end of its zoom, even in daylight. The images I shot looked good enough, but don't expect razor-sharp details when shooting handheld. We highly recommend you pick up a quality monopod or tripod for use with the SZ-12's powerful telephoto capabilities.

A common drawback of powerful zoom lenses is the distortion or vignetting that appear at the wide and telephoto ends of the zoom. But kudos to the SZ-12: The lens performed quite well at the extremes. When zoomed in to roughly 300mm in bright sunlight, the camera produced usable shots, although the edges of my subjects looked a little soft. And even at 600mm, I shot landscape details that looked good, though edges weren't exactly crisp. (Again, keep in mind these shots were taken handheld.) Better yet, even when my subjects were backlit, the camera usually optimized the exposure so that their faces were well exposed. However, shadow areas did suffer from some digital noise. On the downside, the shadow compensation made shadows on people's faces a reddish cast (a good indication that a fill-in flash would have been a good idea).

When taking wide-angle shots at 25mm, noise and distortion show up at the edges. One landscape shot on the samples page (P6250113) is a good example: the horizon line is blurry at the edges, and the grass in the foreground shows blurring and possible chroma distortion.

Overall, the SZ-12 produced accurate exposures most of the time. For example, even when taking pictures on a bright sunny day with clouds casting dark shadows, the camera tended to adjust well to the high contrast. The exception was the previously mentioned reddish cast on faces. However, shooting indoors without the flash was disappointing. In iAuto mode without flash, the camera shot at ISO 400 and often captured blurry photos. To prevent this, you can increase the light sensitivity to ISO 800 or ISO 1600, or use the high ISO setting so the camera selects the ISO itself. To help freeze the action, the SZ-12 can use an aperture as wide as f3.0 (wide). The downside of higher ISO settings, of course, is digital noise; you can see this in the series of images using ISO 800 - ISO 1600 on the samples page.

The easiest remedy for blur when shooting close subjects is, of course, to use the flash, which you flip up using a button beside the lens barrel. I like this design that the shooter rather than the camera decides when to employ the flash. This way, you see if the camera can capture a good shot with only available light (which is usually my preference). Once you pop up the flash, the LCD changes the flash icon from "no flash" to the selected setting: off, auto, redeye, or fill-in.

Autofocus on the SZ-12 is something of a mixed bag. There are three modes: face/iESP, spot, and AF tracking. Face/iESP usually detected faces, but not always. I sometimes got photos with slightly blurred faces and a sharp background. Similarly, AF track was good but not perfect: It usually kept a lock on a moving subject, but when I panned the camera to re-frame my shot, it sometimes failed to keep track of my stationary subject.

With macro subjects, the Autofocus worked poorly, ruining a fair number of shots. It often failed to distinguish between my close-up subject (usually a flower or wild grass) and a distant background. Even when the AF box indicated focus was locked on, I sometimes found that my the flower looked blurry while the background looked sharp (as noted before of people shots). I found myself getting into the habit of shooting multiple frames in macro to guarantee I'd get a sharp shot; it made me wish the camera had manual focus. Image P6250090 on the samples page shows how a field of wild grass in a light breeze proved tough for the camera to decipher, though this is admittedly a difficult subject to detect. Even when shooting landscapes, the focus had trouble. The AF box would sometimes blink red when filled with sky instead of land, even when I'd reposition it so the contrast of cloud edges were included to help it out.

If you feel the need for speed, this camera will frustrate. At full resolution, burst mode is maddeningly slow. However, you do get high-speed shooting - but you have to live with low-resolution shots. Traditional burst mode with flash takes a mind-altering 6.3 seconds to recharge and take another shot. Shooting without flash, the camera quickens to 1.3 seconds between shots. Even so, this amounts to less than one frame per second - not much of a burst.

The camera offers two high-speed burst modes: High-speed 1 takes 5-megapixel shots at 5 frames per second. High-speed 2 records 3-megapixel images at a blistering 11fps. With that kind of speed available, it's interesting that the sports scene mode does not use continuous shooting. Also, the flash is disabled in both high-speed shooting modes. While they offer lower resolution, both settings still give you a large enough image with plenty of detail to create average sized prints (4x6 to 8x10 inches).

The camera offers 16 scene modes and 10 digital filters, including a 3D mode. (The LCD does not display 3D, however - you will need a 3D screen to see the effect). In addition to standard scene modes such as portrait, indoor, night scene, and fireworks, is the novelty of the Beauty setting. This mode touches up wrinkles and smile lines and, like similarly priced point-and-shoots, tends to make faces look waxy and airbrushed.

One advantage of this feature is that it is both a scene mode and a feature you can apply later via the editing menu. And, there are three available settings: clear skin, sparkle eye, and dramatic eye. Clear skin has three levels of intensity: soft, average, and hard. I found that using "soft" produced a less cartoonish effect than "hard". Sparkle eye did not produce a visible effect to my eye (pun intended), even when I blew up the image on the LCD. Dramatic eye did make my eyes slightly bigger, but the difference was minimal. When applying these edits, the camera displays the original image and the edited version side by side on the LCD.

Only two additional adjustments are offered in the edit menu: shadow adjustment and redeye fix. These, of course, are important photo edits to make. But note that magic filters have to be selected before you take a shot - they can't be applied as an effect in editing mode.

Panorama mode has two options for shooting a panorama and having the camera stitch it together. Auto mode displays a pointer and a target mark; once you've lined them up the camera automatically takes the picture. In manual mode, you press the shutter button yourself after overlapping a semi-transparent portion of the previous shot with your next shot. In bright sunlight, however, seeing this semi-transparent image accurately enough to line up my next shot was a little difficult. Both panorama modes combine three frames into a panorama with a size limit of 2 MB, which I found to have enough resolution to enjoy on a large computer monitor. In addition there is PC mode, which allows you to shoot more than three frames and doesn't impose a file size limitation. You can take up to 10 shots in PC mode and, as the name suggests, combine them together later on your computer. (Panorama stitching software is included on the CD-ROM, for Windows only).

The combination four-way control/thumb wheel is small, yet quite convenient for the most part. It is small, which limits its ease of use, and on occasion you will likely push it unintentionally while scrolling and make an unwanted selection. The dedicated movie button, playback button and menu buttons are spaced far enough apart that they're not too crowded, despite their small size. At the bottom is the dedicated help button, which offers explanations of menu options and during shooting mode offers helpful photography tips and camera information.

The thumb wheel is best enjoyed using the photo surfing mode, which displays a ribbon of scrolling images below the selected image, with basic camera setting information in a column on the left. I only wish this view was selectable by pressing "info" when in playback. As it is, you have to go to the playback menu to turn it on, and while in it you cannot use the zoom to launch index view or magnify an image.

This bargain camera produces high quality movies for its class. Shooting at 720p, the video I recorded was well exposed and looked fairly smooth. There is an HDMI port for playing video on a TV, though an HDMI cable is not included. You can use the zoom during video recording and the autofocus will adjust to keep your subject in focus, though the focus proved a little slow to lock on to my subjects after zooming.

To charge the camera's Li-ion battery, you leave it in the camera and connect the camera to the charger with the included USB cable. The drawback of this design is you can't continue shooting with a backup battery while charging the dead one. Olympus doesn't publish any battery life rating for this camera. But during my testing, I shot 205 photos and half a dozen 30-second videos before the camera flashed its low battery warning. Keep in mind that this was the factory charge, and may not have been a full charge.

Bottom line - For a point-n-shoot selling for less than $200, the SZ-12 offers a very powerful zoom lens, accurate exposures, and a high-resolution LCD. It's a good deal, even considering that autofocus isn't quick, burst mode is slow at full resolution, and indoor shooting in iAuto mode isn't ideal. If these limitations don't deter you, you'll enjoy the thrill of the SZ-12 and its powerful 24x zoom.