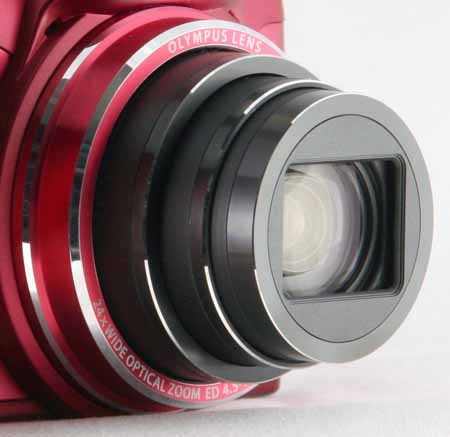 The SZ-12 boasts a powerful 24x telescoping lens (25 - 600mm equivalent), which gives you both a generous wide angle and very powerful zoom. The lens retracts into the body, and a built-in curtain protects the lens.

The focus ranges are:


Olympus does not publish the range of the built-in flash, but I found that it casts a good amount of light for its size. Interestingly, you choose whether you want to shoot with flash, even in iAuto mode - it doesn't pop up automatically. Rather, a button on the lens barrel pops up the spring-loaded flash.


This angle gives you an idea of the contours of the camera's small hand grip, which eases one-handed operation compared to a flat body design.


The 460,000-dot resolution of the LCD is a good deal for a sub-$200 camera, providing adequate brightness in most situations, attractive color saturation and details crisp enough to accurately inspect a magnified photo for sharp focus.


At the top is the dedicated movie recording button for capturing high-definition 720p video, followed by the playback button, menu button, and four-way control/thumb wheel. At bottom is the help button, which launches explanations and definitions of menu items, and in shooting mode offers helpful tips and camera tutorials.

The four-way control doubles as a thumb wheel, which is very convenient when scrolling through menus or gliding through a series of images in photo surf mode. The four-way control and buttons are well placed for a camera of this size - far enough apart that their proximity to other controls doesn't trip up operation.


At top right, the shutter button sits atop the hand grip, surrounded by the zoom ring. At this angle, notice the depth of the hand grip - deep enough to provide a good handle without being bulky. At left you can see the button beside the lens barrel that pops up the spring-loaded flash.


The SZ-12 has two ports, which sit behind a plastic flap: a multi-terminal (USB and A/V output) port and an HDMI Type D output. A USB cable is included, while an AV or HDMI cable is optional.


The camera accepts SD, SDHC and SDXC memory cards. The card slot sits next to the battery compartment on the underside of the hand grip. In addition there is 59MB of internal memory, however that won't get you far. We recommend a fast (Class 4 or better) SDHC card of at least 4GB, which will give you plenty room for photos and videos, while still being quite affordable (UHS speed class is not supported).

The camera runs on a Li-ion battery, and comes with a charger, which you connect to the camera with the included USB cable. Olympus does not claim a battery life on their website or in the manual. Being that the battery charges in-camera, it can be difficult to charge a spare pack since the camera is required to recharge the battery. We still recommend you pick up a spare battery if the budget allows, as the battery may not get you through a full day of shooting; depending on your shooting habits.