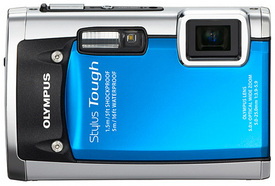 The second Olympus "lifeproof" model for 2010, the Stylus Tough 6020 is a compact camera designed for those who are looking for a rugged camera to keep with them at all times, no matter what the environment might be. This unit is basically a toned down Stylus Tough 8010, which is their top-of-the-line "Tough" camera for this year (as of 9/2010). The main differences between the two are the 8010 offers increased "toughness" with greater proof ratings, a slightly different body design, and about twice the amount of internal memory. Other than that, the 8010 and 6020 share almost identical internal makeup. This includes 14-megapixels of resolution, a internal 5x optical zoom lens, Dual IS system, 2.7-inch LCD screen, iAuto, 720p HD video recording, Magic filters, a locking mechanism on the "port" door, etc.
While not quite as rugged as the 8010, the 6020 is no slouch. This model is still waterproof to depths of up to 16ft, dustproof, shockproof from falls of up to 5ft, and Freezeproof in temperatures as low as 14°F. However, it seems the 6020 does lose the crushproof rating found on it's sibling. In order to make this model water tight, Olympus uses a system of rubber gaskets and seals around the controls and the base of the compartment door. The lens is also completely contained inside the body. The new lock feature on these models makes it much harder to accidentally open the port door, keeping the camera safe. All of these features combined allow you to take the 6020 with you just about anywhere; which is prefect for those who live an active or adventurous lifestyle.
Build quality is comparable to past models. The 6020 doesn't have that "tank" like feel that some of the older Tough cameras have had, however it still feels well built. I think this is attributed to the fact that the frame is mostly plastic, compared to metal. The controls are spread out well across the back and top of the camera, however I personally wish they would have left the zoom control mounted around the shutter release like found on the 8010; again, this is just personal preference. Handling and operating the 6020 is a breeze with one or two hands, with only one real downfall; the GUI (Graphical User Interface). The interface on the 6020 is very slow. Navigating the Quick menu is delayed, as is most of the other options (like playback, etc.) This made it very frustrating to operate at times when wanting to quickly make adjustments to settings or change exposure modes. Another issue I had was with the memory system. No matter what exposure program I was using before powering the camera down, it would always default back to Program mode when powered back on. This isn't a huge problem, however iAuto would have been a better choice since this is the mode I feel will be used the most by the typical consumer; as it produced the best results during our tests.

One unique feature on these Tough cameras is Tap Control, which allows you to change settings like the flash and shadow adjust simply by tapping on the top, sides or back of the camera. This is perfect for situations when you may have trouble pressing or recognizing buttons on the camera (e.g. underwater, when wearing gloves, etc.). The 6020's 2.7-inch, 230,000 dot HyperCrystal III LCD screen worked well during our tests. The surface is not too reflective, so when shooting outdoors you should have no problems keeping your eyes on the subject. This is also thanks to a nice bright backlight, which offers 5 brightness settings.
When it comes to image quality, the 6020 can deliver some pleasing photos. While the exposure system did have some problems in bright sunlight where it produced some overexposed photos, the majority of our sample photos look great. Images a sharp and show vivid colors. iAuto seems to produce the most pleasing results, so you'll have to remember to switch to this mode when you turn the camera on; as we mentioned earlier, the 6020 always defaults back to Program mode. On our sample photos page you can see some examples where we captured photos using both iAuto and Program mode, then put them side by side.

The 6020 also handles noise well, producing very nice photos up to about ISO 400. While the ISO 800 setting is still very usable, I feel you'll capture the best photos by keeping the sensitivity set to ISO 400 or below. The maximum setting of ISO 1600 doesn't look to terribly bad, however I recommend using this option only when in a bind where capturing the photo is more important than its quality.

The 5x optical zoom Olympus included on the 6020 is a nice addition, offering a much broader zoom range than past models that were equipped with a 3.6x zoom. Favoring the wide end, this unit provided a nice focal range that will allow you to capture pleasing photos indoors, underwater, and when on vacation. The 140mm telephoto end won't zoom in tight on a distant object, but does offer enough magnification to help you frame close-up photos, portraits, etc. You'll notice typical amounts of barrel distortion in photos taken at full wide angle, along with some edge softness and slight traces of purple fringing along areas of extreme contrast.

When shooting photos of friends and family, the 6020's Face Detection AF mode is able to quickly find and lock onto faces within the frame. The flash is quite week, so you'll want to make sure your subject is no more than about 6 feet away in order to ensure you get a decent exposure. We used the flash for fill outdoors, which produced pleasing results with subjects no more than 6-7 feet away.

Recording video with the Stylus Tough 6020 is as simple as it gets with the dedicated movie mode shutter release. No matter what still shooting mode you are currently using, you can start capturing 720p HD or standard definition movies with the press of one button. First off, you will need to half-press the shutter release to focus before you start shooting, as the camera will start to record when the button is pressed, whether it is in focus or not. Overall video quality is average for a consumer model. Video is relatively clear with typical amounts of noise or artifacts present. The exposure system does not like bright light at all, and we did see some vertical banding (purple lines that show up over areas or objects of extreme brightness). The optical zoom is operational while recording, and you only hear a light hum from the zoom mechanism. The zooming speed is locked to a very slow rate, which helps keep the noise down. The microphone on the 6020 picks up all kinds of background noise, not to mention every touch to the camera body and press of any buttons. In our movie sample, you can hear examples of this.
Battery life is not the greatest. The 3.7V, 925mAh Li-Ion battery pack is only rated for 200 shots on a single charge, and that's about all you'll be lucky to get. I captured about 130 photos and about a dozen short video clips before the battery was depleted. This did include some prolonged use of the menu and playback systems, however I had to recharge the battery in order to finish up our tests. We highly recommend you pick up a second battery pack (about $45 US), and if your budget allows the LI-50C external battery charger (also about $45 US). Since the battery is normally charged in-camera, this external unit would allow you to charge a spare while you're using another.
Bottom Line - Olympus continues to produce their popular Stylus Tough cameras for the active or adventurous consumer. These models offers durability that has been acquired by only a handful of manufactures until recently. Now, just about all of the major players offer a rugged, "lifeproof" camera line. That said, the 6020 is a bit of a mixed bag. While I was pleased with the camera's image quality output, specifications list, and overall exposure mode offerings, its below average shooting performance and sluggish GUI really drag the camera down. With a street price of $299 US, the 6020 is at a price point where you have various alternative models that out perform this camera in several areas. If you're in the market for a rugged compact camera like the Stylus Tough 6020, be sure to check out some of its competition as well before making your final purchase: Olympus Stylus Tough 8000, Panasonic Lumix TS1, Pentax Optio W90, Casio Exilim EX-G1, Canon PowerShot D10, Sony Cyber-Shot DSC-TX5, etc.