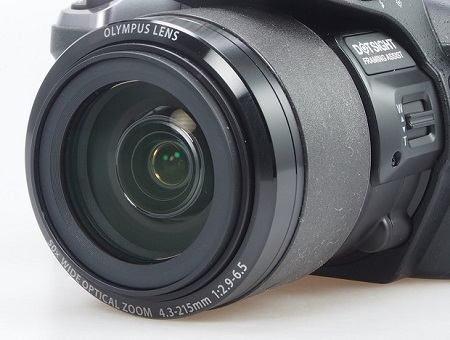 The Olympus SP-100 includes a small 1/2.3-inch image sensor with 16 megapixels of resolution. Although the SP-100's image quality is pretty good, this camera cannot match the images that most cameras with larger image sensors can achieve. Considering the SP-100 has a starting price around $400, it's unfortunate this camera has an image sensor that's similar in size to what's found on much less expensive models.
This ultra-zoom model has a 50x optical zoom lens (24 - 1200 mm focal length equivalent). Consequently, this is a big camera, measuring 5.2 inches in depth when powered down, but when the full 50x telephoto is employed, the camera's depth is 8 inches. In other words don't expect to carry the SP-100 in a pocket and don't expect to be able to use this camera one-handed. Using a tripod most of the time is advisable.
You can move through the entire 50x zoom range in about 4 seconds. The SP-100's lens doesn't move through its range as fast as some other big zoom lenses, partly because there are more than 50 specific focal lengths available with this lens. You can really dial in the exact focal length level you want with the precision that this zoom lens offers.
As expected the camera's minimum aperture changes quite a bit, depending on whether you're using it at a wide angle or telephoto setting. At full wide angle you can shoot at an aperture as wide open as f/2.9, but you'll be limited to f/6.5 at full telephoto. This discrepancy greatly affects the camera's ability to shoot in Aperture Priority mode. You can't pick just any f-stop setting in Aperture Priority mode, and you'll have to pick from two or three pre-selected f-stops that the SP-100 offers. This issue greatly limits the usability of Aperture Priority mode.
The autofocus range for the SP-100 is:
This model uses lens-shift image stabilization.

When you press the popup flash button, you'll see the flash unit extend a little more than an inch away from the camera body. It's important to have plenty of clearance over the large zoom lens to avoid problems with vignetting. The flash also needs some clearance to make room for the Dot Sight mechanism.
The flash modes available with this Olympus camera are: Auto, Red-Eye Reduction, Fill-in, and Off. The flash does not pop up automatically when needed, so when shooting with the flash unit closed, the flash mode will always appear as Off. You must open the flash manually to see the available flash modes in the menus.

The SP-100's popup flash isn't your typical flash unit. When you press the Dot Sight toggle switch, a black plastic door on the flash unit will slide out of the way and Dot Sight window will pop into place just below the flash, giving you the ability to look through the flash unit.
You can use the camera's on-screen menus to allow the flash to be active or to be set automatically to Off when the Dot Sight is activated.

These photos show the Dot Sight window as you'd see it when looking from the back of the camera. The photo on the left shows the overall view of the Dot Sight, while the photo on the right has been purposefully darkened so you can more clearly see the actual red reticle that's visible in the Dot Sight window. (When testing the Dot Sight, I found that the red target was easy to see in all types of external lighting, including bright sunlight, so the photo on the left doesn't quite show the true clarity of the Dot Sight's reticle.)
Although the model name typically is shortened, the official name of this camera is the SP-100EE, where the EE is short for Eagle Eye. The Dot Sight mechanism gives the SP-100 its Eagle Eye designation. This mechanism aims to be similar to something you'd see on a rifle, where a dot sight can help you keep an object far in the distance aligned properly.
If you've used an ultra-zoom camera in the past, you probably have had an experience where you've been using the full telephoto setting but have lost sight of the subject because of the narrow field of view that's visible in the LCD screen or in the viewfinder. The Dot Sight mechanism on the SP-100 allows you to more easily find the subject again and properly line up the photo without having to zoom out of the scene.
Just look through the Dot Sight window to line up the Dot Sight red target on the subject. Because the Dot Sight is not connected to the lens in any way and uses no telephoto capability, it's easier to find the subject with the Dot Sight's wide angle view. Once the subject is found with the Dot Sight, you then can recompose the scene using the LCD or electronic viewfinder, because the subject should again be visible in the scene, even if you're still at the full telephoto setting.
More commonly you'll probably use Dot Sight to follow a moving subject that you're photographing with a full telephoto scene. It works well for this type of work, as long as you closely dial in the accuracy of the red target using the Dot Sight adjustment knob just to the right of the viewfinder (which is not visible in the photos above).
The Olympus SP-100's Dot Sight certainly isn't going to be as accurate as the dot sight on a rifle -- the "point of aim" with the Dot Sight's red reicle doesn't match the "point of impact" perfectly. But it will at least give you an approximation of the location of the subject in your zoomed-in scene. In the SP-100 user manual Olympus says the Dot Sight should only be used as a "guide" for framing, and that you'll have to re-confirm the composition using the EVF or LCD after using the Dot Sight.
Additionally, if you are trying to look through the Dot Sight window at an angle, you may have a hard time seeing the red Dot Sight target mark. Even though it isn't perfect, the Dot Sight does its job as advertised most of the time.
The Olympus SP-100 has a large right-hand grip, which is important for helping you hold this large-zoom camera comfortably. On the top panel of this camera you'll see the shutter button at the far end of the hand grip. The shutter button is surrounded by the primary zoom ring.
The power button is just below the shutter button, and it lights up blue when you press it. While the shutter button is of a large size, making it easy to find and press when you're in a hurry, the power button is too small and is set very tight to the camera body, making it difficult to press in a hurry, which means you may miss some spontaneous photos.
The mode dial is in the lower left of this photo. The white line indicates the current mode setting. The mode dial doesn't securely click in place when a mode is selected, which means you may inadvertently skip past the mode you really want from time to time. The mode dial options are:
To the right of the mode dial is a command dial that allows you to scroll through menu options or stored images more quickly. You'll also use the command dial to make changes to the aperture in Aperture Priority mode or the shutter speed in Shutter Priority mode.

Olympus included an average quality LCD screen with the SP-100. It measures 3 inches diagonally and includes 460,000 pixels of resolution in a 4:3 aspect ratio. You will notice some significant glare problems with this screen. And even though it has no touch screen or tilting capabilities, it does seem to collect fingerprints more easily than I'd like to see.

An electronic viewfinder is a key component for an ultra zoom camera, as it will be easier to keep the camera steady when hand holding it with a viewfinder than when trying to frame the scene using the LCD screen. The EVF has 920,000 pixels of resolution, and it is of an average quality. You can adjust the sharpness of the viewfinder using the diopter adjustment dial, which is just to the left of the viewfinder (and not visible in this photo).
The EVF doesn't turn on automatically as you lift the SP-100 to your eye, which is disappointing. You have to press the monitor button (marked with two vertical lines surrounding an oval) to switch the view from the LCD to the EVF and back. The Fn button on the far right can be set to any of more than a dozen camera commands.
The dial just to the right of the viewfinder is the Dot Sight adjustment dial that I mentioned earlier, which you can use to ensure that the Dot Sight is properly aligned to the current focal length.

Additional control buttons for the Olympus SP-100 are located on the right side of the back panel.
Along the top are the Playback button on the left and the movie recording button on the right. You can see your stored images using the Playback button, while you can start and stop video recording by pressing the movie button.
In the middle is the four-way button. As with many Olympus cameras the labels on the four-way button are engraved rather than clearly marked, which makes it difficult to see the labels in dim lighting. The top of the four-way button controls EV, the right side controls the flash, and the bottom controls sequential shooting, the self-timer, and the delete function in Playback mode. The left portion of the four-way button has no camera function associated with it.
You'll use the four-way button to scroll through stored images and to navigate through the SP-100's on-screen menus. Press the OK button in the middle of the four-way button to make selections or to open the popup menu on the shooting screens.
Along the bottom of the back right panel you'll see the Menu button, through which you can open any of the on-screen menus. The Info button allows you to change the data that's displayed on the screen either in a shooting mode or in Playback mode. As you use this button to make changes to the information displayed on the LCD screen, the same changes will be made in the EVF.

The right side of the SP-100EE body has the I/O ports inside a compartment. The USB port is at the top, while an HDMI micro port is below it. The compartment is protected by a soft door with a hinge that pops into place.
.


It's a little surprising that Olympus didn't include a larger battery with the SP-100, especially considering this model has a large body. However the SP-100 has a relatively thin rechargeable battery. Olympus estimates the SP-100's battery will last for 330 shots, but you'll only achieve that level of performance if you're using the viewfinder more often than the LCD to frame photos and you don't move the zoom lens back and forth a lot. Realistically you can expect 200 to 240 photos per battery charge under a typical usage pattern.
You'll charge the battery inside the camera using the included USB cable.
The memory card slot is in the same compartment as the battery, and the compartment is protected by a hard plastic door with a spring hinge that locks in place with a switch. The hinge has a little looseness to it, so you'll want to treat it carefully.