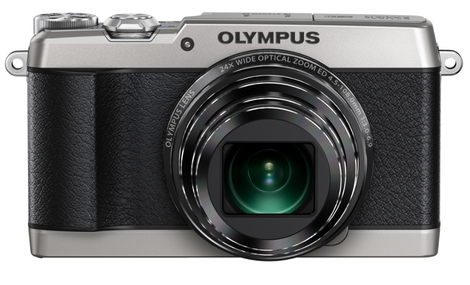 Designed to look like a member of the PEN interchangeable lens system cameras, Olympus has announced the Stylus SH-1 IS long zoom point-and-shoot. The SH-1 is the first compact camera with the optical 5-axis mechanical image stabilization, which was originally developed for the OM-D EM-5. It also boasts a 16MP BSI CMOS image sensor, the TruePic VII image processor (another hand-me-down from the OM-D series), a 24x optical zoom lens, and a 3.0-inch touchscreen LCD display that allows users to touch focus or control other camera parameters -- particularly helpful in Manual Mode.
The SH-1 also features 11 frames-per-second (fps) High-Speed Burst Shooting for action still shots, as well as an Advance Movie Mode that can shoot both Full HD video (1080/60p) as well as super smooth slow motion (VGA/240fps). Video recording benefits an electronic Hybrid Image Stabilization for shake-free home movies.
If you're interested in time-lapse photography, the SH-1 has not one, but two different ways to create them. The first is Time-Lapse Movie, which compresses up to five hours of footage into a 20 second movie. The second is a Interval Shooting Function, which can record up to 99 still images at a sequential interval of 1-second to 24-hours. Also, you'll enjoy knowing all your shots are level thanks to the built-in Electronic Level Gauge.. which you can then stylize by adding a few Art Filters, or show off in Photo Story.
Lastly, like many 2014 models, the SH-1 IS features built-in Wi-Fi. Not only can it access available, existing networks, but the camera can also create its own Wi-Fi network, which you sync with your smartphone by scanning a QR code displayed on the TG-3's LCD screen. To do this, all you need is the FREE Olympus Image Share app, available for Android or iOS. The app allows you to upload pics and videos to the web, and turns your smartphone's touch screen into a secondary (remote) camera display.
Olympus Stylus SH-1 IS Features
The Olympus Stylus SH-1 IS will be available in May (2014) -- in black, white, or silver -- with a $399.99 MSRP.