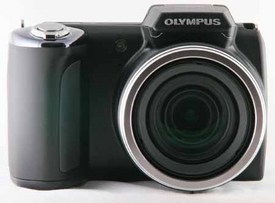 The Olympus SP-620UZ is a 16-megapixel point-and-shoot camera with SLR styling. The sturdy body sports a comfortable handgrip and a large-barrel 21x zoom lens (25mm - 525mm equivalent). The extent of the zoom range gives you a lot of flexibility. The 25mm wide angle is great for capturing a broad, sweeping landscape, while the powerful zoom can get you close to faraway subjects. Beyond the powerful wide zoom lens, this camera is pretty basic, offering a typical assortment of shooting modes, basic editing options, and features. The biggest hazard, of course, of having a 21x lens zoomed in all the way is a blurry photo. Thankfully the camera employs sensor-shift technology to combat shake. Though Olympus touts this technology as dual image stabilization, in truth it employs high ISO and shutter speed adjustments in addition to sensor shift to minimize blur, as opposed to the addition of optical anti-shake technology in the lens. Not that you would expect such sophistication in a sub-$200 camera.

A typical problem with powerful zoom lenses is what you get at the wide and telephoto ends of the zoom - often some form of distortion or vignetting. To the camera's credit, I found that when zoomed in to 525mm in bright sunlight, I got a usable shot, although the edges of my subjects looked a little soft. In addition, even when my subjects were backlit, the camera adjusted the exposure nicely so that their faces were well exposed, though digital noise was evident in shadow areas.

At the other end of the spectrum, distortion and noise is evident at the edges when shooting at 25mm. You can see this in one particular landscape shot on the samples page (P6240103) - the edges of the horizon are blurry at the edges, and the grass in the foreground shows blurring and possible chroma distortion.

As for exposure accuracy, the SP-620UZ performed well. Exposures tended to be accurate more often than not, even when dealing with the difficulty of high contrast on a sunny day with clouds casting dense shadows. Where the camera was most troublesome was indoors without using the flash. Using the iAuto mode without flash in low indoor light often produced blurry photos, which the camera shot at ISO 400. To combat this, the camera does allow you to bump up the light sensitivity to ISO 1600. There is also a high ISO setting; when using this the camera can use an aperture as wide as f3.0 (wide) to help capture a sharp shot. With higher ISO settings, however, comes digital noise, which you can see in the series of images on the samples page using ISO 80 - ISO 1600.

Of course, you can always use the flash, which you simply flip up on its hinge. There is no flash pop-up button, nor does the flash spring up automatically. You have to lift the flash, and once you do, the flash icon on the LCD changes from "no flash" to the selected setting: off, auto, redeye, or fill-in. At first this struck me as basic and unsophisticated, but not having to search for a flash pop-up button really is a convenience.

The camera offers three modes of autofocus: face/iESP, spot, and AF tracking. The face/iESP mode worked well at detecting faces, and AF track did keep a lock on moving subjects as well as stay focused on a stationary subject as I panned the camera to reframe a shot. But poor focus ruined a fair number of shots when failing to distinguish between a close-up subject and a distant background. Even when the AF box indicated focus was locked on, I sometimes found that my close-up subject was blurry and the background sharp. Taking multiple shots when shooting macro was the norm to make sure I got a photo with crisp details, and made me wish for manual focus. A sea of wild grass in a mild breeze (see image P6240080 on the samples page) proved tough for the camera to decipher. Surprisingly, even when shooting landscapes, the focus had trouble locking on when the AF box was filled with sky instead of land, even though there were clouds providing the contrast of edges to help it out.

When it comes to shooting speed, this camera is both extremely fast and frustratingly slow - depending on what you are doing. When shooting in traditional burst mode using the flash, the camera takes an agonizing 5.4 seconds to recharge the flash and take another photo. If you can get by without the flash, you will certainly do better and experience a 1.3-second delay between shots at full resolution. Still, this amounts to a sluggish burst of less than one frame per second.

The saving grace comes if you can live with lower resolution files. If so, you will be thrilled with the high-speed burst modes this camera offers. Two are available: High-speed 1 captures 5-megapixel files at a respectable 5 frames per second, while high-speed 2 mode records 3-megapixel images at a screaming 13fps. While these are lower resolution settings, both still offer plenty of detail to create typical sized prints. With that kind of speed available, I have to note here that it's interesting that the sports scene mode does not even employ continuous shooting. Also, note that you cannot use flash in either high-speed shooting mode.

You get a typical selection of 16 scene modes and 11 digital filters with this camera, including a 3D mode (though you will not see 3D on its LCD, which has a bare-bones resolution of 230,000 dots). Beyond the standard landscape, night scene, candle, and fireworks scene modes, you also get a Beauty setting. This mode blurs wrinkles and smile lines and, like other cameras in its class, makes faces look rubbery and airbrushed. Forgive me for thinking too highly of myself, but I didn't think it made me look more beautiful, just more like a candidate for a wax museum; though I can see how this gimmick might appeal.

On the plus side, this feature can be applied after the fact in the editing menu. There you get three settings to apply: clear skin (there's your target market), sparkle eye, and dramatic eye. The clear skin edit offers three levels of intensity. I didn't find the sparkle eye edit noticeable, though the dramatic eye setting distorted my eyes to make them look slightly bigger. When you apply this edit, a zoomed-in detail of the before and after shots appear side by side on the LCD. However, when these details were blown up, they looked so bitmapped that in most cases I could not see the difference between the two. Only two additional edits are offered: shadow adjustment and redeye fix. These, of course, are important photo edits to make. But the fun of magic filters has to be selected before you push the shutter button - you don't get to choose which filter to apply after the fact.

The camera's panorama mode works well and offers you two ways to shoot: In auto, you line up a target mark and the camera automatically takes the picture. In manual mode, you use a semi-transparent portion of the previous shot to overlap with your new shot and press the shutter button yourself. In bright sunlight, however, I found it difficult sometimes to identify and match up far-off details in a faded slice of the previous photo - perhaps in part due to the LCD screen's modest resolution. Both of these modes take three frames and combine them in a panorama, but the maximum size of the image is 2 MB. Even so, I found my landscape panoramas to be of high enough quality to enjoy on a large computer monitor. Alternatively, you can use the PC mode if you want to shoot more than three frames or don't want to be limited to 2MP. In PC mode you can shoot up to 10 frames and stitch them together later with computer software (stitching software included on CD-ROM, for Windows only).

The SLR styling of the SP-620UZ does not extend to its controls. Despite the inclusion of a thumb wheel, it is small. And because it doubles as the four-way controller, it can be difficult to spin it without accidentally pressing it and registering an unintended selection. Also, the playback and menu buttons are so close to the four-way thumb wheel that it's difficult to locate and press them if you don't have the most slender of fingers.

The dedicated movie button is convenient, and the thumb wheel definitely comes in handy for navigating the menus. In particular, I liked the photo surfing mode, which displays a ribbon of scrolling images below the selected image, with basic camera setting information in a column on the left. I only wish this view was selectable by pressing "info" when in playback. As it is, you have to go to the playback menu to turn it on, and while in it you cannot use the zoom to launch index view or magnify an image.

Movie quality is good for a bargain camera. The SP-620UZ captures 720p video, and has an HDMI port for playing it on a TV (HDMI cable not included). On the plus side, the autofocus readjusts to lock on to your subject. However, on the downside you can't use the zoom while recording video; you have to preset the desired focal length before you press the movie record button.

The camera runs on four AA batteries, which is convenient because they're available anywhere. This is particularly handy if you've already invested in a stash of rechargeable batteries; no need to buy a backup Li-ion battery in case the first one runs out of juice. The only downside I found is that the battery door had a tendency to stick a little from the pressure of the spring-loaded batteries (it doesn't simply pop open - you have to slide it across the battery terminals). And, if you're in the habit of turning over your camera to retrieve your SD card, you'll have to retrain yourself - otherwise you'll dump those four AA batteries on the floor every time.

Olympus doesn't publish any battery life rating for this camera, and of course it would vary with the type and quality of the batteries you use. But for what it's worth, my four rechargeable batteries (two 2450 mAh and two 1700 mAh) had not run out after snapping 210 shots. We highly recommend you pick up a set of NiMH cells as they typically last longer than Alkaline and Lithium cells, and will save you money in the long run thanks to being rechargeable.

Bottom line - The SP-620UZ performs well for a sub-$200 camera, and offers a powerful lens for a reasonable price. Despite its sophisticated appearance, it is a basic camera and does not offer quick focus, fast continuous shooting at full resolution, or a beautiful LCD. But if a powerful lens is all you need, you'll have fun going zoom zoom zoom.