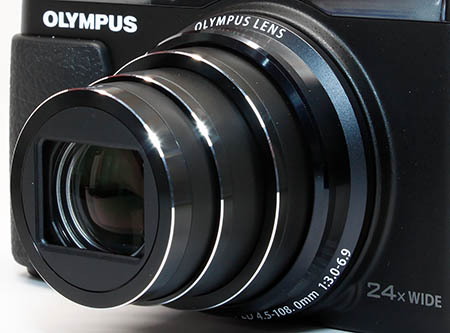 Adding the versatility to the SH-50 iHS is a 24x optical wide zoom lens with a 35mm equivalent of 25-600mm. This incredible range makes this the only camera that you will ever have to carry. Its 24x optical zoom lens is a much greater range than with any single lens that you will find on a dSLR. Assisting with the large zoom lens is Olympus's new Optical Image Stabilization system, which is the first to use a 3-axis system, compensating for vertical, horizontal and rotary shifts. It also works as a 5-axis system for video recording.
Focus Range:

Olympus's iHS technology is a combination of their 16-Megapixel Backside Illuminated CMOS imaging sensor and their TruePic VI processor, which work together to greatly reduce image noise, increase low-light performance and boost the AF system. It is also behind the camera's amazing Intelligent Auto and creative shooting modes.
On the left side of the camera is a compact manual pop-up flash unit. It operates in the basic flash modes, auto, on off and red-eye reduction. This compact unit is not very powerful, although Olympus notes a a range of up to 30.1f.t (W) at ISO 3200. This range sounds great, but when you lower the ISO to suitable levels, that range gets much smaller.
The top of the camera has been kept very simple. From left to right you can see the stereo microphone, power button, shutter release with optical zoom control and the mode dial.
The back of the camera is also incredibly simple and clean. with just a few controls, the camera relies mostly on the 3.0-inch touch LCD screen. On the back you will find the dedicated video recording button, 4-way controller, playback button and menu button. The 4-way controller acts as shortcuts to the flash and self-timer controls as well as changing the information on the LCD screen. The screen itself features several levels of brightness adjustment and anti-glare coatings which make it easy to see in all situations.

On the right side of the camera are the camera's two input/output ports, which are hidden under the HDMI door. On top is the high-speed USB port, used for charging the camera and transferring images from the camera to a computer or DPOF printer. On the bottom is the HDMI output port, allowing you to view your images and high definition movies on any HDTV. No HDMI cable is supplied with the camera.

Powering the SH-50 iHS is a 3.6V, 1270mAh rechargeable Li-Ion battery. Olympus claims that this battery is capable of capturing up to 300 images on a single charge. Olympus also includes the USB power adapter shown above, that allows you to charge the battery inside the camera.