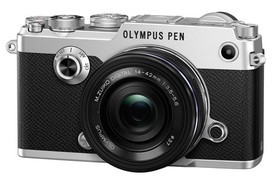 The latest big release from Olympus comes in the form of a PEN series camera with the PEN-F. This new Micro Four Thirds mount mirrorless ILC comes to you with the styling of an old rangefinder camera, offering a ton of image control right on the body. Sporting a 20-Megapixel Live MOS imaging sensor, TruePic VII processor, 5-axis image stabilization, 10fps burst shooting, WiFi, Full 1080p HD video capture and two great options for composing your images; the PEN-F has the power and capabilities for just about any shooting situation you may find yourself in.