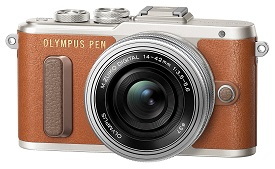 Beginning photographers considering making the jump from a smartphone may drag their feet because they feel like a dedicated digital camera just doesn't work for them -- the design is too different from the smartphone camera, or it'll take too long to learn to use.
Olympus' latest mirrorless interchangeable lens camera (ILC) may solve that problem. The PEN E-PL8 may not be quite as thin as a smartphone, but it offers some of the same operational principles, making it one of the easiest ILCs to use, and a strong contender for beginners.
You won't find a high-end resolution count with this camera, as it's limited to 16.1 megapixels. That's on the lower end of the scale for new ILCs. But most of those new to digital photography won't notice a problem, as the E-PL8's resolution and chip size are both larger than most smartphones. And, for what it's worth, 16.1-megapixels is plenty of resolution for most beginners.
Beginners will appreciate the speed with which the PL8 operates. You'll experience almost no shutter lag, and delays between shots are minimal. It can shoot up to 8.5 frames per second, so ou won't miss too many spontaneous shots.
The one big drawback for the Olympus PL8? It shares a lot of similarities with the PEN E-PL7, including:
At this point, you may be wondering how these cameras differ. They do look a little different from a physical standpoint. The older PL7 has a slightly larger grip on the right side of the front panel. And the PL8 has some new color choices. Outside of that, we could've just recycled nearly all of the product shots we made for our Olympus PEN E-PL7 review.

We didn't ... but we could have.
That doesn't mean the PL8 is a bad camera. It's just very similar to the previous model.
Image quality is also very similar between the PL8 and PL7 ... which is a good thing. The PEN E-PL8 creates strong photographic quality in outdoor scenes, with accurate colors, sharp focus, and good exposure levels. There's a little bit of noise in high contrast areas, but it's not really noticeable unless you're going to view the images at large sizes.
Indoor photos are of an acceptable quality too. We noticed little to no noise at ISO settings up to 800 or 1600. From there, noise steadily becomes more visible. You'll definitely notice noise when viewing images at large sizes at ISO 3200. Noise is noticeable at all viewing sizes beginning at ISO 6400. This is a similar performance level to most beginner mirrorless ILCs.
The good news is the noise remains at an acceptable level for images you plan to use in small sizes or for sharing on social media even at the maximum ISO 25600 setting, which is not always the case for cameras at this price point.
My favorite aspect of the PEN E-PL8 is its ability to work fast. Shutter lag is not a problem, and the Continuous Shot modes are impressively quick.
The PL8's 3-axis sensor-shift image stabilization (IS) system is quite good, making it easy to deal with slight camera shake while shooting.
Movie quality is solid, although you are limited to Full HD recording. Had Olympus chosen to give the PL8 4K/UHD movie recording, that would've been a nice upgrade over the PL7.
If you're someone who likes special effects and filters, Olympus has you covered ... and then some. I have never tested a camera with more special effect options than the PEN PL8 -- more than 10,000 different artistic mode permutations in all. We didn't want to break the Internet, so we didn't include all of them on our Sample Photos page, but we did provide test photos for a good sampling of the primary filters.
Having fun special effect photo options with the Olympus E-PL8 is another way this camera will appeal to those migrating from a smartphone camera. Additionally, you can shoot selfies by touching the tiltable screen when it's rotated 180 degrees, making it operate somewhat like a smartphone camera.
As far as the rest of the PL8's design, it's a good looking camera. It fits well in the hand, and its weight is well-balanced. The small handgrip on the front of the camera coupled, along with the rear thumbpad, make this camera relatively easy to hold. The Olympus PEN E-PL8 has a sturdy feel. No part of this camera feels poorly made.
All of the controls are in good locations, and the mode dial has just the right number of options. Olympus didn't try to cram too many irrelevant shooting modes onto the mode dial. Some of the control buttons on the back of the camera are smaller than I'd like to see though. They're difficult to press accurately because of their small size, including the movie recording button.
As this is a camera aimed at beginners, you shouldn't expect a huge number of control buttons. In fact, the button layout of the E-PL8 looks a lot more like a beginner-level fixed lens camera than an ILC. But you can make complex changes to the camera's settings -- including accessing full manual controls -- through the on-screen menus. It takes a bit longer to make these changes using the menus on the screen than it would with dedicated buttons and dials, but you can make use of almost any manual control setting you want this way.
Having said that, the menu layout of the Olympus PL8 is not easy to use. The organizational structure is poor, making it difficult to find the exact settings you want until you've worked with the camera for a while. And you cannot use the touch screen to make menu selections, as touch control is limited to activating the shutter, setting the focus point, and scrolling through stored images. This further complicates using the menus.
Another disappointment is that the PEN E-PL8 does not include a built-in flash unit, which is a bit of a hassle. Olympus did include a basic detachable flash unit in the box that you can slide onto the PL8's hot shoe, but you'll have to remember to carry the flash with you when taking the camera out.
As far as battery life goes, my tests showed the PL8 will give you 300-350 shots per charge, which is pretty good for a thin camera. And Olympus included a separate battery charger with this camera kit, which is helpful for those who'd like to purchase a second battery.
Bottom Line

I found a lot to like with the Olympus PEN E-PL8 during my tests. This camera is easy to use, yet it also contains plenty of manual control features for advanced photographers who are willing to dig through the poorly organized on-screen menus. The PL8's image quality is good in a variety of shooting situations, even though this camera is limited to 16.1MP of resolution. With the ability to record photos through the touch screen and with a rotating LCD screen, you can use the E-PL8 a lot like a smartphone camera, including shooting selfies. And the PL8 is a good looking camera. Now, if we never knew the Olympus PEN E-PL7 existed, we'd be pretty impressed with the PL8. Unfortunately, the PL8 and the PL7 are nearly identical cameras. This means it's tough for us to recommend that you pay a premium for the PEN PL8 when you can still buy the nearly identical, but older, PEN PL7. For those seeking a first digital camera, the mirrorless PL8 (and PL7) will work really well. So we'd suggest shopping around to find a good price on either camera if you've decided to go with an Olympus mirrorless ILC model.