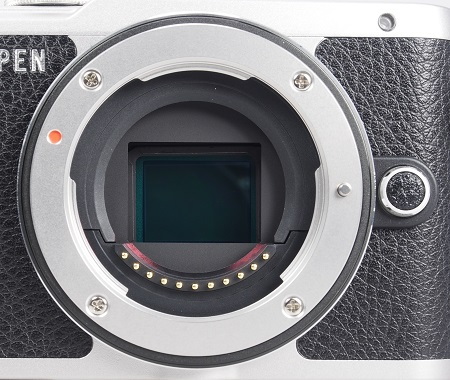 Olympus retained the same image sensor and image processor from the PEN E-PL7, released a couple of years ago, when putting together the PEN E-PL8. Both models feature a 16.1-megapixel Live MOS Four Thirds sensor and Olympus' TruePic VII image processor. The image sensor measures 17.3 by 13.0 mm in size.
The PL8's image sensor has a native 4:3 aspect ratio, meaning it will record at the highest resolution when shooting at 4:3. However, you also can shoot at other aspect ratios, including 1:1, 16:9, 3:2, and 3:4, using the camera's software. You'll be able to record at small, medium, and large resolutions within each aspect ratio. And you can shoot in JPEG, RAW, or RAW plus JPEG image formats.
The lens mount is a Four Thirds mount, allowing for use of any Four Thirds compatible lens. You'll line up the red dot on the lens mount with the red dot on the lens to attach a lens. To the right of the lens mount is the lens release button.
The AF illuminator/self-timer lamp is to the upper right of the lens mount.
The Olympus E-PL8 has control buttons and dials on the top panel of the camera.
On the far left is the hot shoe, where you'll connect the portable flash unit (included with the camera kit) or an electronic viewfinder (not included).
The mode dial is to the right of the hot shoe. It's small, but it still has all of the settings you'll need. There's no extra options that just serve to make the mode dial larger, yet aren't all that useful. The mode dial options are
To the right of the mode dial is the shutter button. It's an average size and it works well. Surrounding the shutter button is a command dial that you can use to scroll through menus and saved photos more quickly.
On the far right is the power button. When the camera is powered on, you'll see a blue light in the middle of the button.
Olympus includes a small detachable flash unit (model number FL-LM1) with the PEN PL8. After attaching the flash to the hot shoe, you'll lift the head upward at a 45-degree angle when you want to use the flash. The flash will not activate unless the flash head is raised upward. You can shoot photos with the flash in the downward position, but the flash just won't operate.
A platform on the bottom of the flash slides onto the hot shoe bracket. You can see the edges of the hot shoe bracket at the top of this photo. There's also a rectangular port on the back of the Olympus camera, which is visible in the center of this photo. The portable flash unit contains a male connector that will slide into this port, and the platform slides into the hot shoe bracket at the same time.
This included flash unit has a guide number of 7 (ISO 100 · m) / 10 (ISO 200 · m).
When you're ready to remove the portable flash unit from the hot shoe, you'll need to press the unlock button on the left side of the flash and then slide it backward off the hot shoe.
There's a lot to like with the Olympus PEN PL8 camera's LCD screen. It offers 1.037 million pixels of resolution, which is an above average number and yields a sharp display. It measures 3.0-inches diagonally. Best of all it offers touch capabilities, which can simplify the operation of this camera for beginners, as they can just press the screen to record a photo, similar to a smartphone camera. Unfortunately, the touch features are very limited. You cannot make menu selections or change settings through the touch screen.
Olympus gave the PEN E-PL8's display screen tiltable capabilities too. You can tilt it upward to 80 degrees and downward to 180 degrees. When you tilt the screen 180 degrees downward, it will be visible from the front of the camera, allowing you to shoot selfies.
The OK button is in the middle of the four-way button. You'll use it to save menu screen selections. And it most shooting modes it opens a popup menu to give you access to commonly used settings.
The bottom two buttons only work with Playback mode. Press the button on the bottom right to open Playback mode. When you want to delete a photo from the memory card, press the button on the bottom left with the trash can icon.

On the right side of the camera (as you're holding it) is a compartment with the USB and HDMI ports. The compartment door rotates on four plastic hinges. The compartment door snaps back in place when you're finished.
The battery slot and SD memory card slot are both on the bottom of the camera behind a hinged compartment door that locks in place with a toggle switch. The compartment door opens about 80 degrees before it has a noticeable hitch that allows it to open past 90 degrees for an easier insertion of the battery and memory card. This hitch makes the door seem a little flimsy, but it's actually tightly secured to the camera body. The hitch is part of the door's design.
Olympus rates the PL8's battery for 350 shots per charge. My tests showed that number is relatively accurate, perhaps just a little high. The camera has a good battery performance level versus other mirrorless interchangeable lens models.
Olympus ships a separate battery charger with the PEN E-PL8 that plugs into a cord for a wall outlet. The cord is surprisingly long, giving you some flexibility in how you use the charger.