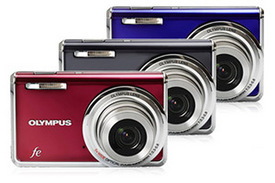 Olympus has introduced a new member to the "FE" line of cameras with the 5020. This is a 12 megapixel camera that sports a 5x super wide angle zoom lens. It also has a 2.7in LCD screen that is used to frame your pictures as well as scroll through menus and change settings. The FE-5020 also has the TruPic III image processor, Magic Filter (see an example of the Pop-Art filter on the samples page) ,digital image stabilization and face detection which can track up to 16 faces.

Handling the 5020 is very easy. It is compact enough to fit in a pocket comfortably and light enough that it won't feel cumbersome. The camera is easy enough to operate, all the controls are spaced great even for my big thumbs. All of the buttons on the camera are well placed and easy for the right hand to access. The information button on the back is a great addition for anyone new to digital cameras or the newer features that the 5020 offers. I found the descriptions easy to understand. The "camera" button is also used to gain quick access to the shooting modes. I found it to be tricky as I would scroll to fast and have to take extra "laps" to get to the mode I wanted.

Taking up most of the back of the camera is the 2.7-inch LCD screen. Since there is no optical view finder, this is how you will be framing and viewing your images as well as navigating the menus. Featuring 2 steps of brightness adjustment and a back-light boost, the screen is bright and clear enough to see in all lighting conditions, including direct sunlight. With 230,000 pixels, you will also like the amount of detail that you see when you are viewing and editing your images.

Performance from the 5020 is on the disappointing side. While going from turning on the camera to taking the first shot took only 1.7 seconds, the time it takes from shot to shot was huge at 3.7 seconds. Shutter lag, the time from when you press the shutter release till the image is captured, was almost instantaneous when the camera was pre-focused. When the button was pressed down all the way (skipping pre-focus) , it took 3/10 to 4/10 of a second. Using the flash in program mode it took about 20 seconds to snap off five pictures. These numbers all add up to a slow camera especially when there are no continuous shooting modes offered. All of our tests were completed using an Olympus xD M+ 2GB picture card, program mode, flash off, 12-Megapixel Fine quality and all other settings at the factory defaults unless noted otherwise. Times may vary depending on lighting conditions, camera settings, photographer response, media, etc.

Quality from our outdoor images is pretty good. The camera really handled Chromatic Aberrations very well (check out our dictionary in the knowledge center if your new to this phrase). There is a small amount of detail loss in the bricks of the theater, but no more than should be expected from a compact point-n-shoot. For all accounts, the pictures are clean and clear when there is plenty of sunlight; and that's what you want. The evening shot of the three children was taken with the flash at a pretty close distance, due to the fact that the flash on this camera is very weak and rendered itself useless beyond 4-5 feet. We also saw a good amount of red-eye in our flash portraits. The one thing that I was impressed with is the 5020's ability to use available light as opposed to using the flash. This took the use of a monopod and a steady hand, but it really helped the camera capture pleasing images in these conditions. The image with the cabin and the fireworks is a pretty good example of this.

Indoors, the plot of our review does not change. We still have the hero: the cameras ability to use natural light, and we have our villain: the flash. I was impressed with the 5020's ability to take photos in the available light of any given situation and create a "decent" image. Contrast that with the fact that the flash, even indoors, is unusable for anything beyond about 4-5 feet away. The best evidence of that is the picture of the mother and son. This was shot at about nine feet away and with fairly decent natural light. Another good comparison is the two shots of the Bugatti. Both images were shot at the same ISO setting the only difference being that in the first image the flash was turned off. The reason we use the word decent to describe the indoor images is that from our testing, the 5020 also seems to have a problem handling noise even at the lowest ISO settings. Take a look at the M&M photo shot at 64 ISO in the section where the football meets the Red of the M&M man himself. Also, you can see that detail loss starts at the 400 ISO setting, and while I believe you could make a usable 4x6-inch print out of a shot taken at the 800 ISO setting, ISO 1600 is unusable in my opinion.

Movie mode allows for the capture of 640x480 or 320x240 sized movies at 15 or 30 fps with audio. I was disappointed that our movie sample was dark and grainy despite lots of light in the room from three windows and an overhead light. Audio for the clip is via a built-in microphone, which did a pretty good job at picking up voices that were at a distance. The microphone can also be used to add voice clips to still images.

Powering the FE-5020 is a tiny LI-42B, a 3.7v, 710mAh rechargeable Lithium Ion battery and charger. Olympus claims that this battery will allow the camera to capture up to 150 images. I was able to capture around 100 images and one video with some viewing on the camera, but I was not able to complete all of my testing without charging the battery again first. Because of this we highly recommend that you keep a second battery pack on hand at all times.

Bottom Line - Keeping in mind that this camera has a MSRP of around $160.00, which puts it in the entry-level market, the Olympus FE-5020 gets a "C" from me. I never really connected with this camera. Little things like a very short battery life, tons of waiting for images to process and a slow proprietary xD storage card contributed to this. Bigger issues include a weak flash, and in my opinion a lack of any vibrancy in our sample images, along with a good amount of noise that found its way into a lot of our spontaneous snap-shots. The FE-5020 can capture nice pictures, but this involves some work; like carrying around a monopod or only shooting subjects in near perfect lighting.