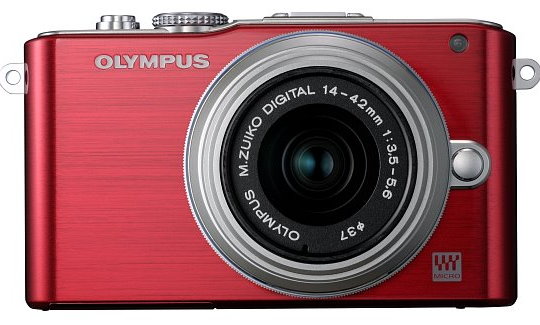 Olympus announced three new additions to its PEN line of compact digital cameras, which is now in its 5th generation. Replacing last gen's E-PL2, we have the Olympus PEN E-PL3, the PEN compact system middle sibling camera. The idea for this model is that it's the size of a compact point-and-shoot, yet it affords users the ability to swap-out lenses. Like the more expensive E-P3 and more affordable E-PM1, the E-PL3 features a 12.3 Megapixel Live MOS Image Sensor, a brand new image processor (the proprietary TruePic VI), a revised Dust Reduction System, and a super high 12,800 ISO capability.
The Olympus E-PL3 will be sold in two kit forms, featuring one of these lenses: 1) a re-sculpted M.ZUIKO DIGITAL 14-42mm II R f3.5/5.6 II R zoom lens (28mm-84mm equivalent) or 2) the M.ZUIKO DIGITAL 17mm f2.8 prime lens. Both lenses are part of Olympus' new MSC (Movie & Still Compatibility) line; their intent to to provide "near-silent operation, enabling you to shoot HD movies in stereo with amazing clarity." As such, the E-PL3 features 1080/60i HD movie recording.
The E-PL3's Autofocus capabilities were designed to rival the Olympus E-5 dSLR, thanks to its FAST (Frequency Acceleration Sensor Technology) Autofocus Tracking System. FAST features 35 separate focus points, which can be divided into selectable 3x3 groups. Looking over your pictures, or taking them from any angle, will be made simple by the (exclusive to the E-PL3) titling 3.0" LCD screen (460K pixels). Like previous versions of the PEN cameras, the E-PL3 has a number of "Art Filters", which can be applied in combinations up to 10 in camera while shooting. Specific lists of Art Filters will vary per model, but may include Diorama, Pop Art, Soft Focus, Pale & Light Color, Light Tone, Grainy Film, Pin Hole, Cross Process, Gentle Sepia, Dramatic Tone, Star Light, and White Edge.
Jumping onto the 3D fad, Olympus has added the ability for all of the new PEN cameras to shoot in 3D Photo Mode, which allows for the camera to automatically create a 3D images in landscape or macro shooting situations. To make this happen, users will select 3D Photo Mode, release the shutter, and pan the camera until it automatically takes the second image.
Olympus PEN E-PL3 Features Include:
Although prices have yet to be announced, the Olympus PEN E-PL3 Body will be available in two kit forms with M.ZUIKO DIGITAL ED m14-42mm II R f3.5/5.6 Zoom Lens (24-84mm equivalent); or M.ZUIKO DIGITAL ED m17mm f2.8 Prime Lens. Optional lenses will include an M.Zuiko Digital ED 12m f2.0 lens and an M.Zuiko Digital ED 45mm f1.8 lens. And, because the E-PL3 does not feature a built-in flash, you may want to consder adding the optional FL-300R Compact Flash (available in silver).
Additional Views: